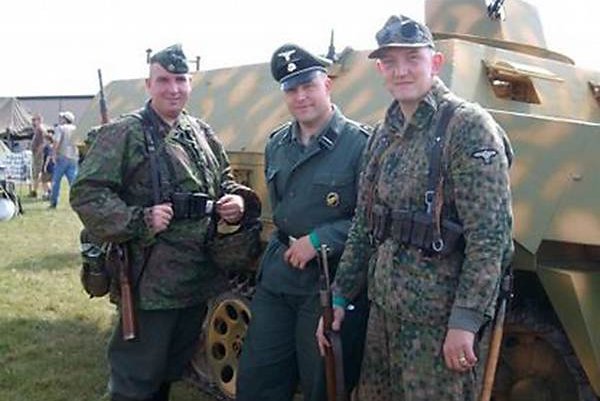 The ensuing outrage prompted Philadelphia police to release a statement saying the matter had been reported to internal affairs. The department said it does not condone anything interpreted as "offensive, hateful or discriminatory in any form." Yet, it acknowledged it does not have a policy regarding tattoos.

A photo appears to show the Nazi Party's partieadler emblem tattooed on the left forearm of an officer identified as Ian Hans Lichterman, 39. The party emblem features an eagle, with outstretched wings, holding a wreath containing a swastika. The photo shows the eagle topped by the word "Fatherland," but it is not clear if the tattoo includes the enwreathed swastika at the bottom, which cannot be seen in the photo.

The photos were posted to Facebook by Evan Parish Matthews, who claimed he took them at a Black Lives Matter march held during the Democratic National Convention. Matthews said Lichterman was one of about 100 officers who blocked an entrance to a major intersection during the march.

In his Facebook post, Matthews urged people to call Northeast Philadelphia's Second District police headquarters and inform them that "employing a police officer with a white-supremacist, Nazi tattoo is unacceptable." His post has been shared more than 3,000 times.

A message sent to Matthews was not immediately returned.

In a Facebook post late Thursday morning, Matthews said he filed a complaint with the department, that included the following:

The mere decision to get this tattoo, and choose his profession, casts disperses any faith in Officer Lichtermann's [sic] ability to do his job in a non-oppressive/racist manner. It's intimidating display, and its present notoriety on social media have permanently marred Officer Ian Hans Lichtermann's reputation and, for anyone knowledgeable of his history, made him a deadly embodiment of police-terror.

Philly Antifa, an antifascist blog, posted several other photos, saying Lichterman previously was outed as a member of the neo-Nazi organization Blood and Honour when several neo-Nazi websites were hacked between 2010 and 2012. The blog claims Lichterman later left the Philadelphia Police Department to take a security job in the Middle East.

The Philadelphia Police Department is aware of the image being displayed and circulated on social media. The post and photograph of the officer with tattoos displayed on his forearms was brought to our attention this morning, and we have forwarded it to internal affairs for review.

Currently, the department does not have a specific policy regarding the wearing /displaying of tattoos; however, the department will quickly move to assess and determine the appropriate policy moving forward.

The Department does not condone anything that can be interpreted as offensive, hateful or discriminatory in any form. This is a very sensitive topic for both the citizens that we serve as well as the officers providing service to the public. We must ensure that all constitutional rights are adhered to while at the same time ensuring public safety and public trust aren’t negatively impacted.

Mayor Jim Kenney followed with his own statement, saying he found the image disturbing.

"The imagery on display in the tweet is disturbing. I find it incredibly offensive, and I know many others do as well. This image is particularly offensive to our WWII veterans who fought valiantly to free Europe from Nazi Germany, as well as all victims of Nazi atrocities. I understand that the PPD will launch an internal investigation, and that should run its course. In this environment — in which open, honest dialogue between citizens and police is paramount — we need to be building trust, not offering messages or displaying images that destroy trust."

Efforts to reach Lichterman by phone were unsuccessful; a message said the number was no longer active.

Earlier Thursday, many people voiced their concerns on Twitter.

Call Philadelphia Police 2nd Precinct & let them know a cop w/ a white-supremacist, Nazi tattoo is unacceptable. The number is 215-686-3020.

.@PPDCommish hi can you please explain why one of your officers, ian hans lichtermann, has a nazi tattoo on him? thx pic.twitter.com/CK9nAuiCGW

The parteiadler, also known as the Nazi Eagle and Nazi War Eagle, is included in the "Hate Symbols Database" published online by the Anti-Defamation League.

The symbol is based loosely on the traditional German coat of arms and was first used by the Nazi Party in the 1920s. According to the database, "Occasionally, extremists will leave the circle blank where the swastika normally would appear; this seems to be more common in countries where the swastika is prohibited."

The Philadelphia Police Department website includes a seven-page directive establishing guidelines for "reporting and investigating bias incidents." Under a section of that document with the heading "determining whether an incident is a bias incident or ethnic intimidation" the department lists six facts that can point toward an incident being a matter of racial or ethnic bias.

Guideline No. 6 reads: "Offender has hate inspired tattoos, literature, or is dressed in regalia representing a hate group."