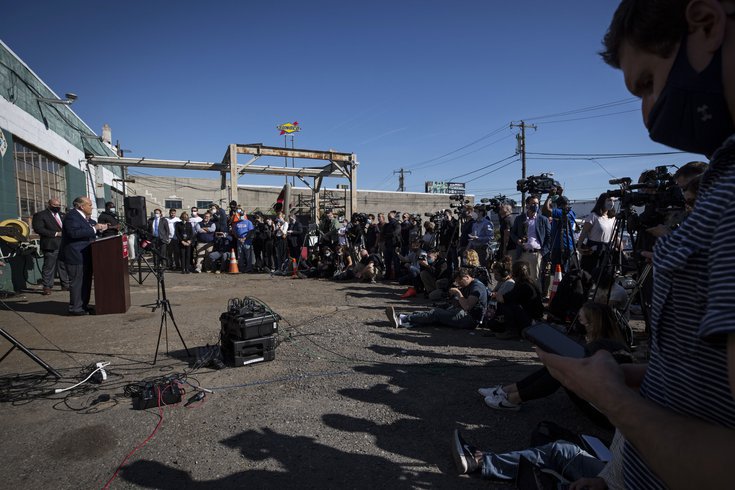 The parking lot of Northeast Philadelphia's Four Seasons Total Landscaping became the unlikely scene of a political storm on Nov. 7, 2020, as Trump campaign attorney Rudy Giuliani mounted baseless claims of widespread voter fraud. The small business will be featured in an MSNBC documentary that premieres Nov. 7.

Philadelphia's role in the 2020 presidential election will go down in history not just for the city tipping Pennsylvania toward Joe Biden, but for delivering one of the most perplexing and hilarious moments of any U.S. political campaign.

The impromptu press conference that Donald Trump's campaign lawyer Rudy Giuliani held at Four Seasons Total Landscaping was a doozy for the ages.

As the election slipped away, the Trump campaign frantically went into "see what sticks" mode and slapped together a briefing for Giuliani to wave around nonexistent evidence of widespread voter fraud. The tactic failed miserably both here and across the country in the months that followed, culminating in the Capitol insurrection and a sobering appraisal of the state of democracy in the United States.

How this outlandish roadside event transformed the brand of Four Seasons Total Landscaping is the subject of a new MSNBC documentary that will premiere Nov. 7 to mark its anniversary, according to Variety.

"I can't wait to see how audiences react to the film and I am incredibly excited to be working with the good folks at MSNBC," Stoudt said. "But whatever happens, I'm already confident it's the best film ever made about a landscaping company."

To anyone piecing together the madness of that Saturday last November, it seemed to only make sense that the intended venue for the press conference was the Four Seasons Philadelphia hotel in Center City, which Condé Nast Traveler just named one of the 50 best in the world. Not so much, the hotel confirmed after a misleading tweet from former President Trump.

Instead, a horde of major news networks and political bigwigs descended on State Road in Northeast Philadelphia, where a family-run landscaping business was suddenly thrust into the national spotlight as part of a bizarre political sideshow to Biden's victory.

The documentary celebrates the way Four Seasons Total Landscaping ingeniously recast its role in the event, capitalizing on a thirst for feel-good irony and solidarity. Through it all, the business has mostly been propelled by political opponents of the very people who paid them for the privilege of embarrassing themselves in their parking lot.

Exactly how and why the Trump campaign moved forward with a slapped together press conference at Four Seasons Total Landscaping has remained a subject of debate, even among those who were close to the situation.

"This is all very us," one Trump campaign official told New York Magazine of the internal chaos in the president's inner circle, whose primary rule of engagement is to stridently lie. "I'm not shocked or surprised at all."

With this documentary, it appears we'll at last get some definitive answers.

"FSTD chronicles the stranger-than-fiction story from inside the company's walls, reveals how agreeing to host the press conference nearly cost them everything and tells the inspiring tale of how they turned near disaster into a quintessential American Dream success story," MSNBC said of the project. "FSTD also finally answers the question everyone has been asking since Nov. 7, 2020 — What really happened?"