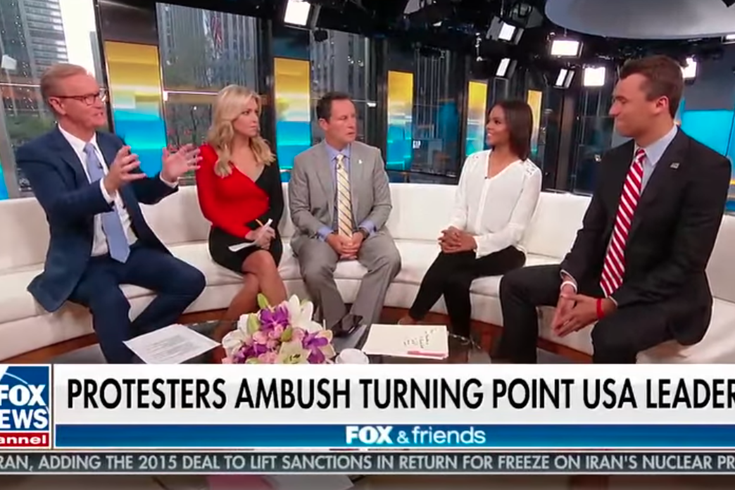 Candance Owens and Charlie Kirk joined FOX and Friends on Tuesday at 6 a.m. to discuss the incident in Philadelphia involving ANTIFA protestors.

After Charlie Kirk and Candace Owens were confronted by a group of ANTIFA protesters outside a breakfast joint in Philadelphia on Monday, the conservative pair from Turning Point USA took to social media and Fox News on Tuesday, calling for more public outrage to the incident.

"Imagine if people in Trump hats were yelling at a young black woman, screaming at her because of her political affiliation," Owens said on "Fox and Friends" Tuesday morning. "Do you guys actually need a piece of legislation to tell you that this is wrong? To tell you that harassing people based on who they support politically is wrong?"

Kirk and Owens had been in Philadelphia for business meetings and had stopped into Green Eggs Cafe in Center City for breakfast. Apparently it wasn't until after they ate that a group of ANTIFA protesters materialized outside of the restaurant and "attacked" the pair, Owens said.

They took to social media after the incident, posting videos of protesters yelling and chanting and Kirk being doused with a bottle of water. Kirk is also now alleging that an egg was thrown at him, as well. He had told PhillyVoice on Monday that he chose not to press charges.

Was this picture of a white Democrat using a megaphone to shout violent rhetoric into the ear of a black woman taken in 1965?

NOPE! It was taken today, folks.
A picture is worth a thousand words. pic.twitter.com/iCVsEyBckx

"They sent out some sort of a bat signal, which said that we have found the conservatives, come and harass them, and that's exactly what they did," she said on FOX and Friends. "They descended very quickly, they mobilized."

Owens also asserted that the protesters were paid to be there, calling it "a well-funded effort" on a Monday morning at 8 a.m.

"We don't want to play the victim card, that's very important, but we do want to warn the American people that this is the new face of the democratic party," Kirk added.