The polarizing statue wasn't on the Mummers Parade route, but represents the lone controversy of the day 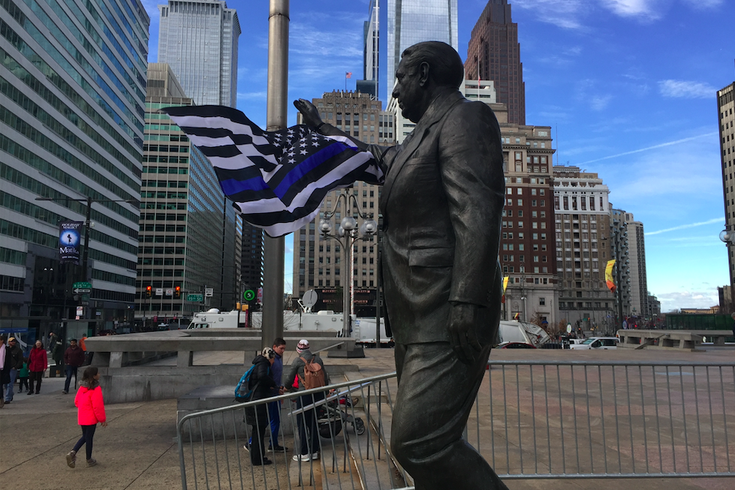 Just off the parade route, a 'Blue Lives Matter' flag is tied to the Frank Rizzo statue outside the Municipal Services Building.

The Frank Rizzo statue wasn’t on the 2019 Mummers Parade route Tuesday, but that didn’t stop it from being involved in a minor controversy during the New Year’s Day extravaganza.

As the city still tries to figure out when and where to move the 8-foot monument of the former mayor and police commissioner, someone affixed (with Velcro) a “Blue Lives Matter” (or thin blue line) flag to the statue’s right arm sometime on the morning of the parade.

It wouldn’t remain there for long.

Just after 3 p.m., Joe Cox – the bicycle messenger running for an at-large City Council seat – ripped down the flag when Philadelphia police officers standing nearby were a little distracted.

“I don’t support racism,” Cox told PhillyVoice over the phone when asked why he’d taken the flag down about 10 minutes after he'd done so. “I was afraid of the cops being there since I didn’t want to go to jail with the two dogs I had with me.” 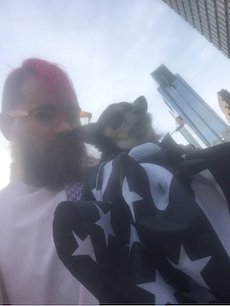 Joe Cox holds the 'Blue Lives Matter' flag he removed from the Rizzo statue on Jan. 1, 2019.

According to Cox, the officers assembled on the north side of City Hall more or less shrugged it off, though.

“One of them said ‘we didn’t put it there’ and another said ‘good job,’ but I don’t know if he was being a smart ass,” Cox said. He had posted a photo of the flag on social media before taking it down. “They were too busy to make a thing about it, but I don’t know what they’d really do about it anyway.”

The answer was apparently nothing on New Year’s Day, as Cox didn’t vandalize the monument, only tearing the Velcro strip apart and making off with the flag.

This isn’t the first time the statue has been used as a prop for political statements.

In August 2017, the phrase “black power” was spray-painted on the statue. (Wali Rahman received 50 hours of community service after some charges were dropped by the Philadelphia District Attorney’s Office.)

That came one year after activists draped a white, KKK-like hood over the statue’s head and around the same time City Councilwoman Helen Gym called for the statue to come down.