Friday injury update: Three Eagles out this Sunday vs Steelers 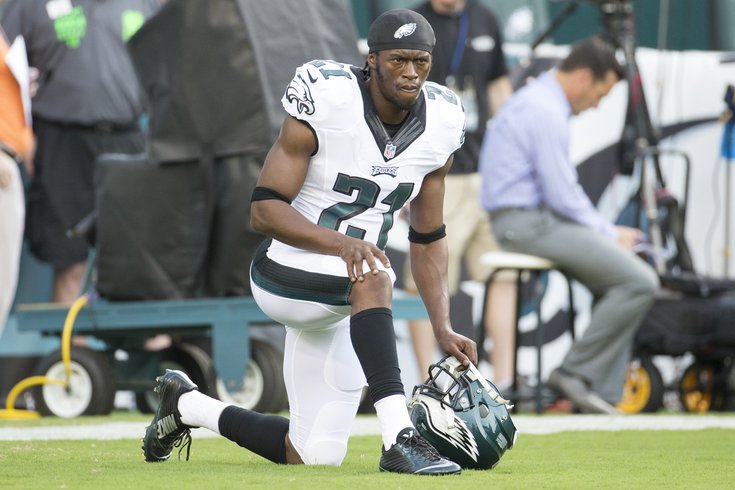 The Eagles' cornerback spot will be thin without Leodis McKelvin.

The Eagles will be without TE Zach Ertz (rib), Leodis McKelvin (hamstring), and Isaac Seumalo (pectoral) this Sunday against the Pittsburgh Steelers. Mychal Kendricks (nose, quad) is expected to play.

With McKelvin out, the Eagles will only have three cornerbacks active on game day. That could be problematic against a Steelers passing attack that includes a top five type of receiver in Antonio Brown as well as other talented receivers, as we noted in our five matchups to watch.

With Ertz out, the Eagles are likely to once again lean on Trey Burton as a receiving weapon from the tight end spot, as Burton played well Week 2 against the Chicago Bears.

Seumalo was inactive in each of the Eagles' first two games this season, and he will be inactive once again Week 3. Doug Pederson said that free acquisition Stefen Wisniewski is likely to start at LG Week 5 after the bye against the Lions if Lane Johnson is suspended. In that scenario, LG Allen Barbre would kick out from LG to Johnson's spot at RT.

Doug Pederson said that Ertz, McKelvin, and Seumalo are all expected to return for the Eagles' Week 5 game against the Lions.

• CB Senquez Golson: Golson was the Steelers second-round pick in the 2015 NFL Draft. He suffered a Lisfranc injury during training camp.

• C/G Cody Wallace: Wallace started all 16 games a season ago for the Steelers. He is the primary backup at all three interior OL spots. Should the Steelers lose an interior offensive lineman, they'll be thin there against Fletcher Cox and Bennie Logan.

• FB Roosevelt Nix: Pittsburgh will likely be without their fullback in short yardage situations.

• OG Ramon Foster: Foster is the starting LG. If he cannot go, as noted above, the Steelers will also be without their primary interior line backup in Cody Wallace.

• RB Le'Veon Bell: Bell was suspended for four games for violating the league's substance abuse policy, which was later reduced to a three-game suspension, meaning that the star back will still miss the Week 3 matchup against the Eagles.

• WR Martavis Bryant: Bryant was suspended for the entire season for violating the league's substance abuse policy multiple times. Bryant had 765 receiving yards and 6 TDs in 11 games in 2015.