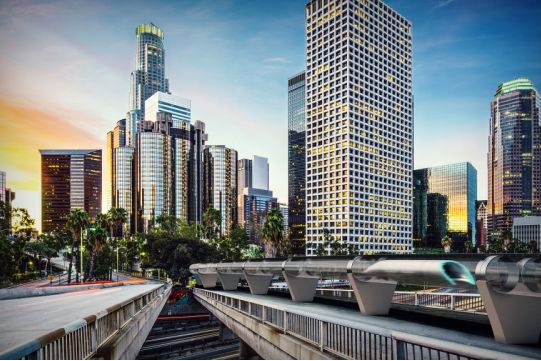 Construction on Elon Musk's blazing fast tube transportation reportedly will begin in 2016 at site between San Francisco and Los Angeles.

Back in August 2013, Tesla Motors CEO Elon Musk teamed up with SpaceX to publish a 57-page white paper detailing the design and technical features of a transportation system that would move at near supersonic speeds, improving safety and slashing costs.

The tantalizing Hyperloop—an above-ground tube system that can shuttle capsules along at up to 800 miles per hour—has since drawn a lot of attention as a futuristic solution for sustainable and weather-immune transportation. Skeptics' initial doubts about the cost and feasibility of the technology in practice have lingered, but on Thursday a big step was made toward the construction of a prototype between San Francisco and Los Angeles.

The partnerships with Oerlikon and Aecom are a big endorsement, suggesting the prototype may be a real thing, not an idea whipped up by Don Quixote. It shows the project is worthy of time and effort from two publicly traded companies with shareholders to answer to. And these companies know what they’re doing.

That expertise will be paired with the workforce of Hyperloop Transportation Technologies, which is comprised of around 400 men and women who work at places like NASA, Boeing and SpaceX, trading their time for stock options in what could be a revolutionary technology.

Described by some as a pneumatic transport system (PTS), Musk himself explained the Hyperloop as a combination of the Concorde, an air hockey table and a railgun. To put its potential in perspective, airlines list the 337-mile flight between LAX and SFO at 1 hour and 19 minutes. The Hyperloop proposes to commute between downtown L.A. and San Francisco in 30 minutes.

Musk's plan estimated that the cost of the California prototype would be $6 billion, just a tenth of the cost taxpayers are charged for the high-speed railway now under construction between the same two cities. With construction now planned, the accuracy of that low estimate will be put to the test.

Learn more about the Hyperloop in the video below.