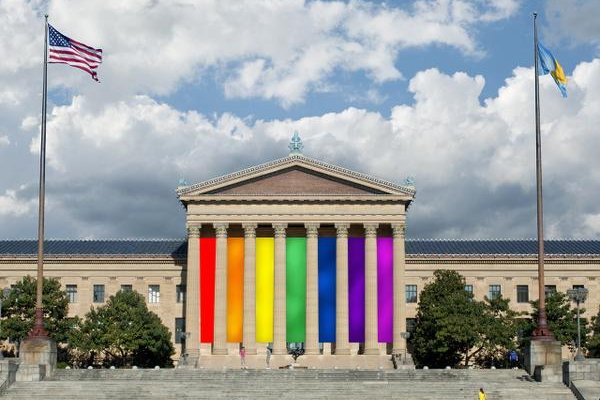 The Philadelphia Museum of Art uses photo editing software to depict banners across its entrance in support of the Supreme Court decision legalizing same-sex marriage.

Reaction to the Supreme Court ruling that same-sex marriage is constitutional Friday, spanned the gamut from emotional gratitude to outright condemnation, as the long battle between gay rights advocates and those who say the institution of marriage is between one man and one woman took a major turn.

The 5-4 decision makes gay marriage legal in all 50 states.

The court ruled that the Constitution's guarantees of due process and equal protection under the law mean that states cannot ban same-sex marriages. The court's ruling can be found here.

Justice Anthony Kennedy, writing on behalf of the court, said that the hope of gay people intending to marry "is not to be condemned to live in loneliness, excluded from one of civilization's oldest institutions. They ask for equal dignity in the eyes of the law. The Constitution grants them that right."

President Barack Obama addressed the decision from Washington, saying it affirms the founding principle that all people are created equal.

"This ruling will strengthen all of our communities by offering to all loving same-sex couples the dignity of marriage across this great land."

Earlier the President called Jim Obergefell, the lead plaintiff in the case before the Supreme Court, while he and his supporters celebrated the ruling outside the court.

"I just wanted to say congratulations," Obama said as CNN broadcast his warm words to Obergefell over speaker phone. He added: "Your leadership on this has changed the country."

Today is a big step in our march toward equality. Gay and lesbian couples now have the right to marry, just like anyone else. #LoveWins

Love won in Pennsylvania one year ago, and today love has won across the United States. - TW #MarriageEquality pic.twitter.com/789SH4DPGD

Jim Kenney, the Philadelphia Democratic mayoral nominee, called the ruling a "tremendous victory," but also a "call to action."

“Philadelphians must rally together and demand a statewide non-discrimination law that protects on the basis of sexual orientation and gender identity and expression," Kenney said in a statement. "As one of the most LGBT friendly cities in the nation, it is our responsibility to continue fighting until complete equality is a reality in every corner of this state and this country."

State Rep. Brian Sims, D-Phila., a civil rights attorney and the first openly-gay member of the General Assembly said he was "thrilled for our country that the Supreme Court has come down on the side of equality."

"At the same time, I am concerned for people who are at risk of getting fired for getting married," Sim said in a statement. "In most of Pennsylvania and many other states, it is still legal to fire someone or deny them an apartment, a hotel room or a table in a restaurant because they are lesbian, gay, bisexual or transgender."

Others condemned the ruling, calling it an overreach by the court.

Archbishop Charles Chaput said the decision was not a surprise, but promised a surprise will come.

“The surprise will come as ordinary people begin to experience, firsthand and painfully, the impact of today’s action on everything they thought they knew about marriage, family life, our laws and our social institutions," Chaput said in a statement. "The mistakes of the court change nothing about the nature of men and women, and the truth of God’s Word. The task now for believers is to form our own families even more deeply in the love of God, and to rebuild a healthy marriage culture, one marriage at a time, from the debris of today’s decision.”

"I think this is something that should be decided by the people of each state and not imposed upon them by a group of lawyers sitting in black robes at the U.S Supreme Court," Christie said. "That being said, those five lawyers get to impose it under our system and so our job is going to be to support the law of the land. ... But I take an oath and the same way I've supported and enforced the law here in New Jersey since our Supreme Court made their 7-0 decision on same-sex marriage and I've supported and endorsed that law, I would have to do the same across the country."

Family Research Council (FRC) President Tony Perkins said "five justices on the Supreme Court have overturned the votes of 50 million Americans and demanded that the American people walk away from millennia of history and the reality of human nature.

“In reaching a decision so lacking in foundation in the text of the Constitution, in our history, and in our traditions, the Court has done serious damage to its own legitimacy.

“No court can overturn natural law. Nature and Nature’s God, hailed by the signers of our Declaration of Independence as the very source of law, cannot be usurped by the edict of a court, even the United States Supreme Court."

Statement on the Supreme Court’s decision on marriage: http://t.co/ZzggeRMQiR pic.twitter.com/qT0nA9LndY

Today, 5 unelected judges redefined the foundational unit of society. Now it is the people's turn to speak #Marriage

There are currently 13 state bans in place, while another state, Alabama, has contested a court ruling that lifted the ban there.

The ruling is the Supreme Court's most important expansion of marriage rights in the United States since its landmark 1967 ruling in the case Loving v. Virginia that struck down state laws barring interracial marriages.

Same-sex marriage opponents might consider adopting laws like one in North Carolina, which allows magistrates to refuse to perform any marriage that they oppose for religious objections, according to the New York Times. In Alabama, one probate judge said his office no longer will issue licenses to anyone, a policy his office adopted in February.

The decision follows rapid changes in attitudes and policies toward gay marriage in America. It was not until 2003 that the Supreme Court threw out state laws banning gay sex. And it was not until 2004 that Massachusetts became the first state to legalize same-sex marriage. Gay marriage has gained increasing acceptance in opinion polls in recent years, particularly among younger Americans.

In Philadelphia, the National Constitution Center quickly amended its gay rights exhibit to reflect the Supreme Court decision, according to CBS3. The museum updated its feedback wall to note that the court "has decided" the case.

"It's a great decision,” former Gov. Ed Rendell told CBS3, recalling a comment from satirist Kinky Friedman when he ran for office in Texas. “He said, ‘Of course gay people should have the right to marry. Why shouldn’t they be as miserable as the rest of us?’"

Reaction to the ruling continued to come in from across the Philadelphia region.

Ted Martin, executive director of the gay-rights group Equality PA, hailed the ruling as part of a “glorious day.”

“This is what Equality PA has worked for for such a long time,” Martin said.

He added, however, that his organization’s work wasn’t complete. The state needed to pass anti-discrimination laws that would prevent gay people from being fired or punished for their sexual orientation.

“Marriage does not guarantee everything,” Martin said. “We know there have been incidents of people being denied service.”

McCarter credited the energy provided by the younger generation that spoke out in favor of gay rights.

“I’m just thankful it came as quickly as it did,” he said.

Congressman Chaka Fattah, D-Pa., hailed the ruling as a "landmark decision" in the fight for equality.

“This is a monumental step forward in our country’s pursuit of equal rights for all," Fattah said in a statement. "Today, everyone who has fought so hard for this moment can stand proud knowing that marriage is a fundamental right. It is a proud day for America, because love has won.”

Other local organizations offered their opinions of the ruling via Twitter:

Check back later for more on this developing story.