Georgia Rep. Jason Spencer screams the n-word, drops trou on 'Who Is America?' 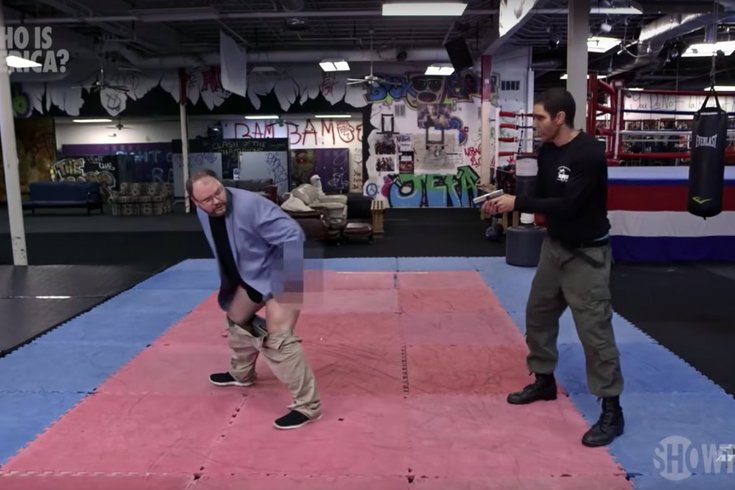 Georgia Rep. Jason Spencer dropped his pants and yelled racial slurs on Showtime's "Who Is America?"

UPDATE: Georgia state Rep. Jason Spencer is resigning following his appearance on the new Showtime series "Who Is America?" during which he screamed a racial slur and made other offensive and embarrassing remarks and gestures.

According to CBS News, the Republican lawmaker's spokesperson said Spencer — who lost a primary election this year anyway — will be stepping down from his post on July 31.

Read the full story about his appearance on Sacha Baron Cohen's show on Sunday below:

GOP state lawmaker Jason Spencer is being urged to resign after he screamed the N-word and made a general idiot of himself on Showtime's latest "Who Is America?" episode.

The program, spearheaded by Sacha Baron Cohen, features Cohen disguised as different characters who dupe politicians and other public figures.

Spencer, who represents the community of Woodbine in southeast Georgia, appeared opposite Cohen, who was dressed as a character named Col. Erran Morad, an Israeli anti-terrorism expert. Spencer, who has pushed for legislation to ban burkas, making it illegal to wear the traditional Islamic garment, thought he was participating in a workshop about spotting terrorists.

"I don't call it a burka ban, I call it an anti-masking ban," he tells Cohen's character in the clip. "Because to win the legal system, you cannot be against the First Amendment."

Cohen tells Spencer he can spot a normal woman in a burka from a terrorist by taking upskirting photos and pretending to be a Chinese terrorist. Spencer believes him.

"Are you crazy? The 'n-word' is noonie! Not this word. This word is disgusting," Cohen said.

"Got it," Spencer replies.

See the full clip below, including Cohen instructing Spencer to "use his buttocks to intimidate ISIS."

Spencer made a public statement to the Atlanta Journal-Constitution, saying, "I deeply regret the language I used at [Cohen's] request as well as my participation in general. If I had not been so distracted by my fears, I never would have agreed in the first place."

Georgia House Speaker David Ralston is now calling for the politician's resignation. Georgia Governor Nathan Deal and others have also spoken out against Spencer.

The actions and language used by Jason Spencer are appalling and offensive. There is no excuse for this type of behavior, ever, and I am saddened and disgusted by it.

The words and actions of Jason Spencer are shameful and disgusting and do not represent the values of the hard-working men and women of the Georgia General Assembly. I join Speaker David Ralston in calling for his immediate resignation.

This is not the first time Spencer has been called to resign. Last year he told former state Rep. LaDawn Jones, a black woman, she would be met not with torches but with "something a lot more definitive" if she continued to push for the removal of Confederate statues, adding, "She may go missing." He said this just a few days after the Charlottesville white nationalist rally, where participants used tiki torches to storm the town.

Spencer, who has been in the Georgia house since 2010, has five months left in his current term. In May he lost his primary election.

"I will finish the remaining five months at my post," he said in a statement.