The vice president was in town attending a fundraiser for U.S. Senate candidate Lou Barletta 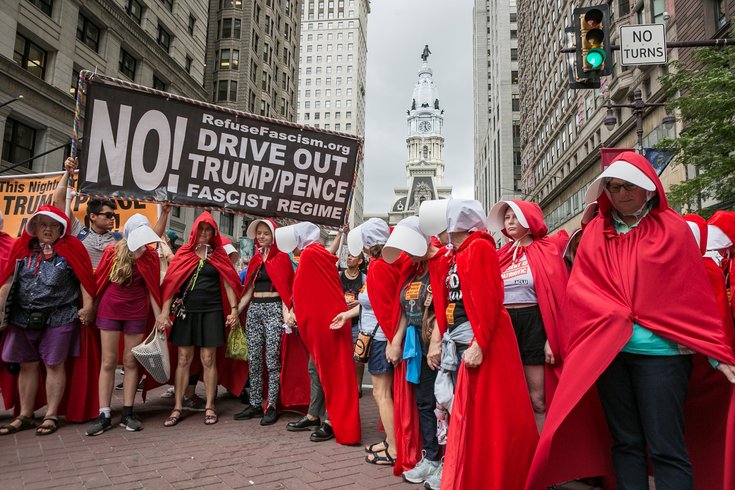 Just after 3:30 p.m. Monday, the second floor at Fergie’s Pub was abuzz with activity unrelated to the preparation of food and beverages on the Sansom Street establishment’s menu.

Boxes filled with red cloaks sat not too far away from stacks of white bonnets and rolls of orange stickers that read “Trump Pence Must Go” which were located near signs that read “We Stand Against Fascism” and “My Body My Choice.”

It was here – as Vice President Mike Pence arrived at the Union League of Philadelphia via an armored vehicle that dropped him off under a tent along Moravian Street – that the “Handmaid’s Tale Brigade” put the finishing touches on a protest that would see hundreds flock to Broad Street.

Here, the women who didn’t get their protest gear before Monday picked up their garments along with a detailed schedule of exactly what would unfold over the next 90 minutes or so.

At 4:30 p.m., they would “gather in groups and stand silently near reminders of power near the Union League.”

Around 5 p.m., they would make their way to the front of the Union League at Broad and Sansom streets, where they would “stand side by side with fellow handmaids, looking at the ground. Spread your hands in front of you, with your palms facing out. Look up at the entrance.”

Then, at 5:30 p.m., organizers would read out the “Refuse Fascism solidarity pledge” as the group of 100 cloaked protesters would “help the handmaid next to you take off her cloak and bonnet,” in a show of togetherness, before being left in a pile on the ground.

Each directive being met – as the women abided by the “exist there silently” mantra – created the sort of protest in which silence served as a powerful counter to the normally raucous tenor of such Philadelphia gatherings, at least for a while.

“Peacefully protesting but actively resisting” are the words that choreographer Erin Agnew used to describe an action.

It was inspired by “The Handmaid’s Tale,” the popular dystopian series on Hulu from which the protesters drew comparisons between the fictional “Gilead” and what they perceive to be the vision of America put forth by Pence and President Donald Trump.

“It’s the vision that Trump and Pence would like to accomplish,” said Agnew in reference to women’s rights potentially being stripped away.

The cloaks were handmade by, among others, Shawn Towey and her quilting group in Montgomery County.

“Whatever we could find at the fabric store,” said Towey of the cloaks.

Some of the bonnets were created by “people who’ve never used a glue gun,” said one attendee.

Less than two hours later, the Handmaid’s Tale Brigade would take their places front-and-center near the barricades, a line of police bicycles and dozens upon dozens of officers who blocked foot and vehicular traffic and execute their plan.

Around them were fellow protesters holding signs like “Sorry to bother you but we need to fight fascism now” and “Colluders!! Welcome to the Soviet Union League.”

“I’m thinking about the video of Donald Trump joking that his vice president wants to hang all the gay people,” said Spencer Koelle, standing not too far away from the handmaids as he held a cardboard sign that read “I’m one of the queers that Pence wants to hang.”

It didn’t take long for the silent protest to gain vocal steam, however. As people walked up the steps to the Union League entrance, boos and chants of “shame” echoed through the air.

In between arrivals, chants like “Hey Hey, Ho Ho, Trump and Pence have got to go” and “Lock him up” preceded the handmaid’s throwing their bonnets and cloaks into a pile in the intersection.

“This is the beginning steps of fascism, when it can still be stopped,” yelled organizer Samantha Goldman of Refuse Fascism Philly. “We don’t want to wake up when it’s too late. It’s up to us to drive out this regime.

“People need to plant themselves in the streets in mass, sustained non-violent resistance. We’re going to be humanity’s saviors.”

At 5:45 p.m., as the protest continued out front, Pence made his way out of the building to that Moravian Street tent. His car would pull onto 15th Street at the rear of the building and make a right on Walnut.

Unless he looked out the windows while inside attending that fundraiser for U.S. Senate candidate Lou Barletta, he would never see what was happening on Broad with his own eyes.