Pence will appear at a 5 p.m. fundraiser for Republican U.S. Senator candidate Lou Barletta at the Union League on South Broad Street in Center City. Pence's visit comes a week after President Donald Trump returned from a controversial visit with European leaders and sitdown with Russian President Vladimir Putin.

Protesters with at least six Philly-area organizations – Refuse Fascism Philly, the Philadelphia and Delaware County chapters of NOW, Philly UP, the Green Party of Philadelphia and NextGen Pennsylvania – will gather at Broad and Sansom streets to demand “This Nightmare Must End: The Trump/Pence Regime Must GO!”

According to Refuse Fascism Philly, 100 women will wear garb like that worn in the popular dystopian series on Hulu to "say no to the Trump/Pence version of Gilead." 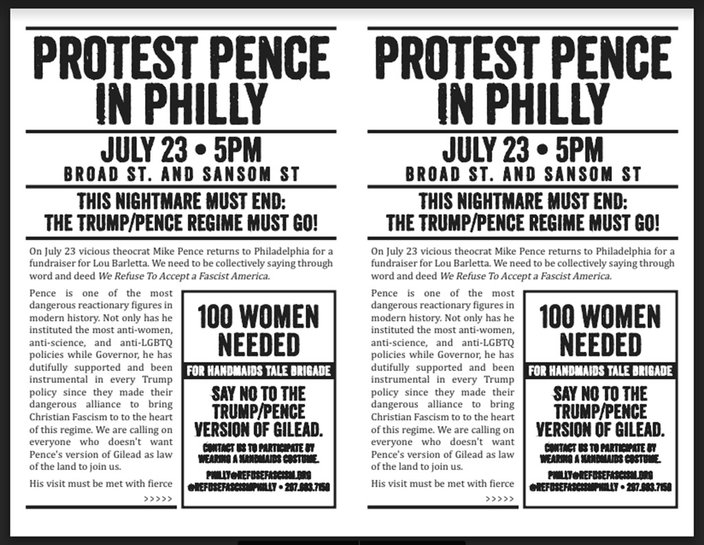 A flyer seeks women to participate in the “Handmaid's Tale Brigade” at Monday's event to protest the visit of Vice President Mike Pence to Philadelphia.

On June 19, hundreds of protesters demanded an end to the Trump Administration's policy of separating (and detaining) immigrant children from their families. Refuse Fascism Philly leaders term that policy the "terrorizing of immigrants."

Protesters are also targeting the recent nomination of Judge Brett Kavanaugh to the Supreme Court, who if confirmed is expected to support the end of Roe v. Wade, the landmark abortion ruling granting women and girls the right of abortion and birth control. 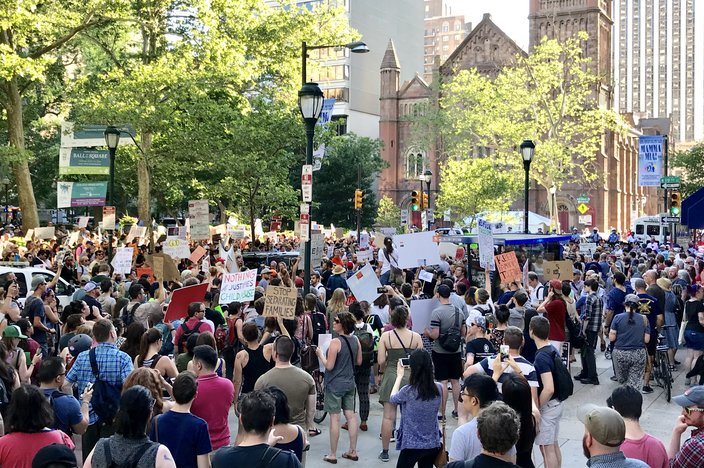 Protesters took over the 1800 block of Walnut Street, near the Rittenhouse Hotel, during Vice President Mike Pence’s visit to Philadelphia on June 19, 2018.

"Nothing short of removing this whole illegitimate regime from power will stop this nightmare," said Samantha Goldman, a Refuse Fascism Philly organizer, in a statement. "If we allow this regime to get away with caging and torturing children, they know there is nothing they can't get away with. We must not allow them to pack the Supreme Court and wipe out women's right to abortion, LGBTQ rights, and more and worse.

"This is a shock we cannot normalize," she added. "This is a regime that must be driven from power. Together, we must be the ones that do it.”