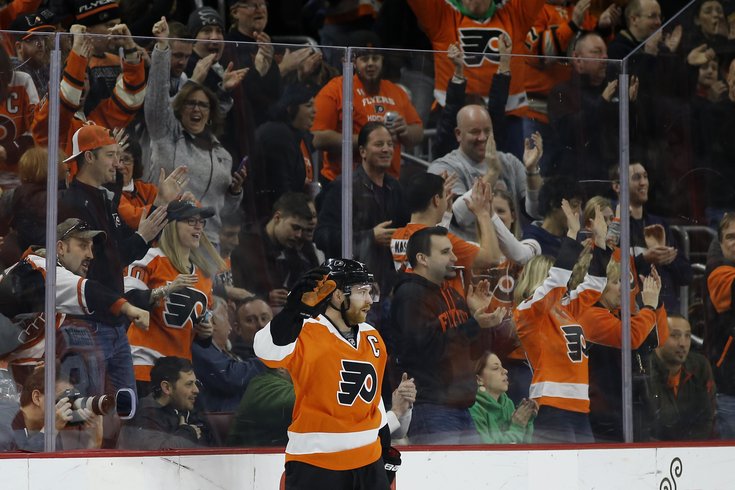 Philadelphia Flyers captain Claude Giroux reacts after scoring a goal for his 500th career point during the first period.

For the second game in a row, the Flyers were able to pick up two points against a Western Conference opponent, beating the Coyotes, 4-2, at the Wells Fargo Center. And just like in their 3-2 win over the Wild on Thursday night, it was a combination of unlikely scorers (except for one) and strong play in net by Michal Neuvirth that made the difference.

Starting for the third game in a row — although the Flyers say starter Steve Mason is healthy — Neuvirth was again spectacular, stopping 29 of Arizona’s 31 shots.

Here are some observations from the win:

•    The Flyers (28-22-11) scored three of their four goals in the first period, something that's been a rare occurrence this season. The first came thanks to a pair of young forwards, Nick Cousins and Scott Laughton.

It was Laughton's 6th goal of the season and his fifth point in his last five games (2 G, 3 A).

•    Claude Giroux returned to lineup after missing the last three games with an upper-body injury, and didn't take long to make his presence known. He lit the lamp late in the first period, his 500th career point.

Claude Giroux is back pic.twitter.com/r0znNJv16a

Giroux's return couldn't have come at a better time, as the team's second-leading scorer, Jake Voracek, was injured against the Wild and missed Saturday's game with a lower-body injury.

•    Also helping the Flyers overcome the recent injuries to Giroux and Voracek has been timely scoring from some unlikely names. Sam Gagner found the back of the net just 40 seconds after his captain to give the Flyers a 3-1 lead, one they wouldn't surrender the rest of the game.

Gagner from Couturier and the official! pic.twitter.com/2DtLiSLHbz

For Gagner, who was acquired from the Coyotes in the offseason, it was his third goal in his last four games.

•    Defenseman Mark Streit recorded an assist on all three of his team's first-period goals, picking up his 400th career point in the process. It was also apparently the first time in his career that the 38-year-old defenseman recorded three points in a single period. Like Gagner, his recent hot streak not only helps overcome the absence of the team's most prolific offensive players, but also helps GM Ron Hextall in negotiations ahead of Monday's trade deadline.

•    The Flyers' fourth and final goal came late in the third period and was credited to Pierre-Eduoard Bellemare. That was his second goal in as many games after a scoring drought that lasted nearly two and a half months.

There was a party in the crease and Pierre-Edouard Bellemare brought the buffalo chicken dip pic.twitter.com/9Uual9fFjx

•    Brayden Schenn also stepped up big for the Flyers when Giroux went down, and that continued on Saturday with Voracek out. With two assists against the Coyotes, Schenn now has 10 points (4 G, 6 A) in his last nine games.

•    Coach Dave Hakstol continued to ride the hot hand of Michal Neuvirth in net, and boy did it pay off. He was spectacular again on Saturday and it will be interesting to see if he starts again on Monday night, or if goes back to starter Steve Mason.

•    There were plenty of penalties on Saturday, with each team drawing four power plays. And the Flyers won the special teams battle against the Coyotes -- they finished 1-for-4 with the man advantage while their penalty kill unit held Arizona scoreless in their four chances. The goal by the Flyers extended their streak of power play goals at home to 10 games.

The Flyers won't play again until Monday night, after the trade deadline has passed. That game against the Flames will be the third in this crucial six-game homestand. It'll also be Hall of Fame night for former Flyer Jim Watson.

Here's a look at their homestand so far, as well as the games they have remaining.

With the win on Saturday, the Flyers climbed ahead of the Devils and Hurricanes in the standings and, at least temporarily, moved to within one point of the Penguins for the final Eastern Conference wild card spot.