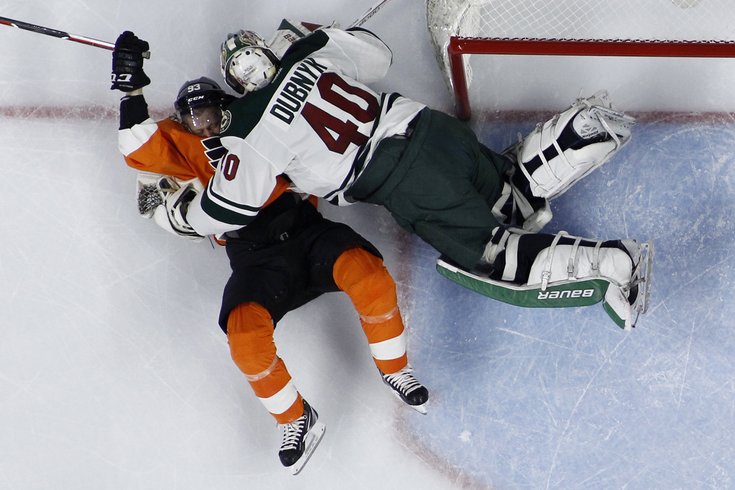 The Philadelphia Flyers got two hard-earned points Thursday night against the Wild -- thanks in large part to Michal Neuvirth's late-game heroics -- but in the process they lost one of their top scorers, winger Jake Voracek, to injury.

The Flyers were already without captain and leading scorer Claude Giroux, but they found a way to sneak out a 3-2 win over Minnesota. A day later, general manager Ron Hextall announced that Voracek will not play in Saturday's game against the Coyotes due to a lower-body injury. Giroux, injured against the Canadiens a week ago, remains questionable to return to the Flyers lineup this weekend.

As for Voracek, his 286-game iron man streak -- he last missed a game in March of 2012 -- will come to an end, possibly because of this collision with Wild goalie Devan Dubnyk in the second period. Both players did remain in the game.

Suter pushes Voracek into Dubnyk. Gonna go ahead and just say that was pretty ill-advised by him pic.twitter.com/RUpFsotFlK

With an assist against the Wild, Voracek is up to 48 points (10 goals, 38 assists) on the season -- and 43 in his last 44 games following a slow start. That's good for second on the team behind Giroux (49 points) and his 38 assists put him in a tie for ninth in the NHL.

Giroux, who skated for the first time in a week on Friday, remains "day-to-day" according to Hextall, who added that there's "a chance he plays" against Arizona. That decision will have to wait until Saturday.

The Flyers have five games remaining on this crucial six-game homestand, so it's a good sign that their captain seems close to returning, especially with the loss of Voracek, who will be re-evaluated Monday. Currently, the Flyers (65 points) are three points behind the Penguins for the final Eastern Conference wild card spot with 22 games remaining. They'll also have to pass the Devils (67 points) and Hurricanes (66 points) in order to make that happen.