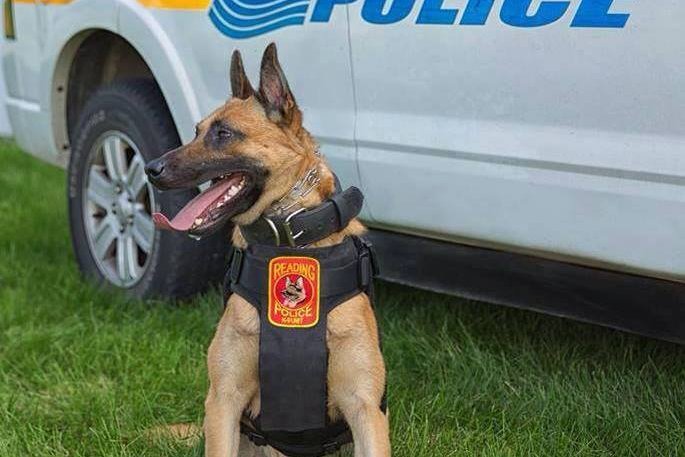 Cody is on the mend and expected to return to service in Reading after becoming the first working dog taken via medevac to Penn Vet's Ryan Hospital in University City.

Cody, the Reading police K-9 that suffered a life-threatening injury on Sept. 4 while on duty, is on the mend thanks to good luck – and good planning.

The planning that saved the Belgian Malinois, who suffered internal abdominal bleeding after falling perhaps 20 feet, began six years ago.

A New Castle County, Del., police dog – another Malinois, a herding breed that looks like a rangier version of the German shepherd – nearly died after being shot twice in 2009.

Police had to transport the injured animal by vehicle from Wilmington to the University of Pennsylvania’s animal hospital at 39th and Spruce streets, also known as Penn Vet’s Ryan Hospital.

Dr. Cindy Otto, a veterinarian who is now the executive director of Penn’s Working Dog Center, was working as a clinician when that dog, Diablo, endured the ride to University City.

There had to be a better way, thought Otto, who who has spent 24 years at Penn Vet and works with search-and-rescue dogs, as well as K-9s.

After all, medevac helicopters routinely transport people for emergency trauma care, saving precious time in the first hours after an injury.

Why not use medevacs to move the expensive (Cody cost about $8,000, plus additional costs for training and care) and highly trained dogs – who are relied on to perform dangerous public safety missions – more speedily? 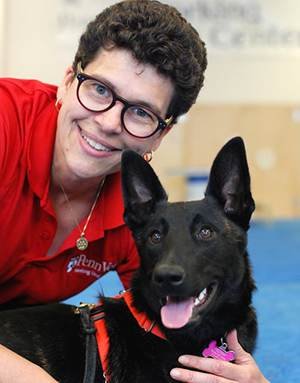 But there were a whole number of different layers” that needed to be worked out first, says Otto, pictured left with another working dog.


Such as, putting a protocol in place for calling for a flight, a convenient place to land a chopper, a secure means of land transport to Penn Vet and 24/7 staffing – the one component Penn Vet already had in place.

Because bonding is a part of working dog training, the medical helicopters would need to accommodate a handler as well as a canine.

The planning and coordination to bring the components together took two years.

The plan united the Hospital of the University of Pennsylvania at 34th and Spruce, which is equipped with a helipad, the PennSTAR medical copter fleet, Penn’s police department, which could be on call with a van equipped with a hammock-like stretcher to better accommodate large dogs, and a receiving plan in place five blocks away at Penn Vet.

Then the wait began.

Meanwhile, Ryan was certified in 2013 as a pet trauma center – one of just nine in the country – meaning it was well staffed with veterinarians and nurses around the clock, and that a surgeon, radiologist or other specialist could be called in at any time. The center handled nearly 9,000 cases in the last 12 months.

Also, what may have been the first-ever emergency flight for a police dog happened in spring 2013, when a helicopter was called to transport a Harrisburg K-9 that had been shot.

In that case, there were no plans or protocol in place, putting a dispatcher for Penn State Milton S. Hershey Medical Center in the tough position of having to make the snap call to press a hospital medical copter into service in order to save the dog. The case underscored the wisdom of having a program in place before an emergency happened.

During the intervening time, Penn’s Working Dog Center did outreach to prepare for handling a trauma, such as offering a first aid course for working dogs and their handlers – such as Cody and his partner, Officer John Hutchinson. 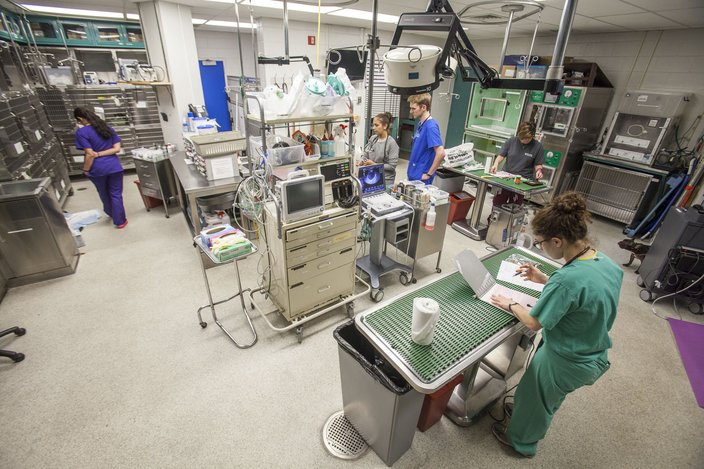 The police dogs and Hutchinson attended the emergency medicine course in January, preparing the officer for what happened the evening of Sept. 4, according to Otto, who taught the course.

While searching for a possible intruder, Cody fell off a suspended walkway above a school utility room at about 8:15 p.m.

On the way down, the dog clipped a steam pipe before hitting the floor hard. The dog had a significant gash and had hit its head.

What wasn’t apparent at first was that the fall had caused internal bleeding into Cody’s abdomen, either from the liver or gall bladder, according to Otto.

But the first-aid training Hutchinson got, along with the emergency flight, may have saved the animal’s life or at least made his recovery much swifter.

Cody and the officer at first went to a local vet near Reading, but when the dog became lethargic – a classic sign of internal bleeding – the decision was made to fly to Penn.

Otto said knowing when to intervene and operate, and when to watch and allow internal bleeding to heal “without digging around” is the sort of judgment call that Penn’s vets have deep experience in making.

At Penn, allowing Cody to heal meant a red blood cell transfusion to make up for what was lost and watchful waiting while keeping the dog calm, but not sedated, which could have caused additional issues, according to Otto.

Dr. Cassie Ostroski, a third-year veterinary resident who is specializing in critical care, said the flight protocol went "like clockwork."

The chopper ride was about 30 minutes, the ground transport less than 10, and the staff at Penn Vet were kept notified of the dog's condition and transport. The dog went to Ryan's ICU around 11 p.m.

The dog was anxious and clearly had blood loss, but neurological tests showed the head trauma was not a major concern. Had the internal bleeding been in the lungs or brain, there would have been little to do, but the abdominal bleeding suggested that stabilizing the dog was the best course.

Red blood cells were transfused and the dog given pain medication. Within an hour, Cody "seemed more normal and comfortable. He improved significantly," said Ostroski.

By noon Saturday, when Otto first saw Cody, the dog was looking fairly good. The gash, which had been cleaned out, was stitched up after the dog had stabilized.

By Sunday, the dog was released. Cody was back again Tuesday – via vehicle – for a checkup, which looked good.

Thinking back, Otto can laugh about an irony that was part of the first aid training seminar attended by Cody and his handler.

The very first training scenario she used in that class was a dog falling one story and being injured.

She’d talked about lethargy, a change in gum color from red to pale, an increased heart rate and heavier breathing – symptoms Cody's handler had picked up on.

“He was very astute about the symptoms,” she said of Hutchinson.