'Grounded Autonomy' to be debut show for SkyDance Philly 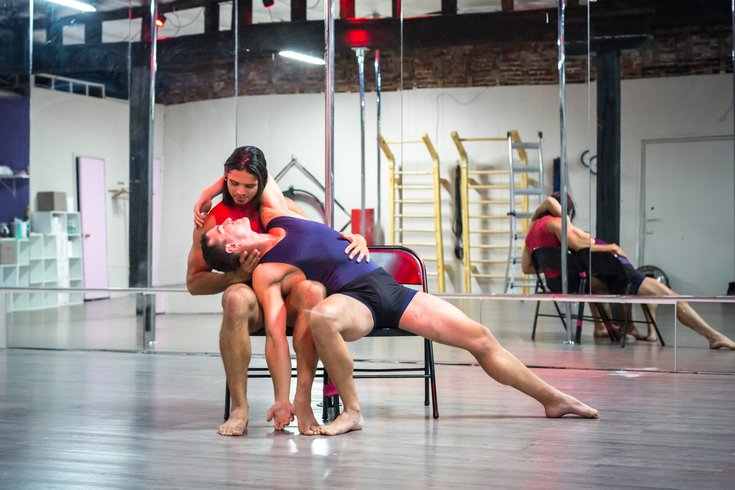 Garrett Olthuis was mid-air at a Flaunt Fitness pole-dancing class when his eye caught hold of Sean Green — his ex.

"He walked in pale white," 29-year-old Olthuis told PhillyVoice. "Like he saw a ghost."

Class that day proceeded in a way that was uncomfortable (more so than it already is with your legs flying through the air), but that encounter, significantly, got the ball rolling for a reunion between these two dancers and former lovers, who'd endured an emotional breakup years prior. By January, Olthuis had arranged a coffee meeting with 26-year-old Green to talk about how they fit in each others' lives as exes; by February, they were planning an aerial dance show together for the 2016 Philadelphia Fringe Festival. Their love of dance, it seemed, was their great uniter.

Tossing around ideas for the show — ones that involved everything from a bathtub to a spinning bed — they ultimately landed on a subject that required a little less explaining between them: their relationship.

"When it came down to it, we decided the most important thing to us right now was the two of us right now," Olthuis explained. "It’s kind of selfish and cathartic, but if we didn’t do a show to heal, we can’t move on to do the fun shows about the crazy things. Because it’s almost like we’d be right back where we were, being kids and covering up the things we felt and the things we wanted to say to one another.

"We’d just be covering them up with rhinestones and glitter."

Together, along with two other Flaunt Fitness dancers, they'll perform "Grounded Autonomy" at The Glass Factory in Brewerytown from Sept. 9 to 11 as part of this year's Fringe Festival. The 120-minute, nine-part show will tell the story of their relationship, beginning with more straightforward, on-the-ground choreography that sets up their love story, before swinging into more tumultuous elements of their romance while maneuvering on poles and aerial hoops. (They're promising an impactful story, but also lots of "cool tricks.")

Green and Olthuis perform a portion of their duet in the show's second act.

The set will be minimalistic: floor-to-ceiling poles, ropes, lyras, exposed beams, a concrete floor, a stage with some simple props and monochromatic costumes to start, with rhinestone outfits introduced later in the show. On the whole, the performance takes inspiration from Brian Sanders' JUNK dance troupe and Fringe regular Gunnar Montana.

This will be the first time Olthuis — a University of the Arts alum and former classical dancer — has tackled aerials. And for Green, a nationally competing pole dancer, it's his first foray into classical dancing. It's also the first time either of them will perform as part of the circus-arts SkyDance Philly collective.

The result has been a learning experience that, they both explained, has brought them closer together, as they've uncovered new ways to release their emotions.

"It’s been a good time to get to express yourself in a way that isn't strictly your words so that you can put things out there and be like, ‘This is a vulnerable place for me, and not only am I saying it but physically being vulnerable with you right now. So, be careful with it.' Because I think that’s a lesson I didn’t learn until later in life: to be careful with someone else’s emotions and heart and vulnerability," Olthuis said. "It's sort of a double entendre for everything we do because not only are we being careful with the emotions of the parts of the project that we’ve created separately, and also together, but we’re putting our physical selves into it and trusting we’ll be there.”

Green performs a portion of his solo in the show's second act.

Green, meanwhile, hopes the show will not only remind audiences of what it feels like to find love and, in the process, yourself, but also prove a personal point.

"We’ve both had the problem of our friends saying ‘This is a bad idea. It’s not healthy.’ I just hope to prove them wrong," Green told PhillyVoice. "I think some of them have seen that since we’ve been friends these past few months, that we're both in a different place. But it’s very important to to me to have the acceptance of my friends, of my best friend who I’m seeing every single day."

Following the string of performances, they'll start brainstorming a second show — likely one that's a little more fantastical. But for now, they're just happy to have discovered a way they can fit in each others' lives as exes.

"For as long as I can still have my leg behind my head," Olthuis quipped.