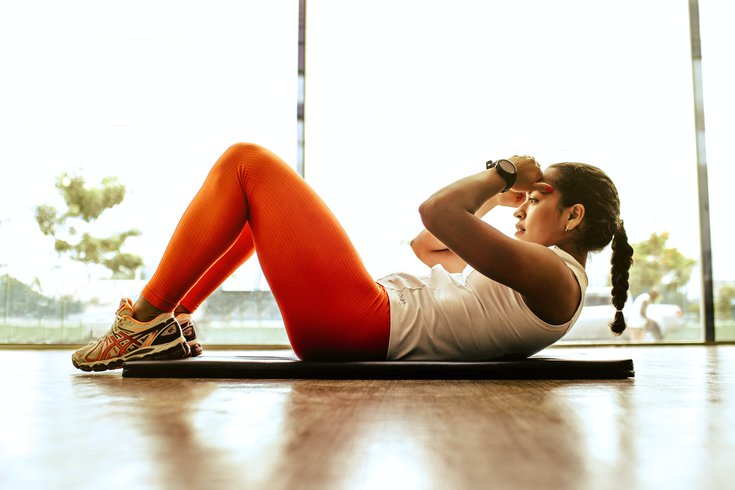 One of the keys to making an exercise routine a habit is setting attainable goals. They recommend starting with small steps, like doing 10 crunches while watching TV and then gradually increasing the amount each day.

We all know that exercise is important for our health, but recognizing that and incorporating it into our jammed-packed lives are two separate things. How many of us have started a new year with a resolution to exercise more, only to have thrown in the towel before February?

Establishing an exercise routine that you won't give up on in a few weeks is possible with the right motivation and planning, behavioral experts say.

Why is exercise so important?

Exercise not only helps control body weight, but it helps prevent serious health conditions such as stroke, metabolic syndrome, high blood pressure, type 2 diabetes and arthritis, according to the Mayo Clinic. It also reduces anxiety and depression and boosts energy.

The American College of Sports Medicine and the U.S. Centers for Disease Control and Prevention recommend that adults complete at least 30 minutes of moderate, aerobic physical activity five days per week or 20 minutes of a vigorous, aerobic workout three days a week. Examples of aerobic exercise include swimming, cycling and walking.

They also recommend that adults perform activities that build strength and endurance – think squats, pushups and pull-ups – at least two days per week.

Building a habit that sticks

According to behavioral experts, the right planning can make a big difference in whether a new habit sticks.

Scientists have shown that creating a detailed plan that includes specific workout times and locations makes people less likely to forget to exercise. It's also helpful to leave cues, like setting out your workout clothes the night before so you see them when you wake up.

Here are five other simple tips that can help you successfully build a new exercise habit. They are culled from Scientific American, NBC News, CNN and NPR.

Repetition is the key to starting any new habit. Katy Milkman, a professor at the Wharton School of Business, told NPR that people should give any new exercise routine at least one month before giving up.

There is nothing wrong with an ambitious goal, but it needs to be attainable, personal trainer Stephanie Mansour told NBC News. Otherwise, people just get discouraged and give up. Recognize that sometimes life will get in the way and missing a few workouts doesn't have to completely derail your fitness goals.

For some people, just getting started can be overwhelming. An hour-long fitness class or run is just not doable for everyone right out of the gate. Instead, Mansour recommends committing to a 10-minute walk around the block or 10 sit-ups while watching TV. Then, build on that each day. Breaking goals into smaller steps can make them feel more manageable.

Many people have hectic lives. If there is a day when it's not feasible to make a scheduled fitness class or complete a normal hour-long run, don't curl up on the couch in defeat. Instead, incorporate some small amount of exercise into that day so you are still doing something good for your health. It could be a brisk walk at lunch or a few sit-ups. It doesn't matter as long as you are moving.

4. Exercise with a friend

Social support can be a big motivator when it comes to establishing healthy habits like exercise and eating right. When people take the journey with a friend, they not only have somebody to hold them accountable, but they also have a built-in cheering section.

Studies have shown that people are strongly influenced by the behaviors of the people around them, Milkman wrote in a article for CNN. The best way for people who want to start running regularly is to join a running club. Members will be able to share what the habits that work well for them and provide motivation when people feel like giving up.

Switching up the types of exercise prevents workouts from feeling stale. Don't be afraid to try out that new fitness class everyone is talking about.

"Temptation bundling," a term coined by Milkman, also can increase motivation. That means tying exercise to something you like doing. For instance, commit to only watching a guilty pleasure TV show while working out on the treadmill. Or you allow yourself a small treat after working out.