It's only Week 5 of the 2018 NFL season, and the Philadelphia Eagles have already lost as many games as they did all of last year. They now sit at 2-3 after two consecutive sloppy losses, and look like a shell of the team that won the Super Bowl.

1) The 'No Celebrating' Award: The Eagles offense

In 2018, the Eagles have yet to score 24 points in a single game, and have had to rely on the defense to bail them out in the two wins that they do have.

2) The 'Charity' Award: The Eagles' fumble-itis

Heading into Week 5, the Eagles led the NFL with five fumbles lost. Tack another two fumbles on the board after their loss to the Vikings, bringing their total to seven. With nine minutes left in the third quarter and a 14-point deficit, Jay Ajayi fumbled inside the Vikings' five yard line.

The Eagles FINALLY run the ball and Jay Ajayi does this ... pic.twitter.com/ttJW1ANpc9

3) The 'Under the Rainbow' Award: Jalen Mills

And sure enough, on the ensuing Vikings drive, Minnesota did what seemingly every team has done all season long. They attacked Jalen Mills deep, with Adam Thielen toasting Mills on a double move for 68 yards. 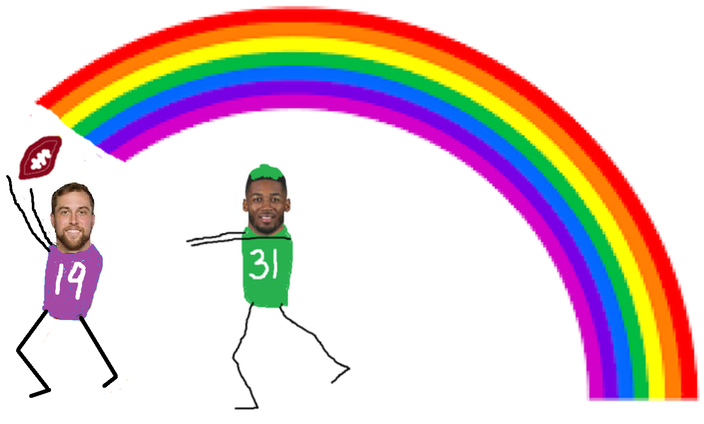 If you're an offensive coordinator and you're not testing Mills on a deep ball at least 3-5 times per game, you're an idiot.

Through the first five games of the season, the Eagles have seen a number of guys who had career years in 2017 come back down to Earth in 2018. There's probably no better example of that than Lane Johnson, who was the best offensive tackle in the NFL last season when he faced a murderers' row of stud pass rusher every week, and shut them down. This year, he's been victimized by far less talented players.

Against the Vikings, some guy named Stephen Weatherly beat him inside for a strip sack that was returned for a touchdown by Linval Joseph.

Linval Joseph has the football and he will NOT be stopped!

BIG MAN TOUCHDOWN for the @vikings!

Obviously, those were two enormous plays in tight games.

5) The 'Don't Ever Touch the Quarterback' Award: Walt Coleman

Michael Bennett got called for a personal foul for THIS!!!!!!! A TACKLE!!!!!!!! NFL this is abominable pic.twitter.com/EdzLamYiZK

Uh, no. He hit him in the ass, slid down to his ankles, and eased him down like a nurse helping an old man into a bath.

As a result of that absolutely dreadful call, the Vikings were rewarded with a 1st down from the Eagles' 11, and they scored two plays later.

While the Bennett penalty was absolute trash, the Eagles did commit plenty of other legitimate penalties in this game, as they seemingly do every week.

They had three false starts and two illegal formations. Those are unforced errors that are unacceptable for an offense that doesn't have a single starter who isn't at least in his third year in the pros.

Facing 4th and 20 from the Vikings' 40 yard line with a little more than nine minutes to go and a 6-point deficit, the Eagles opted to punt rather than try a 57-yard field goal.

In his career with the Eagles, Jake Elliott is 5 of 7 from beyond 50 yards. While most of those were in the 50-to-53 range, he typically clears those distances with plenty of room to spare. Assuming he's perfectly healthy, a 57-yard field goal is well within Elliott's range.

A made field goal there would have put the Eagles down three, and further advanced their positive momentum. Instead, Pederson opted to punt, and the Vikings proceeded to march 55 yards while chewing up 6:24 of clock, and kicking a field goal of their own to go up by 9 and all but seal the win.

Punting wasn't a horrendous decision, but certainly in hindsight, it ended up being the wrong one.

In the first quarter, Pederson called flip-90 to Josh Adams for some reason on 3rd and 1. In an offense with Jay Ajayi, Carson Wentz, Alshon Jeffery, Zach Ertz, and Nelson Agholor, Pederson called the number of an undrafted rookie with six career carries.

To note, a season ago, Wentz was perfect on quarterback sneaks. The Eagles have not attempted one yet this season.

Smallwood has a nice day running the football, but his drop inside the red zone cost the Eagles a first down, and maybe four points.

I hear Le'Veon Bell is available? Has anyone mentioned that?

10) The 'Forget the 1 Seed' Award: The Eagles' playoff aspirations

When Howie Roseman re-emerged as the Eagles' executive vice president of football operations -- or more easily stated, the general manager --  he said that he wanted to build a team that was earning first round byes in the playoffs, not 10-6 teams that make the playoffs but have extreme uphill battles to make it to the Super Bowl.

And, well, that thinking, while obvious, is dead on. Playoff history in the NFL shows that it is a hell of a lot easier to make it to the Super Bowl when you have home field advantage throughout the playoffs, or at least a first round bye. That is especially true of the last five years.

During the above five-year span, the average number of wins necessary to earn one of the 10 home field advantages throughout the playoffs was exactly 13. In order to earn the No. 2 seed, three teams had 13 wins, six teams had 12 wins, and just one was able to get the No. 2 seed with 11 wins.

In other words, the margin for error for teams to put themselves in a position to earn at least a first round bye, or even better, home field advantage, is small.

Certainly, there are examples of teams that have made it to the Super Bowl despite longer odds heading into the playoffs. Six teams, for example, have won the Super Bowl as wildcard teams, but those success stories are few and far between. At 2-3, the Eagles' margin for error to eventually end up with a first round bye is nearly gone.

At this point, forget about first round byes or home field advantage or anything like that. The Eagles need to win a game.