Handing out 10 awards from the Eagles-Vikings NFC Championship Game

I'll say it one more time. The Philadelphia Eagles are going to the Super Bowl.

Where in the hell did that performance come from? After looking absolutely dreadful in the final two regular-season games against the Oakland Raiders and Dallas Cowboys, Nick Foles came out in the NFC Championship Game and absolutely lit up "the No. 1 defense in the NFL."

Against the Vikings, Foles looked damn good, dropping dimes to Nelson Agholor, Alshon Jeffery, and Torrey Smith. He was outstanding on the biggest stage of his career, both in the stat sheet and on the eye test.

2) The 'Coach of the Year' Award: Doug Pederson

It feels laughable now that Los Angeles Rams head coach Sean McVay won Coach of the Year. Objectively, if the Coach of the Year also considered playoff performance, Doug Pederson would be the unanimous choice. It would be no contest.

After losing Carson Wentz, Jason Peters, and Darren Sproles, Pederson's offense hung 31 points (the D chipped in 7) on the Vikings and could have piled on more if they didn't go into "burn the clock" mode. In a season full of outstanding game plans, Pederson called perhaps his best game of the season, mixing in the run and the pass, while keeping Minnesota's defense off balance all night.

Pederson has very quickly become one of the best coaches in the NFL, which seems unreal, but that is the reality.

3) The 'Coordinator of the Year' Award: Jim Schwartz

Remember when the Vikings drove down on their opening drive, scored, and made it look incredibly easy? Welp, nothing went right for the Vikings' offense after that. Jim Schwartz's defense proved to be the best defense on the field Sunday night... by far.

The Eagles were fourth in yards allowed, but made way more big plays, including six defensive touchdowns. Against the Vikings, the Eagles produced three turnovers, while the Vikings produced none. Good defenses force punts. Great defenses produce points, and the Eagles did the latter all season long.

4) The 'Stock Up' Award: Patrick Robinson

Way back in August, after 10 training camp practices, I asked 30 Eagles media people, all of whom attended every practice (or close enough to it) to identify one player whose stock was up and one whose stock was down.

Robinson got 14 of the 30 "stock down" votes after a horrendous start to training camp and was thought of at the time as being in jeopardy of not making the team. Robinson slowly turned it around, playing better in the preseason games, and then becoming one of the best slot corners in the NFL during the regular season.

When the Eagles badly needed a play early in the game against the Vikings, Robinson delivered in a big way.

.@PatRobinson25 PICKS off Case Keenum.
Sets up his blocking.
And takes it to the HOUSE.

I think it's safe to say Robinson's stock is up.

5) The 'Thank You' Award: Sam Bradford

The Eagles traded Sleevie Wonder to the Vikings for a first-round pick, which was then used on DE Derek Barnett. The rookie made a huge play in the second quarter, when he strip-sacked Case Keenum, with the fumble being recovered by Chris Long.

The Eagles scored on the ensuing drive. Mike Zimmer must have been looking over at Sleeves in disgust.

In the six games after he signed a four-year contract extension worth $52 million, Alshon Jeffery averaged 38.5 yards per game and had just two TD catches.

Against the Vikings, Jeffery had 5 catches for 85 yards and 2 TDs. Like Foles, Jeffery saved perhaps his best game for the biggest moment. 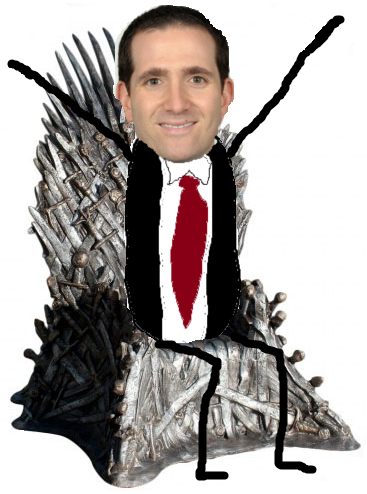 7) The 'Executive of the Year' Award: Howie Roseman

Hmmm... We already mentioned Alshon Jeffery, Derek Barnett, Chris Long, and Patrick Robinson. What do they have in common? They were all Roseman acquisitions this past offseason, along with other key contributors like LeGarrette Blount, Corey Graham, Jay Ajayi, and the list goes on.

Not to mention, you know, trading up twice to draft Carson Wentz. When they fired Chip Kelly at the end of the 2015 season, the Eagles were a mess. When Roseman re-assumed his GM role, he inherited a bad roster that was eating up far too much cap space.

In two short years, the Eagles arguably have the best roster from top to bottom in the NFL, and Roseman deserves a whole lot of credit for that.

The biggest strength on the Eagles' roster is their defensive line, and they outright dominated the Vikings up front. The Eagles only registered one sack, but they pressured Case Keenum into bad throws all game long. Chris Long's pressure led to Robinson's pick-six, and Barnett's strip sack likely saved either three or seven points and led to seven points off the turnover for the Eagles going the other way.

Long and Barnett would start on most teams. On the Eagles, they are incredibly valuable reserves behind an excellent starting front four in Brandon Graham, Fletcher Cox, Tim Jernigan, and Vinny Curry.

The way the Giants beat the Patriots in their two Super Bowl wins was with their defensive lines. The Eagles will have to do the same in two weeks.

9) The 'Underdog' Award: The Eagles

The Rocky comparisons are so cliche, and I'm 99 percent certain that angle will be played out to death over the next two weeks, but they're apt. Allow me to just make note of that here, once, and then never again.

10) The 'Conference Champions': The Eagles (duh)

But not too long. One to go.