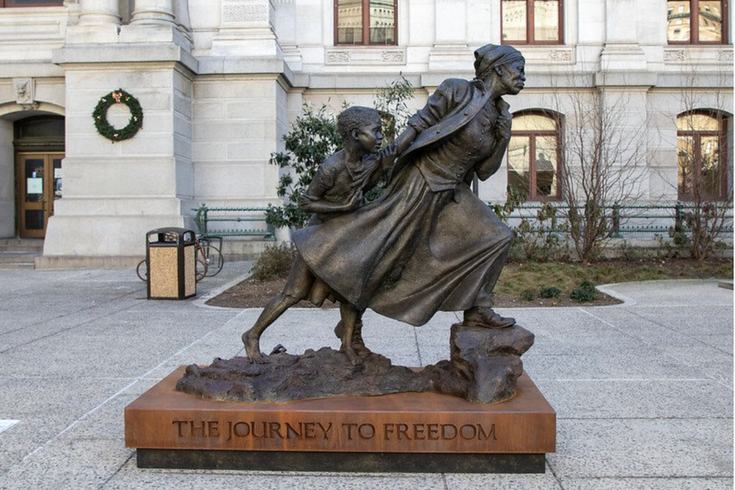 Philadelphia Mayor Jim Kenny and Creative Philadelphia announced an open call for an artist to create a new permanent Harriet Tubman statue. The open call opens the door for diverse local and minority artists to create the monument.

The city of Philadelphia is calling all artists forward for a chance to create a new Harriet Tubman statue after receiving backlash from the community over the project's initial commission.

The Office of Arts, Culture and the Creative Economy will hold an open call for proposals later this year and will announce the chosen artist in the fall. The statue will sit in front of City Hall on the North Apron and is anticipated to be unveiled in 2024.

Plans for a permanent statue were announced after a traveling piece by North Carolina artist Wesley Wofford was celebrated by residents. "Harriet Tubman — The Journey to Freedom" sat outside City Hall from Jan. 12 through March 31 as part of a celebration for Tubman's 200th birthday.

The city commissioned Wofford to create the $500,000 statue, which was set to be larger than the original. At the time of the announcement, Mayor Jim Kenney said the sculpture would represent activism, heroism, equality and resilience. However, the artist choice raised concerns in the community.

During a virtual public meeting in June with OACCE, local artists voiced their displeasure with the process of choosing Wofford – a white artist – to create a statue of a historical Black American figure.

Leslie Garrett spoke during the meeting and said she opposed a non-Black artist creating the sculpture, KYW reported.

"I'm not in support of this artist doing the work, nothing personal against him," she said. "It should have been brought to the community, and we should have been made aware and been able to select an African American sculpture artist."

An article published in The Art Newspaper called the process of choosing Wofford unfair and not equitable, because it wasn't an open competition.

Marguerite Anglin, director of public art at OACCE, said the city tried to purchase the temporary statue, but was unable to do so and felt it would have been inappropriate to hire anyone else to recreate Wofford's work, Hyperallergic reported. She added the city would issue an open call ordinarily, but the situation was different because it was not starting from scratch.

The final tipping point was an August letter from seven City Council members calling for the city to prioritize local artists for the project. Councilmember Isaiah Thomas said in the letter that he was disappointed his vision of putting government dollars in the hands of local artists wasn't shared, according to the Inquirer.

The new direction was announced 12 days after the letter was sent to the OACCE. The open call will prioritize Philadelphia artists and give equal opportunity to women and minorities.

“Our Administration and OACCE have always been committed to public art that celebrates and showcases the stories of African American contributions to this country’s history while also developing or supporting various opportunities to increase the diversity of artists,” said Kenney. “In that spirit, it is important that we listen to the voices of those in the community and incorporate that feedback into our vision of commissioning this permanent statue."

OACCE Cultural Director Kelly Lee said that in the future, the office would make sure public artworks that are funded with public funds garner public support.

Philadelphia played an important role in Tubman's story. After escaping slavery, she found her freedom in the city and famously spoke from the pulpit at Mother Bethel African Methodist Episcopal Church.

To learn more about the open call, visit Creative Philly's website for updates.