Permanent Harriet Tubman sculpture to be installed outside City Hall 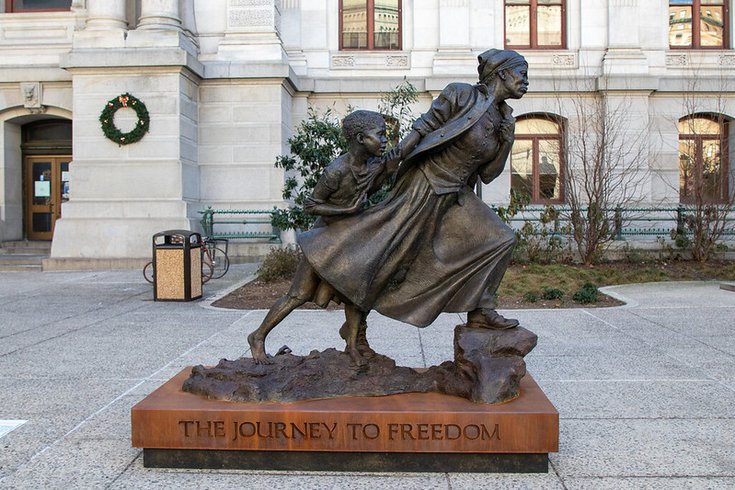 Wesley Wofford's 'Harriet Tubman – The Journey to Freedom' sculpture has stood outside of City Hall in Philadelphia since January.

Harriet Tubman will soon become an enduring fixture outside of City Hall in Philadelphia.

The city announced on Thursday that it has commissioned a sculpture to honor the abolitionist's legacy in response to the temporary statue's popularity among residents, according to the city's Office of Arts, Culture and the Creative Economy.

The new monument will be created by artist Wesley Wofford, who designed the "Harriet Tubman – The Journey to Freedom" sculpture that has stood outside of City Hall's North Apron. It will also be larger than its nine-foot-tall predecessor, city officials said.

"This sculpture will represent the values of activism, heroism, equality, resilience and more that we want inspiring all who visit City Hall," Mayor Jim Kenney said.

In conjunction, U.S. Rep. Brendan Boyle said that he will introduce legislation in the House of Representatives to make March 10 a federal holiday honoring Tubman. The grassroots effort was spearheaded by Harriet's Bookshop owner Jeannine Cook, Boyle said.

Wofford Sculpture Studio made the traveling statue as a memorial to contributions of strong women throughout history. The monument depicts Tubman freeing hundreds of enslaved people through the Underground Railroad and features the Pennsylvania state line and Philadelphia in the geographical shape of its base.

The exhibition arrived in Philadelphia in January after previous stops at the new Harriet Tubman Museum in Cape May; Haverstraw, New York; Halifax, North Carolina and Sylva, North Carolina.

The sculpture has stood outside of City Hall as part of the city's celebration of Tubman's 200th birthday, Black History Month in February and Women's History Month in March. Philly has held a series of virtual and in-person events over the last two months to celebrate Tubman's life.

The statue will remain on display until March 31, when it will then move on to White Plains, New York.

Philadelphia has been a fitting location for Wofford's statue to take up temporary residence. Tubman found her freedom in Philly and famously spoke from the pulpit at Mother Bethel African Methodist Episcopal Church during her time in the city.

Additionally, Philadelphia's Seventh Ward was at one time home to the nation's largest neighborhood of free African Americans.

A number of houses and farms across the Philly region served as safe places for African American families to shelter while traveling from enslavement in the south to freedom in the north.

The forthcoming Tubman sculpture would join the Harriet Tubman Memorial Statue that stands along the Delaware River in Bristol, Bucks County. The monument depicts her pointing in the direction of the North Star.

But plans are in the works to construct a monument honoring Philly native and opera singer Marian Anderson. The statue would be the first of its kind to be named after a Black woman in Philadelphia, the Inquirer reported.

Efforts to put Tubman on the $20 bill have slowed in recent years after the Treasury Department said in 2016 that the political activist would eventually replace former President Andrew Jackson. While the Biden administration has pledged to speed up the process, Tubman may not officially land on the $20 bill before 2030.