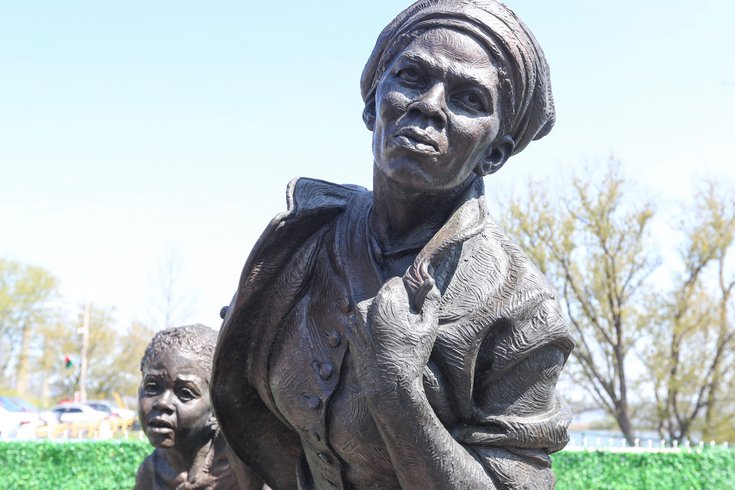 'Harriet Tubman — The Journey to Freedom' will stand outside City Hall in Philadelphia through the end of March.

Philadelphia is set to receive a temporary sculpture of Harriet Tubman that will be on display as part of the city's commemoration of the abolitionist's 200th birthday this year.

"Harriet Tubman — The Journey to Freedom," a statue depicting the political activist's efforts to free hundreds of enslaved African Americans through the Underground Railroad, will be unveiled Tuesday outside of City Hall.

The citywide recognition of Tubman's birthday is being organized by Philadelphia's Office of Arts, Culture and the Creative Economy. More than 20 in-person and virtual events are being planned, including special exhibits, screenings of the movie "Harriet" and panel discussions. A full schedule of events will be released next week.

The nine-foot-tall statue was created by Wofford Sculpture Studio as a memorial of the resilience and contributions of strong women throughout history. The traveling monument was previously on display this past summer at the new Harriet Tubman Museum in Cape May.

Philadelphia is a fitting location for the statue to take up residence. Tubman found her freedom in Philadelphia and famously spoke from the pulpit at Mother Bethel African Methodist Episcopal Church during her time in the city.

Additionally, Philadelphia's Seventh Ward was at one time home to the nation's largest neighborhood of free African Americans.

A number of houses and farms across the region served as safe places for African American families to shelter as they traveled from enslavement in the south to freedom in the north.

There are a number of local historic sites that people can visit today and learn more about the role that the region played in the Underground Railroad. Among these places is the Harriet Tubman Memorial Statue that stands along the Delaware River in Bristol, Bucks County. The statue depicts her pointing in the direction of the North Star.

However, efforts to put Tubman on the $20 bill have slowed in recent years after the Treasury Department said in 2016 that the abolitionist would eventually replace former President Andrew Jackson.

While the Biden administration has pledged to speed up the process, Tubman may not officially land on the $20 bill before 2030.