Why hasn't Philadelphia put more women on a pedestal?

The city has hundreds and hundreds of public statues, including 10 of Ben Franklin. Only three depict historical women. 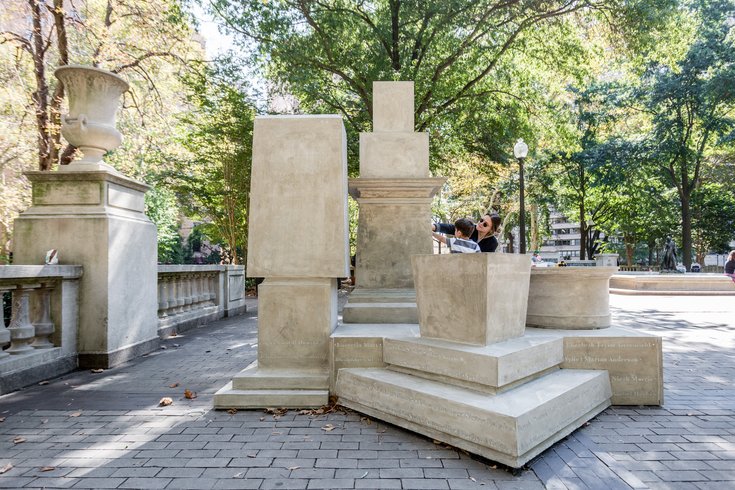 The Monument Lab installation, "If They Should Ask," by artist Sharon Hayes draws attention to the lack of historical women depicted among Philadelphia's statues. The empty pedestals are on temporary display in Rittenhouse Square.

The nine pedestals sitting along a pathway in Rittenhouse Square are different shapes and sizes, but none of them support a statue.

Instead, the collection of sculpture serves to highlight those statues that are missing from Philadelphia – depictions of historical women.

In a city that boasts hundreds and hundreds of statues, just three are devoted to historical women. Two of them died before Philadelphia was even founded.

A glistening Joan of Arc – hoisting a flag while riding atop a horse – faces the Philadelphia Museum of Art. Another martyr, Mary Dyer, sits just inside the entrance to the Friends Center in Center City. And a singing Kate Smith greets sports fans as they enter Xfinity Live! at the stadium complex in South Philadelphia.

By contrast, there are at least 10 statues of Benjamin Franklin, five of William Penn and four of George Washington.

Yet, there is no shortage of Philadelphia women whose accomplishments make them a strong candidate to have their likeness cast in stone or bronze. 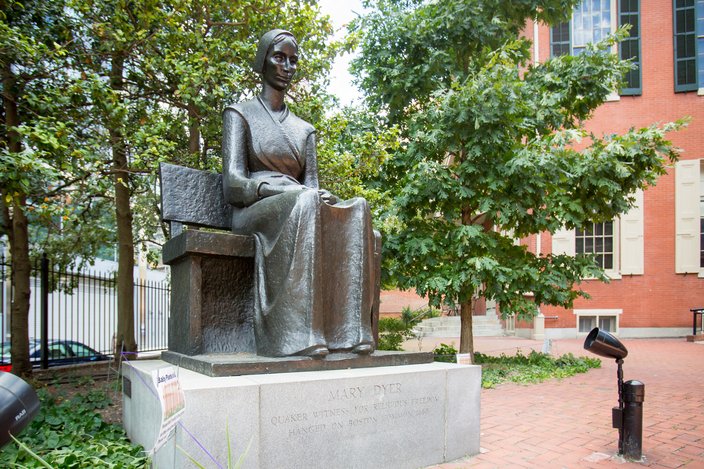 A statue of Mary Dyer sits outside the Race Street Friends Quaker Meetinghouse at 1515 Cherry St. in Center City Philadelphia.

With the assistance of a diverse team of women, Hayes drafted an abbreviated list of 79 women who deserve inclusion among Philly's statuary. The names, which date back to the mid-1600s, include suffragist Alice Paul, abolitionist Lucretia Mott and tennis star Ora Washington.

Hayes then carved their names onto the pedestals – recreated from existing monuments in the city – following an inscription that reads "On this site there could be a statue to."

The assemblage, titled "If They Should Ask," is designed to provoke two primary questions, Hayes said. First, what factors produced such a large disparity in the city's statuary? And how do we not only rectify that gap, but also the factors that caused it?

"For one reason or another, this country seriously lags behind celebrating the achievements of women in all fields." – Jody Pinto, professor, Pennsylvania Academy of the Fine Arts

"It's not a gap and it's not a problem that can just easily be rectified," said Hayes, a professor of fine arts at the University of Pennsylvania. "How do we do that? Even if we were to get the money to erect monuments to all 79 people that I'm proposing, would that rectify the gap?"

Hayes' installation is one of 20 being featured by Monument Lab, an art and history project produced by the city's Mural Arts program. The project asked its contributors to consider what an appropriate monument in Philadelphia looks like today.

"For me, I feel that it is a really important moment in time to be looking at monuments and to connect with the national conversation – about memory, about history, about who gets represented, who does the representing," Mural Arts Executive Director Jane Golden said.

The project came as considerable attention and debate is given to monuments across the United States. The fates of confederate statues have not only sparked heated debate, but resulted in a deadly protest in Charlottesville, Virginia.

In Philly, the future of a statue depicting former Mayor Frank Rizzo – both revered and despised for his policing tactics – rests in the hands of the Art Commission after calls for its removal intensified over the summer.

"We have not done a good job in representing our stories across the board," Golden said. "What we have is a snapshot. It's an incomplete history. What you're seeing now in Philadelphia and across the country is a reckoning of it. It's a grappling." 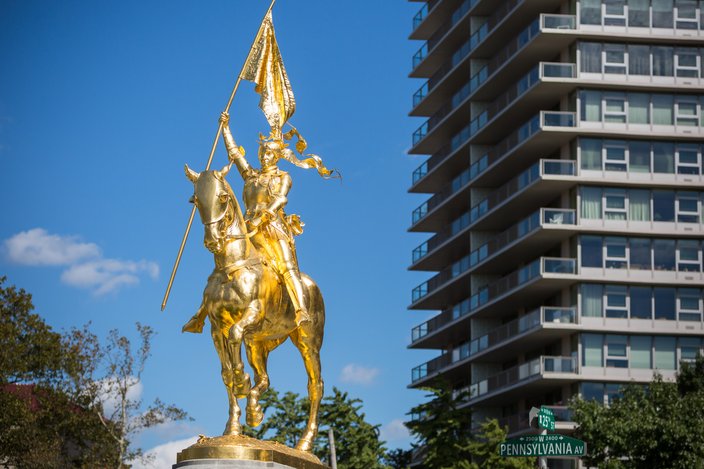 A gilded bronze statue of Joan of Arc faces the Philadelphia Museum of Art at 25th Street and Pennsylvania Avenue.

Philadelphia is not alone in this regard. The statuary of other American cities also lacks historical women.

Of the 5,575 historical sculptures listed in the Smithsonian American Art Museum's digital catalog, only 559 – about 10 percent – depict women, according to a CNN report earlier this year.

New York City only has five statues of women – and none of them are located in its famed Central Park. Chicago does not honor any women with a statue in its 580 parks. Boston has only six, including the exact same Mary Dyer statue as Philly.

In Washington, Statuary Hall includes nine women among its 100 statues. But the National Mall does not have any.

"It's not just an absence of political power held by women. It's actually something really willful that, I think, is in the DNA of (U.S.) monuments..." – Sharon Hayes, artist, "If They Should Ask"

"For one reason or another, this country seriously lags behind celebrating the achievements of women in all fields," said Jody Pinto, a professor at the Pennsylvania Academy of the Fine Arts in Philadelphia. "Not just political fields – science, medicine, the arts."

One reason stems from the way monuments get added to the public sphere, said Laura Griffith, associate director of the Association for Public Art, a private civic organization dedicated to integrating public art and urban design in Philadelphia.

Statues often are commissioned by private organizations or individuals that not only desire to honor a particular person, but also have the funding mechanisms to do so.

"You have to think about who is commissioning the sculpture, and where the money is coming from, and what the art movement is of that time," Griffith said. "That has to do with what's depicted."

Figurative sculpture reached its pinnacle around the turn of the 20th century. Most sculptors have long since moved from realism to abstraction, another factor Griffith cited in the gender disparity among Philly's statues.

"The arts movements of our current times are not necessarily to do figurative work, though it is still happening and available," Griffith said. "It's not necessarily what artists are interested in exploring."

Yet, the reasons for the void are more complicated than simply changing sculpture movements and a lack of political power, Hayes said.

'WHAT DO WE DO ABOUT THAT?'

Though Philadelphia's statuary largely lacks historical women, it does not exclude depictions of women. There are many allegorical representations of women, depicting them as night, agriculture, or America.

Additionally, the contributions of women are recognized on historical markers throughout the city. Schools, recreation centers and parks also bear the names of women like lawyer Sadie Alexander, singer Marian Anderson and abolitionist Fanny Kemble.

But the lack of any statues honoring such women remains telling, Hayes said. Monuments claim attention in ways that these forms of recognition do not.

"They're big; they take up space," Hayes said. "They claim height and weight and girth. Historical markers don't do that. They don't take up or occupy that same position of signification. It's also a question about what do we do about that?" 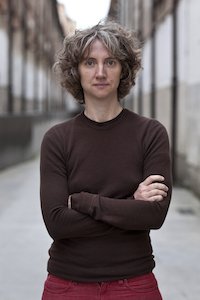 Sharon Hayes created “If They Should Ask,” an assemblage of nine pedestals, to bring attention to the wide gender gap in Philadelphia's statuary.

Acknowledging and encouraging the inclusion of women as artists is an important step, Griffith said. There are many more artists working today than there were 100 years ago and their work is shaping public art.

"There weren't a lot of women artists before the turn of the 20th century anywhere," Griffith said. "Even though women were involved with art, they weren't acknowledged as artists. They just weren't taken seriously."

Pinto pointed to the work of Maya Lin, whom she says "single-handedly" revolutionized the concept of a war memorial when she designed the Vietnam Veterans Memorial on the Washington Mall.

"It broke barriers of war being 'celebrated,'" Pinto said. "When we talk about memorials, when we talk about statues of fighting and men on horseback and the bravado of it – there's no bravado in this Vietnam memorial. There's sadness and kind of reckoning. And that was a woman who did that."

There are also lessons within the Mural Arts program, which Golden founded in the 1980s with the support of the city.

The program sought to fill Philly's neighborhoods with murals telling the stories of their unheralded residents. The program made room for the community as well as the creator, Golden said.

"What was both fascinating and inspiring was that art became a platform, an object and a catalyst for conversations," Golden said. "To then fly into action and create works of art that represented people's lives, or triumphs, or histories, was very, very powerful. It became a way of holding up a mirror to citizens and saying, 'Your life has meaning. It counts.'"

Thanks to Hayes' installation, Golden said she plans to take a closer look at her own program to ensure it appropriately represents women in future murals.

"It means we're going to be very intentional about being cognizant of the fact that we need to see more women in public spaces," Golden said. "That's something that's in our control, that we can do."