We asked six prominent, local women: Who deserves a statue?

There are many Philadelphia women whose accomplishments deserve greater recognition.

But of the hundreds of statues scattered throughout Philadelphia, just three of them depict historical women.

Two of those – Joan of Arc and Mary Dyer – died before William Penn founded the city in 1682. The other statue depicts singer Kate Smith, whose rendition of "God Bless America" is considered a good luck charm among Flyers fans.

Last week, PhillyVoice reached out to several prominent women in the area to see which local woman they'd add to the city's statuary. We asked them to submit a short explanation of their selection and propose a location for the monument.

Here are their responses, which have been edited for brevity and style: 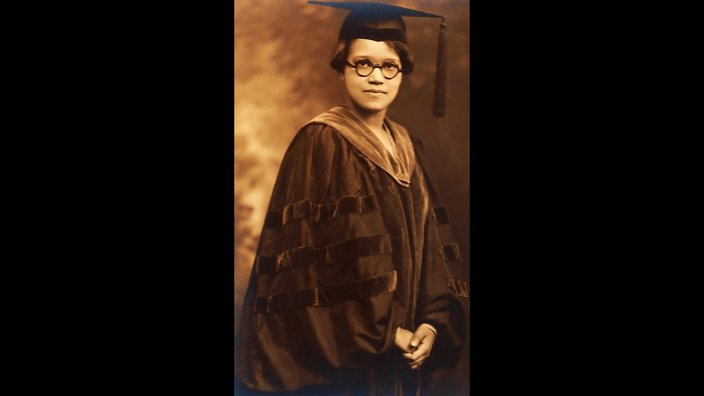 Sadie T.M. Alexander, shown here in 1921, was the first African-American woman to receive a Ph.D. in economics. She earned her degree at the University of Pennsylvania, where she later received a law degree.

When asked to name a Philadelphia woman, past or present, who we’d like to see added to the hundreds of statues across the city, the name of Dr. Sadie T.M. Alexander immediately comes to mind. Her lifelong accomplishments and perseverance are awe-inspiring and beacons of excellence. She was a pioneer in women’s rights, legal rights, civil rights and the rights of African-Americans.

Her lifelong accomplishments and perseverance are awe-inspiring and beacons of excellence.

Alexander was a woman of many firsts. She became the first black woman to graduate from the University of Pennsylvania Law School when she received her J.D. in 1927. She was also the first black woman to receive a Ph.D. in economics, also from the University of Pennsylvania. Alexander was the first African-American woman to be admitted to the practice of law in Pennsylvania. She served as an assistant city solicitor in Philadelphia for a period of 20 years and was again the first African-American woman to serve in this capacity.

She dedicated much of her life to advancing civil liberties and equal rights. President Truman appointed her to the Commission on Civil Rights. She also served on the Philadelphia Commission on Human Rights and was the chair for a number of years. She also helped to found the American Civil Liberties Union.

Alexander was known to have taken great pleasure in reading. Placement of her statue on the Benjamin Franklin Parkway at the entrance to Free Library of Philadelphia would be most appropriate.

I select Marian Anderson, the Black contralto and civil rights icon who was born in Philadelphia in 1897. For me, this Philly daughter's voice still rings through the halls, churches and corridors of the city. Her presence and voice broke barriers. Even as she faced racism and segregation touring the United States as a Black artist, she stood firmly in her creative gifts and influence.

For me, this Philly daughter's voice still rings through the halls, churches and corridors of the city.

She was loved and respected by many: Anderson was an international ambassador for the United States, she sang at the March on Washington in 1963, and she received the Presidential Medal of Freedom, the Kennedy Center Honors, the National Medal of Arts, and a Grammy Lifetime Achievement Award.

Anderson's Philly home from 1924 to 1943 is already registered as a national landmark, but I'd love to see a statue of her placed somewhere prominently along The Avenue of the Arts, maybe near what used to be the Philadelphia Music Academy (now the University of the Arts), where Anderson applied after graduating from South Philadelphia High School in 1921 but was turned away because of her race.

Yolanda Wisher is Philadelphia's third poet laureate. She is the author of "Monk Eats An Afro," a collection of poems about life as an African-American. 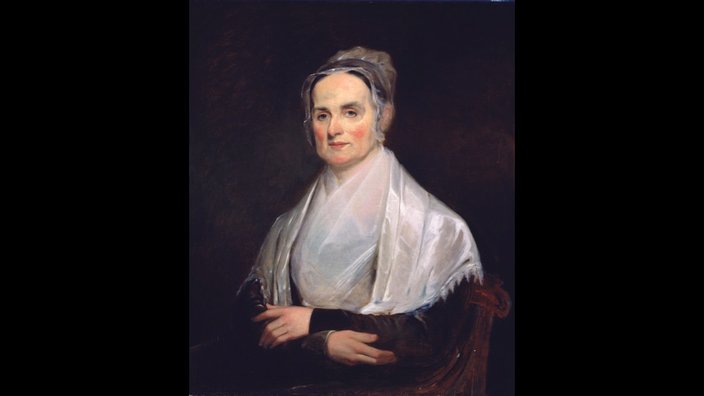 Raised a Quaker, Lucretia Mott was among the founders of the American women's rights movement in the 19th Century. She also helped form the Philadelphia Female Anti-Slavery and headed the American Equal Rights Association.

We would like a statue of Lucretia Coffin Mott (1793-1880) who was a 19th century crusader for equal justice for all, regardless of gender and race. She was one of the leading voices of the abolitionist and feminist movements of her time. Raised in a Quaker community, she became a member of the society’s ministry and adopted its anti-slavery views.

She believed in the rights of children to grow up unhampered by the fetters of prejudice and the seeds of violence.

Mott helped form the Philadelphia Female Anti-Slavery Society in 1833, and later was among the founders of the American women’s rights movement. Mott’s feminist philosophy was outlined in her Discourse on Women (1850), in which she argued for equal economic opportunity and voting rights. After helping to establish Swarthmore College in 1864, she served as head of the American Equal Rights Association.

Her advocacy for the rights of women grew directly from the her lifelong campaign against slavery and racial discrimination. Herself a mother of six and grandmother of 20, she believed in the rights of children to grow up unhampered by the fetters of prejudice and the seeds of violence. Believing that the truth is the most powerful weapon in the struggle for humanity, she went to Washington many times to meet with Congress and the president, speaking up courageously for what she knew to be right. At a time when this country is experiencing greater racial, class and gender divide, we need to have a statue that speaks for equal justice for all.

We would like to place this statue in the new LOVE Park as her commitment to equality and inclusion represents what “true love” is about. The park is also a central location of the city and includes the visitor center where many tourists would see the statue. We are currently the city of brotherly love. It is time to call us the City of Brotherly and Sisterly Love.

Diane Cornman-Levy is the executive director of WOMEN'S WAY, a Philadelphia-based organization that fights for women's safety, economic equity and reproductive rights. 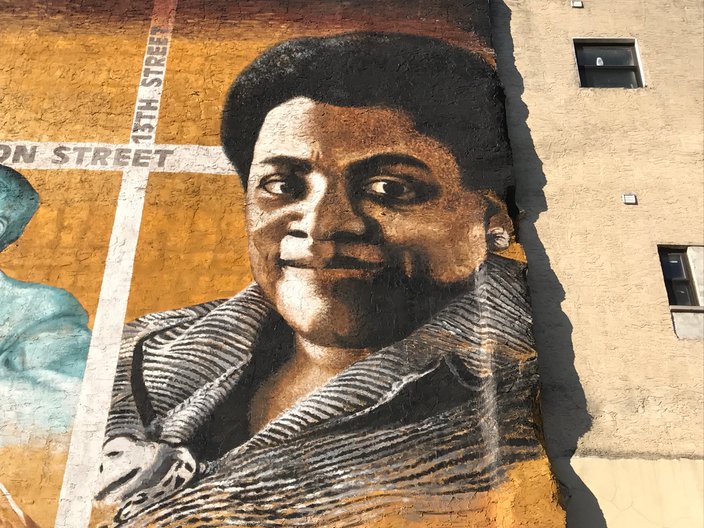 Dr. Ethel Allen, depicted in a mural at Broad Street and Girard Avenue, was the first African-American woman to serve on Philadelphia City Council.

I knew Dr. Allen very well as she and I were often in conversation about gun and gang violence in Philadelphia. At that time, I was still in the District Attorney’s office after a stint at the Redevelopment Authority. Ethel was a fiery orator with a gift of marshaling facts and being totally comfortable in even the most contentious situations. She was short but mighty and quite self-assured, she had a great wit, was totally self-effacing and never spoke about "me." All too often her stature was mistaken for lack of ability to "handle herself." Were these nay-sayers wrong!

It was always the people from the underserved communities she most wanted to serve....

Ethel felt that her medical practice in some of Philadelphia’s toughest neighborhoods, and where physicians were loath to make any kind of house calls, ideally positioned her to represent the people whom she served medically, in the halls of political power. She could help heal individual medical situations, but her desire to make a broader impact in a forum where it counted most ideally positioned her to run for City Council. She took on an incumbent, Tom McIntosh, whom I also knew well, and literally demolished him in the debating arena. She won his District Council seat and went on to run again for another term as a councilperson at large. She won and returned to Council determined to make an even more significant impact on youth health, violence, criminal justice reform, and a host of other issues her constituents needed her voice, influence and talents to address.

Although she was unsuccessful in convincing her party to support her nomination as Mayor of Philadelphia on the Republican ticket, she accepted a position with then-Governor Dick Thornburgh as Secretary of the Commonwealth. Unfortunately, her heart troubles cut short her work and her life in her early 50s.

Ethel’s short but impactful life in medicine and politics demonstrated that a voice of and for the people comes most auspiciously where one might not expect it. In her case, a physician who through her healthcare practice saw that she could fill a critical need in the halls of power, but she sought no power for herself. It was always the people from the underserved communities she most wanted to serve, and serve in an ever-widening number of ways to become a true champion of the neighborhoods.

I know she already has a mural on North Broad Street, but maybe a statue would be an important reminder of the potent effect she had in public service and in public health.

Lynne Abraham was the first woman to serve as Philadelphia's District Attorney, a position she held for two decades.

After looking through some of the notable women who have a connection with Camden, we’d nominate Willa Mae Brown, the first African-American woman to serve in the United States Army from New Jersey (serving in the Women’s Army Corps). Given that she lived in Camden for so long, we recommend the statue be placed in Camden.

The first African-American woman from New Jersey to serve in the United States Army.

Here is her bio, as published by the Camden County Magazine:

“The first African American woman to serve in the United States Army from New Jersey (serving in the Women’s Army Corps).

Returning home after WWII, she owned and operated Ebony Beauty Shop in the Centerville section of Camden from the 1950s through the late 1970s.

She was a member of the Women’s Auxiliary of Cooper Hospital, the Charles Henderson Auxiliary, and attended the First Nazarene Baptist Church for more than 50 years. Ms. Brown was also active in the Camden Association for Economic Advancement ― a group of African-American business owners in the 1960s. Willa Mae Brown passed away in 2003.”

Deb Degillio is the president of American Water Enterprises, the market-based products and services division of Camden-based American Water.