The event, which is being hosted alongside Mike's BBQ, will feature art vendors and live music from Snacktime 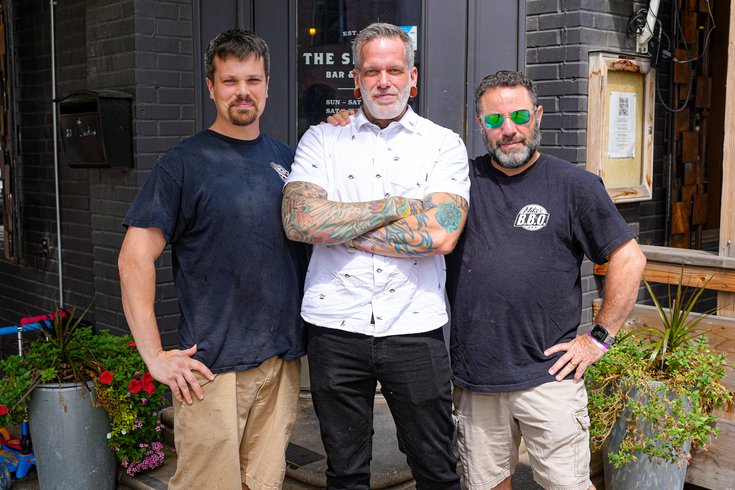 Mike’s BBQ and Sidecar Bar & Grill are hosting a customer appreciation block party on Saturday, Sept. 10 from noon to 6 p.m. Above is Mike Strauss, owner of Mike's BBQ, with Mike Metzger and Will Lindsay of Stockyard Sandwich Co. The trio took over Sidecar Bar & Grille in 2019.

Mike’s BBQ and Sidecar Bar & Grille are teaming up to host a customer appreciation block party next month to thank patrons for their support during the COVID-19 pandemic.

The End of Summer BBQ is taking over the corner of 22nd and Christian streets in front of Sidecar from noon to 6 p.m. on Saturday, Sept. 10. The event will feature a whole roasted pig from Mike's, live music, art vendors and a water slide.

Sidecar will be serving burgers, Detroit style pizza and chicken sausages, along with ice cream from Milk Jawn and pastries from Small Oven Pastry Shop. Drinks will be provided by Penn Beer and Stockyard Cider Co.

“Philadelphia as a whole has done so much for us since the pandemic started, continuously supporting us when the future of our restaurants was very uncertain,” Mike Strauss, owner of Mike's BBQ, said. “We decided to do something fun and show how appreciative we are.”

Strauss opened Mike’s BBQ on Passyunk Avenue in 2018. He took over Sidecar the following year with his business partners Mike Metzger and Will Lindsay, who own Stockyard Sandwich Co. in Fairmount. Stockyard Cider operates inside the sandwich shop on Spring Garden Street.

Snacktime Philly, a brass band that became popular through its impromptu public performances during the pandemic, will be playing music from 2-4 p.m. The band released its first album “Gotta Get Funky” earlier this summer. DJ Lou DiMarco will provide the soundtrack for the rest of the event.

“We’re hoping for a beautiful day, and we expect a really big turnout,” Strauss said.

Those interested do not need to purchase tickets in advance. Food and drink tickets will be available at the event.