'Gotta Get Funky' is available to stream on Spotify and other popular music platforms; 'Sounds from the Street: Live' will be released on July 15 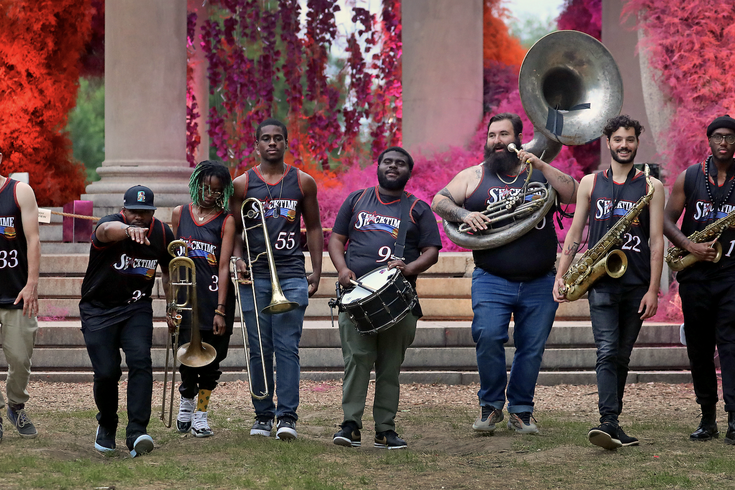 Snacktime, Philadelphia's pandemic-born brass band, released 'Gotta Get Funky,' the second single from their upcoming debut album, 'Sounds From the Street: Live,' which is set for release on July 15.

Snacktime, a seven-piece brass band from Philadelphia, was born out of the COVID-19 pandemic and has since become something of a city staple. After performing at Rittenhouse Square and The Singing Fountain in East Passyunk, the group is expanding its reach with a debut album of original music.

"Sounds from the Street: Live" will be available on July 15 and the band put out a new song from the project on Wednesday. "Gotta Get Funky (While You're Takin' a S***)" is the second single from the album, following the release of "Junkyard Fire!" on June 1.

The songs, which feature the band performing on the fly, improvising and messing around with their hip hop and funk-influenced sound, are reminiscent of what you'd hear walking past the group while they perform in public spaces.

In March, Snacktime submitted the new single as part of NPR's Tiny Desk Contest. The submission was later featured on the network's website as a much-loved entry, highlighting the band's signature upbeat sound.

The 10-track album is meant to provide a way for Snacktime to expand their regular Philly audience to a much wider group of listeners, without foregoing the style they've become known for.

Created during the COVID-19 pandemic as a response to the lack of live music, Snacktime spent much of its early days performing boot-stomping covers of hits by Michael Jackson, Earth, Wind & Fire and Dua Lipa. The band amassed widespread notoriety among residents in neighborhoods across the city.

"Our goal with this album is to share the party we've been having in Philly with the rest of the world," said Sam Gellerstein, co-founder and band leader. "Everything you're hearing on the album is improvised, live from the streets, and tells the story of who we are at our core. We're a band for a hurting city. We're a band to celebrate with."

Snacktime is the product of a years-long friendship between Gellerstein and Ben Stocker, both Fort Lauderdale natives who moved to Philadelphia to study music.

When COVID-19 began to spread across the city, the two formed Snacktime, playing for outdoor diners in Rittenhouse Square and other areas. In the more than two years since, the band has performed at Sixers games, the PHS Flower Show and was on the lineup at the 2021 Firefly Festival.

Though the group sometimes grows to more than 30 musicians enjoying the fun, the foundation of the band includes seven key members, including Gellerstein and Stocker.

"Wherever you are, this album is guaranteed to make you dance and have a good time," said Stocker. "Our music is meant for the people, and we're ecstatic to launch our original music out into the public — in Philly and beyond."

The band is set to host an album launch party at Brooklyn Bowl in Fishtown on July 15, starting at 8:30 p.m. Tickets are on sale for $15 and can be purchased online. Other performers slated to appear include electrosoul artist Max Swan, PHL LIVE Center Stage finalist Taylor Kelly and DJ Xtina.

"Sounds from the Street: Live" will be available to stream on Spotify and other popular music platforms. The track listing is below.