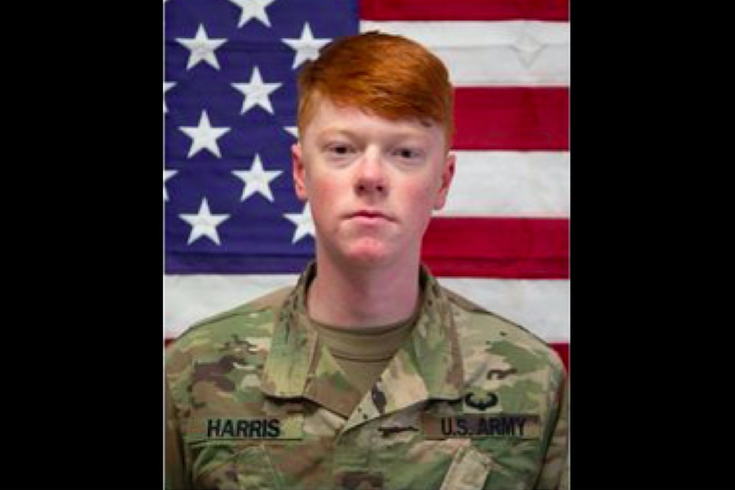 A 20-year-old U.S. Army corporal who was found dead in North Jersey last weekend is believed to have been abducted and killed by a fellow soldier stationed at Fort Drum in upstate New York, Sussex County prosecutors said Monday.

Army officials said the young soldier's body was found in a wooded area of Byram Township in Sussex County on Saturday, when firefighters discovered blood and personal effects in the area. Harris died of injuries from a shooting, investigators said.

Mellish allegedly "abducted" Harris after a meeting between them escalated, Mueller told the New Jersey Herald. Mellish is believed to have driven from upstate New York to the New York City area in a Chevrolet Silverado. The vehicle then crossed into New Jersey.

Another juvenile, who has not been identified, was in the vehicle with Mellish and Harris, according to authorities.

Investigators previously believed Harris had been driving a 2016 Ford Mustang with license plates from his home state of Tennessee. Both the Mustang and Silverado belonged to Harris, Army officials said.

It's not yet clear what may have led to a disagreement between Harris and Mellish. Neither has any known connection to Sussex County, officials said.

Mellish was arrested in Jefferson County, where Fort Drum is located, and is awaiting extradition to Sussex County.

Mueller said criminal charges against Mellish in New Jersey likely will include murder and weapons offenses.

Devastating News. We mourn the loss of this young Soldier. Thank you to everyone who helped look for Corporal Harris.

"We are devastated," said Brig. Gen. Brett Funck, acting senior commander at Fort Drum. "It was well-known here that Cpl. Harris was a great soldier, and as we share our grief with his friends and family, I hear again and again how he was also — and most importantly — a really wonderful, caring person. His death is a tremendous loss for his loved ones, this division and our nation."

Harris was posthumously promoted to the rank of corporal and awarded the Army Commendation Medal.

An investigation into the soldier's death remains ongoing.