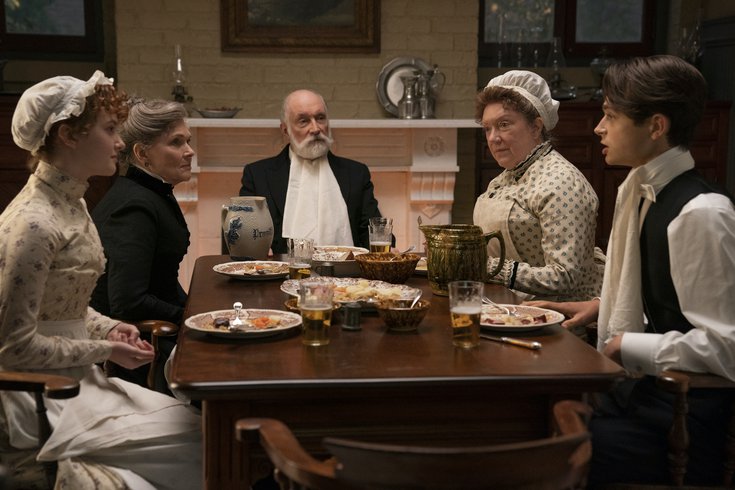 A 19th century silk dress that belongs to the West Chester History Center inspired a costume design on the HBO show 'The Gilded Age.' Above, an image from the first episode.

A vintage garment from a West Chester museum inspired a costume design on the new HBO series "The Gilded Age," which follows a wealthy Pennsylvania woman who moves to New York City in the 1880s.

The dress used on the show was modeled after a 19th century design made of brown tussah Indian silk and accented with detailed velvet embroidery, Vista Today reports.

The original dress will be on display at the Chester County Historical Society at 225 N. High St. on Friday from 4-8 p.m.

The TV show follows a young woman named Marian Brook, who leaves rural Pennsylvania to live with her two old-money aunts in New York City after her father dies in 1882.

One of her aunts is in the midst of a social conflict with their new-money neighbors, a railroad tycoon and his wife. Brook, played by Louisa Jacobson, quickly becomes embroiled in the conflict.

In the show, the dress belongs to a side character named Armstrong, played by Debra Monk, who is the troublesome maid of one of Brook's aunts.

The show takes place amid the backdrop of the Gilded Age, the period in the late 19th century defined by rapid economic growth, mass industrialization and enormous income inequality in the U.S.

It was created by Julian Fellowes, a British actor and author who wrote Gosford Park, a comedy which won the Academy Award for best original screenplay in 2002, and served as an executive producer of "Downton Abbey," another popular historical fiction show.

He is also a member of the House of Lords, the appointed upper body of the U.K.'s parliament.

The garment is part of the museum's broader collection of antique clothing, which stretches back to the 1700s.

While on display, the inspiration for Armstrong's dress will be accompanied by an array of Victorian era accessories including footwear, folding fans, bonnets, purses and more.

The museum also will be showing its large collection of antique quilts and coverlets from roughly the same era.

The dress is being debuted by the museum amid Downtown West Chester's Spring 2022 Gallery Walk, which is meant to show off the borough's art scene through 18 small exhibits.

For the event, all metered street parking will be free between 4-8 p.m. Friday.

The first season of "The Gilded Age" can be streamed on HBO Max.