More than 1 million Venezuelans have fled to Colombia seeking food, medicine and shelter 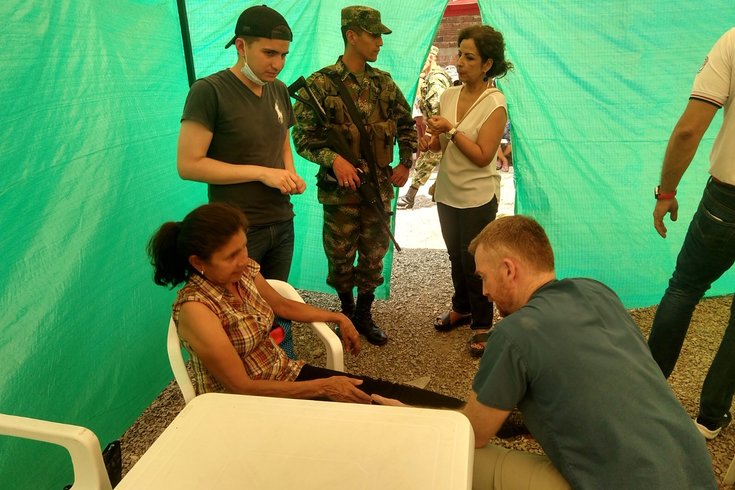 Dr. Tim Bryan, lower right, treats a patient at a field hospital set up on the border between Colombia and Venezuela. More than 3.4 million Venezuelans have fled the country in search of food, shelter and medicine. "I like to go with people who just ignore the politics of it and go help people," says the U.S. Navy veteran.

Dr. Tim Bryan stood on a bridge in Colombia watching as a steady stream of Venezuelan migrants crossed over the border below, hoping to receive food, shelter and medical assistance.

Many of them had walked more than 30 miles, passing through multiple rivers and jungle terrain to reach Cucuta, a Colombian city near the Venezuela border. A few came from as far as Caracas, the Venezuelan capital located some 550 miles away.

"It's happening, from my understanding, across almost the entire Venezuelan border," said Bryan, an emergency physician at Temple University Health. "It's a lot of people – millions and millions of immigrants and transient migrators."

Bryan spent two weeks in Cucuta earlier this year treating Venezuelan refugees and migrants as part of a medical team assembled by Refugee Relief International, a nonprofit that provides medical assistance to victims of armed conflict around the world.

Like Bryan, many of the organization's volunteers are veterans willing to assist in war zones and other dangerous areas. And the needs along the Colombian border are significant.

Hyperinflation and political upheaval have led to severe shortages of food and medicine in Venezuela. Some 3.4 million Venezuelans have fled the country, according to the United Nations Refugee Agency. About 1.1 million have entered Colombia, which borders western Venezuela.

The political unrest had prevented humanitarian aid from entering the Venezuela until last week, when the International Red Cross delivered its first supply – power generators, distilled water and three surgery kits each capable of serving 10,000 people.

At one point, the Venezuelan government had barricaded a bridge on the Colombian border in an apparent attempt to prevent humanitarian aid from entering the country.

Lacking viable options for food and medicine, many Venezuelans have traveled long distances – even while sick.

"The crazy part is that the people who were making the trips were the ones well enough to make the trip," Bryan said. "And a lot of the times, they came and they were really sick. But, really, what they came for was to get medicine for their father or grandmother who was ... unable to make that 100-kilometer trip, who was way sicker than they were." 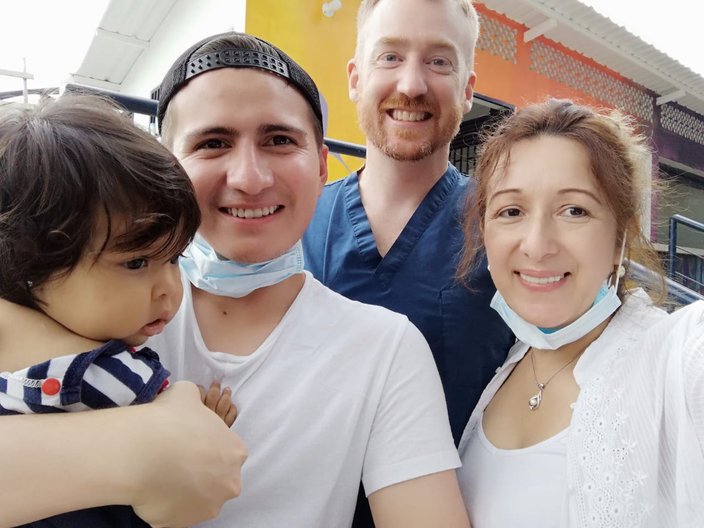 Dr. Tim Bryan, second from right, traveled to Colombia earlier this year as part of a medical team assembled by Refugee Relief International, a nonprofit that provides medical assistance in dangerous areas, including war zones.

'THEIR RESOURCES ARE OVERWHELMED'

With the assistance of the Colombian government, the Refugee Relief International team established a field hospital along the border. Over two weeks, they treated more than 800 people, reducing the inflow to Cucuta's overwhelmed health system.

Many of the refugees and migrants had suffered tremendous weight loss and were borderline malnourished, Bryan said. Many others had preventable infectious diseases, including malaria or hepatitis A. Many women badly needed to see an obstetrician.

Bryan saw one 19-year-old girl – an expectant mother in her third trimester – who had had open-heart surgery as a baby. Knowing she would have a high-risk delivery, she found her way to Cucuta.

"She had made the journey saying, 'All my doctors there said they wouldn't be able to help me. This is going to be very bad,'" Bryan recalled. "So, she made over a 100-kilometer trip to see if the Colombians could help her – and we did."

Some people came with outdated prescriptions to treat conditions diagnosed years ago, Bryan said. But with medicine supplies lacking in Venezuela, they had been unable to gain treatment. Bryan saw at least one prescription dating from 2017.

Likewise, one man came with squamous cell carcinoma. Bryan said a doctor had diagnosed him with the skin cancer years ago, but told the man that he couldn't provide any treatment.

"But there we are in the tent fixing it," Bryan said. "He's like, 'Oh, this is great. Thank you.' That, to me, from a Venezuelan refugee perspective, described what we saw."

The university health center has been running on "disaster mode" for months, Bryan said. The emergency department was operating at three or four times its capacity when he visited. And its obstetrics services also were overrun.

"Everybody on the private sector and the public sector in Colombia is doing everything they can to pitch in and help," Bryan said. "But you're looking at a total public health catastrophe when you have a completely porous border and incredibly sick people just pouring over. Their resources are overwhelmed." 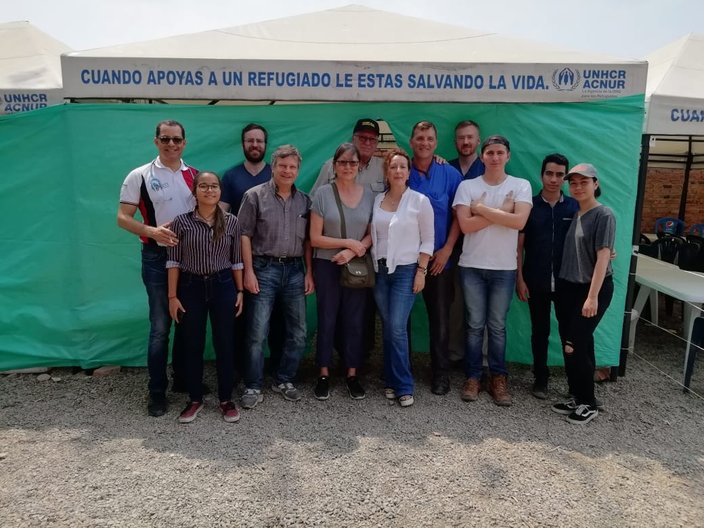 A team from Refugee Relief International spent two weeks on the border of Colombia and Venezuela providing medical assistance to more than 800 Venezuelan migrants. Dr. Tim Bryan, a Temple Health physician, fourth from right, was among them.

When Refugee Relief International asked Bryan to join a medical team at the border, Bryan said he "jumped at the opportunity" to assist, recognizing the need for support.

"If you're in a situation where someone who has a lot of experience in conflict medicine is needed and you're asked to go, I feel obligated to go," said Bryan, a Navy veteran. "I like to go with people who just ignore the politics of it and go help people."

Bryan's team needed several days in Colombia to prepare its clinic and gather supplies. Thus, only six of their 13 days ultimately included a full clinic.

Another hurdle: The team needed to set up and tear down its clinic each day due its location at the border.

"You can't go in there and just like set up shop and stay there right on the border region," Bryan said. "It's just not tenable from a security standpoint at this time."

Now back in Philadelphia, Bryan is working to ease the challenges faced by any nonprofit medical teams that assist in Cucuta. His team is creating a database based on the medical information it collected.

That way, future medical teams have a better idea of the types of patients they will be treating the supplies they will need to secure. Perhaps, they will be able to stay longer and create a more sustainable solution.

"It's a global health crisis when you have such a large country that has such tremendous resources fall into such disarray from a public health perspective," Bryan said. "It is literally inundating every border country it has with preventable infectious diseases. In today's society, those things become global very quickly.

"And it's important that we all recognize that, irrespective of our political views, it's a real crisis from a public health perspective and that we need to be aware."