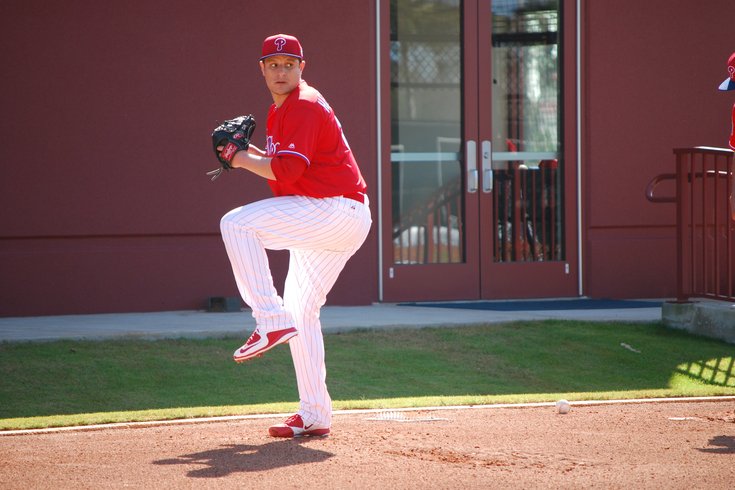 CLEARWATER, Fla. – Veteran right-handed relief pitcher David Hernandez, the front-runner for the Phillies closer job, has tenderness in his right elbow, according to manager Pete Mackanin.

Hernandez signed a one-year, $3.9 million contract in December -- the only major league free agent contract the Phillies doled out this winter -- but hasn’t pitched in a game since March 1.

“He’s got some issues with his elbow, I don’t know what they are. Just, issues,” Mackanin said. “I don’t know if it’s even serious or if we’re just backing off on it.”

So is he in pain?

“I guess he has a little bit of tenderness there in his elbow. I’m not sure what it is. I don’t like to get too involved with that, specifics. As far as I know, he’s just been pushed back. That’s the best answer I can give you. I don’t really know.”

Mackanin is responsible for updating the media with injury updates, but apparently hadn't received a clear update from his own bosses. So general manager Matt Klentak clarified Hernandez's status after announcing that Aaron Altherr would miss 4-6 weeks following wrist surgery.

"Triceps tendinitis," Klentak said. "He is supposed to throw (on the side on Wednesday). More of a day-to-day thing."

When approached and asked before Mackanin spoke why he hadn't pitched in a game in a week, Hernandez never gave the impression that there was an injury issue keeping him off the field.

“It's my first spring in two years,” said Hernandez, who had Tommy John surgery in April of 2014. “Just getting back after throwing a lot, throwing into November. I threw a lot coming into camp and I just kind of want to take a step back and make sure I'm as fresh as I can be going into the season.”

Hernandez said he’d likely get back into a game later this week. His manager seemed a little more worried about the pitcher’s status.

“I’ve got concern,” Mackanin said. “I want to know exactly how far he’s set back, obviously he’s set back. I’m just curious to find out how soon he can get back out there.”