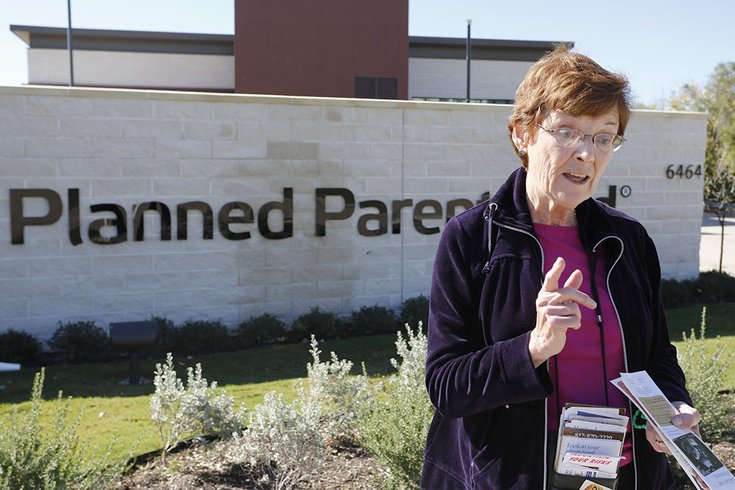 Marian Honquest, who is opposed to abortion, talks to a reporter in front of Planned Parenthood in Fort Worth, Texas, in this file photo from November 2013.

The program provides contraceptives, screening and treatment for sexually transmitted diseases and other primary health services to 4 million patients each year, many of them low-income or uninsured, at more than 4,000 clinic sites. Planned Parenthood serves about 40 percent of that caseload.

MORE HEALTH: A great exercise move for people who hate to work out at the gym

None of the funds provided for Title X services may be used for abortion. That has been true since the program was created in 1970. But abortion opponents have for decades complained that since many Planned Parenthood affiliates that receive Title X support also provide abortion, the federal family planning money can be improperly commingled with funds used for the procedure.

The new regulations erase previous program rules requiring that women with unintended pregnancies be given “nondirective counseling” on all options, including birth, adoption and abortion.

Under the new rules, Title X recipients would be banned from making abortion referrals in almost all cases. This would reverse existing rules, which require that a referral be given if a woman requests one. Counseling would still be allowed but no longer required.

The new rules “will ensure compliance with, and enhance implementation of, the statutory requirement that none of the funds appropriated for Title X may be used in programs where abortion is a method of family planning,” says the executive summary.

Organizations would also have to physically separate facilities that provide Title X-funded services from those that provide abortions.

Abortion-rights and family planning provider groups were quick to decry the rules.

“This rule intentionally strikes at the heart of the patient-provider relationship, inserting political ideology into a family planning visit, which will frustrate and ultimately discourage patients from seeking the health care they need,” Clare Coleman, president and CEO of the National Family Planning & Reproductive Health Association, the group that represents Title X recipients, said in a statement.

But abortion foes have been pushing hard for the changes.

“We thank President Trump for taking decisive action to disentangle taxpayers from the big abortion industry led by Planned Parenthood,” said Marjorie Dannenfelser, president of the anti-abortion Susan B. Anthony List. “The Title X program was not intended to be a slush fund for abortion businesses.”

Added Kristan Hawkins of the group Students for Life of America, “This is a life-saving policy change, as abortion vendors have used these family planning resources to underwrite their deadly enterprise.”

Defunding Planned Parenthood has been a goal of the anti-abortion movement for decades. Republicans thought they could make the group ineligible to provide care to Medicaid patients at part of their bill — which did not pass — to rewrite the Affordable Care Act in 2017. The Planned Parenthood provisions were struck from the bill under Senate rules even before the measure collapsed.

New York Attorney General Letitia James promised to file suit against the regulation, saying it was “dangerous and unnecessary.” California Democratic Attorney General Xavier Becerra also said he is prepared to sue, particularly because an estimated one-quarter of all women potentially affected by the changes live in California.

However, a similar set of rules, issued by President Ronald Reagan’s administration in 1987, were eventually upheld by the Supreme Court in 1991.

The rules will take effect in stages, starting 60 days after they are published in the Federal Register. The portion requiring physical and financial separation would not take effect for a year.