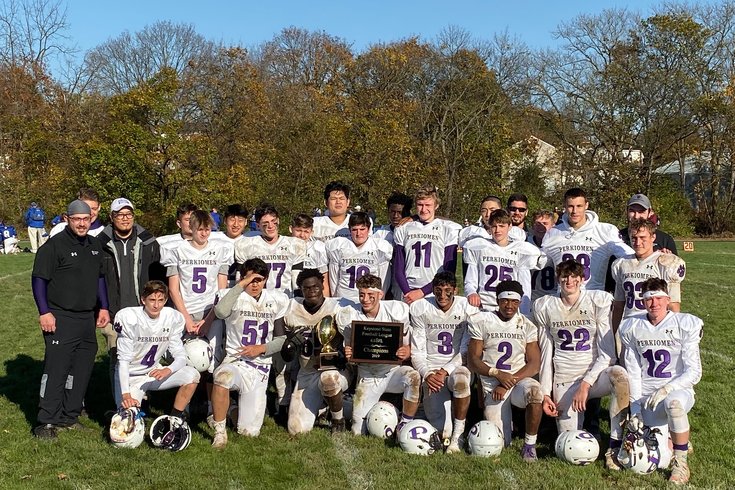 Football isn’t going anywhere, at least for a long, long while. Though, recently, what has emerged is empirical evidence showing far fewer boys are participating in 11-player high school football.

According to a National Federation of High School Associations survey released in late August, high school participation in football nationally dropped to a 26-year low. The NFHSA reported the number of 11-player football participants down 6.5 percent from its 2009-10 peak, and the cause is mostly due to the fear of CTE, or chronic traumatic encephalopathy, which is an injury to the brain found in a large number of former football players.

Schools locally have felt the sting. In 2016, Springfield (Montco) had to cancel its season because of lagging numbers.

Mark Devey, headmaster of Perkiomen School, is aware of all of that. It’s why Devey made the revolutionary move, in Pennsylvania, to eight-man football in 2018. Devey, a former soccer star at North Carolina, wanted to keep football alive at the small Montgomery County boarding school of 340, where half the student population are boys.

“I love football and our numbers were really low,” explained Devey, who came from New England, where 8-man football is prevalent. “In particular, we lacked big linemen to protect our quarterback. I thought we might have had to cancel our games in 2018. We had to be more creative. Ken Baker, our athletic director, had spoken to other schools recently to try eight-man football.

“I thought it's better for us to lead and to push forward with something that better matched the number of kids we have at our school of our size, and the type of athletes that we typically have. We wanted to be more forward thinking than just trying to drive home an idea that was no longer working for us.”

Eight-man football consists of three down linemen on offense, and the field is 120 yards long, the same as a regulation field, but it’s 40 yards wide, as opposed to the regulation 53 1/3-yards width. On defense, you can rush all eight players, though it’s rare and highly risky. The time frame is the same as regulation high school games, with four 12-minute quarters.

The other fun part about it is that either team rarely punts.

Imagine playing after-school tackle pick-up games with friends, that’s this — but with pads.

So, in 2018, the Panthers played eight-man football. There was one glaring problem: No other schools in the area played it. Perkiomen School was forced to play a seven-game schedule against teams from Connecticut, New York and New Hampshire. It meant long round-trip bus rides, and it didn’t help the Panthers, who went 1-6.

Last Saturday, the Panthers finished a 6-1 season with a 32-14 victory over Mercersburg to claim the first KSFL championship — and some history, in a sense, by becoming the first eight-man football state champs in Pennsylvania.

A look at Perkiomen School's eight-man football team in action.

Devey wanted to provide his students with a chance to play.

“We love scoring in the U.S., and the eight-man game is wide open, so why not put our necks out there and retain football, which I cared most about,” Devey said. “Ken had already been pushing for eight-man football, and we agreed. In no time, we have a rally point and interest in a game that’s great to watch.

“It was a matter of having the guts to pull the trigger. In the last few years, a number of other local schools have shown interest in playing eight-man football and in joining the league. What’s great about it is it doesn’t matter whether the schools are public or private. There’s been a handful of schools that have shown interest.

It might not be football news, but it's big local high school sports news nonetheless.

Holy Ghost Prep announced this week in an email to students and alums that it would be leaving the Bicentennial Athletic League at the end of this school year and will play an independent schedule beginning in 2020-21. This move comes months after a failed bid by Holy Ghost to join the Philadelphia Catholic League.

Here's what school president Gregory Geruson said in that email to students:

After a thorough, year-long analysis of Holy Ghost Prep athletics—which included input from HGP student-athletes, our entire coaching staff, current and alumni parents, several HGP alumni representatives, and with authorization from our Board of Trustees—we will leave the Bicentennial Athletic League (BAL) at the end of this school year and will play an independent schedule starting in the 2020-21 school year.

Holy Ghost Prep has been a proud member of the BAL since the 1970s. With the recent departure of Devon Prep and both Lower Moreland and New Hope-Solebury slated to leave the BAL for the 2020-21 school year, there was unanimous agreement that it was time for us to make a change as well.

We explored numerous options and playing an independent schedule for the short-term future provides us with the best of both worlds—allowing us to remain in the PIAA District One and state playoffs while building more competitive schedules in each sport. In addition, being independent gives us flexibility to continue to investigate several new league possibilities in what is an ever-changing Philadelphia area athletic landscape.

Declaring our athletic independence is a bold move for Holy Ghost Prep. The idea of going independent was discussed with every varsity coach and all are in agreement that this is the best strategic move for us at this time. Every Holy Ghost Prep coach is confident in his/her ability to build top-notch schedules that will have our student-athletes regularly test themselves against quality opponents from all over the area. Additionally, six of our varsity sports are already competing completely outside the BAL (ice hockey, lacrosse, swimming, rowing, indoor track, and ultimate frisbee) and all six of these programs are thriving.