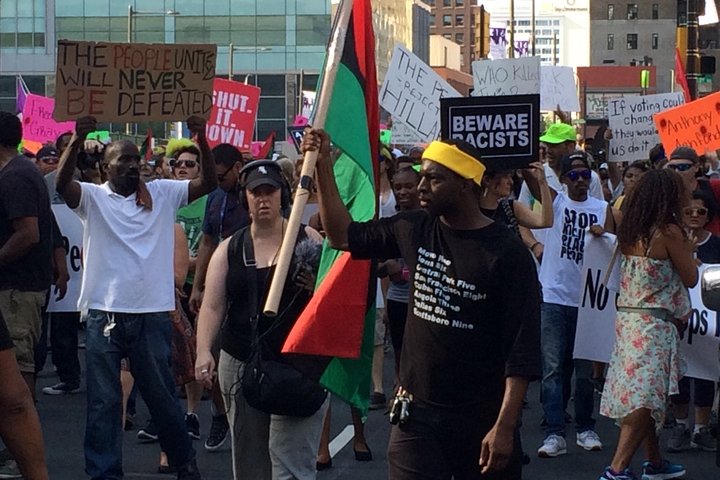 A downed tree on the 3400 block of w. Queen Lane in East Falls is pictured after powerful winds blew through the Philadelphia region Sunday, April 3.

Saturday night in Philadelphia was relatively tranquil; that is, until around 11:30 p.m., when huge gusts of wind and rain — mixed with hail and accompanied by lightning — viciously blew through the area.

The rain had stopped Sunday morning, but the powerful winds had not. And thousands were left without power as a result. Examples of wind damage across the city included a downed tree on the 3400 block of W. Queen Lane in East Falls and collapsed scaffolding on 19th Street in Center City.

The National Weather Service has issued a High Wind Warning for much of the area for Saturday until 7 p.m. Sunday, with gusts expected to be between 25 to 35 mph. Some are expected to be as strong as 60 mph. The Alberta clipper could also potentially bring snowfall to parts of New Jersey, where the High Wind Warning remains in effect from midnight Saturday until 2 p.m. Sunday.

The strongest winds came Sunday morning and diminished in the afternoon. Thousands were impacted by downed power lines (PECO's outage map here) and trees, damage to some buildings and difficult driving conditions. PSE&G, New Jersey's largest utility, released a statement and referred residents to their outage map in the event of service disruptions. 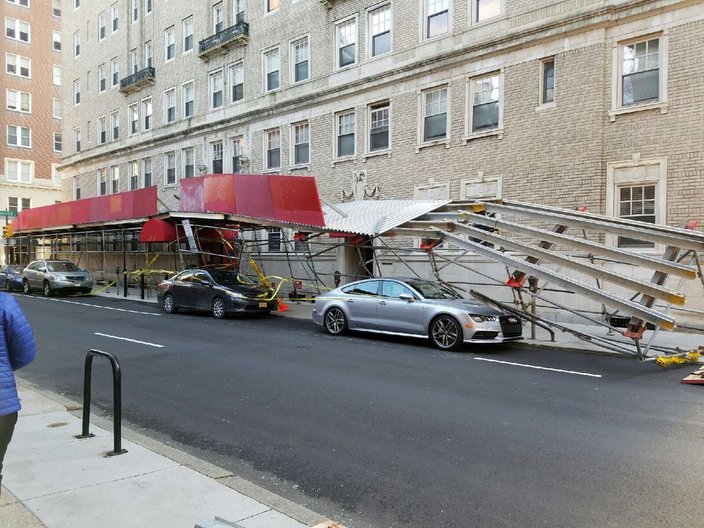 Scaffolding on 19th Street in Center City, Philadelphia is knocked over after strong winds slammed the region.

"We take every storm with the potential for outages seriously and have additional personnel scheduled and on standby, with auxiliary equipment at the ready," said John Latka, senior vice president of electric and gas operations for PSE&G. "Strong winds can make it difficult for our trucks to get around, and our crews can't go up in buckets to make repairs until the winds subside."

Storms in the process of nearing/moving off the Atlantic Coast. Lots more wind on the way overnight into Sunday morning.

After the winds subside, the work week isn't expected to be particularly pleasant either. Low temperatures will be in the 30s Monday and in the 20s Tuesday, forecasters predict.

Here's the full forecast from the National Weather Service:

Monday: Rain likely, mainly after 1pm. Mostly cloudy, with a high near 62. Southeast wind 5 to 14 mph becoming southwest in the afternoon. Chance of precipitation is 60%. New precipitation amounts between a tenth and quarter of an inch possible.

Monday Night: Rain likely, mainly before 9pm. Mostly cloudy, with a low around 30. Chance of precipitation is 70%. New precipitation amounts of less than a tenth of an inch possible.

Tuesday: Mostly sunny, with a high near 44. Breezy.

Tuesday Night: Mostly clear, with a low around 26.

Wednesday: Mostly sunny, with a high near 50.

Wednesday Night: A chance of rain after 9 p.m. Mostly cloudy, with a low around 41. Chance of precipitation is 40%.

Thursday: Showers likely. Cloudy, with a high near 60. Chance of precipitation is 70%.

Thursday Night: Showers likely. Cloudy, with a low around 43. Chance of precipitation is 70%.

Friday: A chance of showers. Mostly cloudy, with a high near 55. Chance of precipitation is 40%.