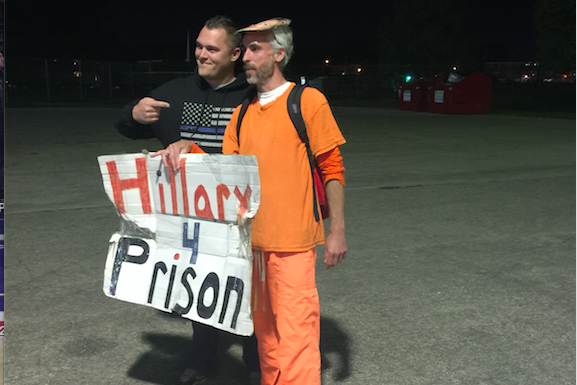 Howard Caplan poses for a photo outside his Northeast Philadelphia polling place a few minutes before polls closed on November 8, 2016.

When we last spoke with 47-year-old Howard Caplan, he was marching along the intersection of Roosevelt Boulevard and Grant Avenue with a big old sign that read “Hillary 4 Prison.”

That was two weeks ago.

On Tuesday night, he voted against the Democratic candidate for president at Gen. Harry Labrum Middle School in Northeast Philly.

Suffice it to say, as he did at that heavily trafficked intersection, Caplan drew much attention in, and outside, the polling place that was relatively empty at the end of a high-turnout day where one division reported roughly 600 of 790 voters had cast ballots.

Sporting an orange jumpsuit and a Hillary mask, he entered the voting booth around 7:45 p.m., responding to questions from poll workers who quickly, and happily, realized that he was “the guy from Grant and the Boulevard.”

In the weeks since our story ran, he’s “trolled the Hillary office on Bustleton Avenue” when Madeline Albright and Natalie Portman visited, and garnered some attention outside Saturday night’s Katy Perry concert – aka a Clinton GOTV rally – at the Mann Center.

As for activity on the corner, he said passersby started calling out his name. The ones who appreciated what he was doing, that is.

“I got hit with an egg and a Dunkin Donuts coffee carrier,” he said matter-of-factly. “Someone threw a Snapple bottle, but it missed me by 30 feet.” 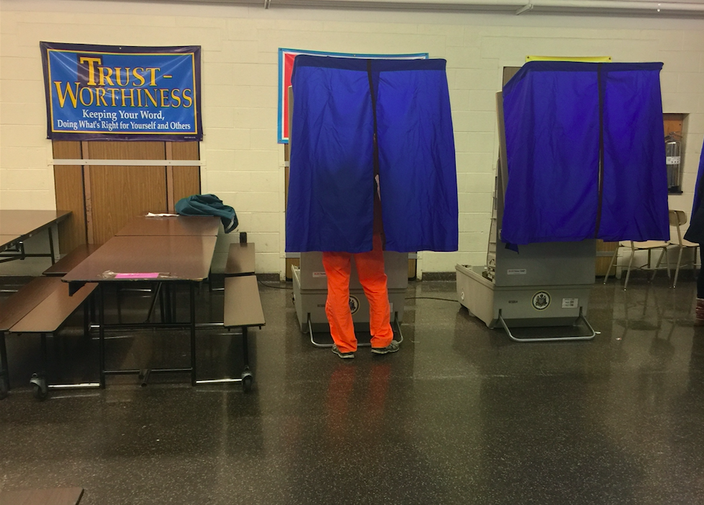 After voting on Tuesday, people hanging outside the polling place posed for pictures with him and talked about how heavy turnout in this pocket of Northeast Philadelphia bodes well for Donald Trump. Several Trump signs were posted outside while a few for Hillary leaned against a wall.

Like most Americans, he’ll be closely watching the results as they come in Tuesday night.

He’s convinced Trump will win Pennsylvania despite many predictions to the contrary. But what will he do now that the election is over?

“I’ll either celebrate,” he said, “or start a revolution.”