How will history judge Pope Francis' visit to Philly?

“The legacy is his — not ours,” says documentary filmmaker Sam Katz

Pope Francis will arrive in Philadelphia in just four days, commencing what is predicted to be one of the largest — and, perhaps, most memorable — events in the city’s storied history.

But how might the papal visit ultimately sit among the most prominent, or even infamous, Philadelphia gatherings? Its legacy could be determined by any variety of religious, political or logistical factors.

“My sense of this is whether one person shows up or a million people show up, his presence will lift the spirits and hopes of everyone,” said Sam Katz, executive director of History Making Productions, a documentary film company, and a Philadelphia history buff. “The legacy is his — not ours.”

Will the papal visit be remembered as the source of rejuvenation and healing within the Archdiocese of Philadelphia, besieged for years by clerical abuse, dwindling church attendance and school and parish closings?

Or perhaps as a moment that inspired political change on hot-button issues like immigration, income inequality or criminal justice reform?

Will it be recalled as the moment Philadelphia arrived as a premier host to large-scale events? Or will the varied road closures, security measures and transportation alterations mar the papal visit as a logistical failure?

The answers to these questions will begin to take shape Tuesday, when Pope Francis arrives in Washington, the first stop on a three-city tour that concludes with a two-day visit to Philadelphia to celebrate the World Meeting of Families. Francis will speak at Independence Hall and participate in the Festival of Families on Saturday before hosting a papal Mass on the Benjamin Franklin Parkway on Sunday.

“Whenever you have a special occasion — if you have guests over to your home — it really energizes the whole family,” said Jim Caccamo, a theology and religious studies professor at Saint Joseph’s University. “This is the biggest guest that Catholics could possibly have at the biggest party.”

The Archdiocese of Philadelphia has endured a tumultuous decade, at least according to its portrayal in the news. Headline after headline seemingly detailed clerical sex abuse — at least 24 Philadelphia priests have been defrocked — or declining attendance, as dozens of parishes have merged in recent years.

In some ways, it has served as a microcosm of the American Catholic church. Three million fewer Americans identify as Catholic than in 2007, according to the Pew Research Center.

But that is not the entire story of the church, Caccamo said. And the papal visit presents an opportunity to change that perspective.

Pope Francis quickly captured world attention through his charisma and by shifting more focus to issues of social justice. He also has transformed the Vatican’s tone — but not theology — on issues of abortion, divorce and homosexuality.

His approval rating among all Americans soared to 76 percent in 2014, but now stands at 56 percent. That mark isn’t quite as high as those enjoyed by Pope John Paul II, but it tops those given to Emeritus Pope Benedict XVI.

Locally, Catholic leaders have cited similarities to Pope John Paul II’s visit to Philadelphia in 1979. Many in the region can recall the Papal Mass at Logan Square and the inspiration that followed. Pope Francis seems to carry a comparable appeal to the "Rock Star" pope.

“There’s a special relationship here,” Caccamo said. “I think the archdiocese needs to figure out how to extend and continue that.”

Archbishop Charles Chaput draws hope from World Youth Day in Denver, a 1993 event that also included a papal Mass with John Paul II. Denver did not see an immediate spike in church attendance, baptisms or priestly vocations. But Chaput claims the event reignited the spirit of the local church.

Getting more people in the pews might be dependent upon Pope Francis’ interactions with immigrants, women, minority groups and victims of clerical abuse, according to Royal Rhodes, a religious studies professor at Kenyon College in Gambier, Ohio.

“I don’t think there’s going to be this massive wave of return to the church,” Rhodes said. “But, at least, it’s causing people to say, ‘Why did I leave?’

“I think within the very traditional framework of Catholicism, he’s trying to build bridges that people might use if they decide they want to return to a Catholic identity and preparing the Catholic community to generously receive them.” 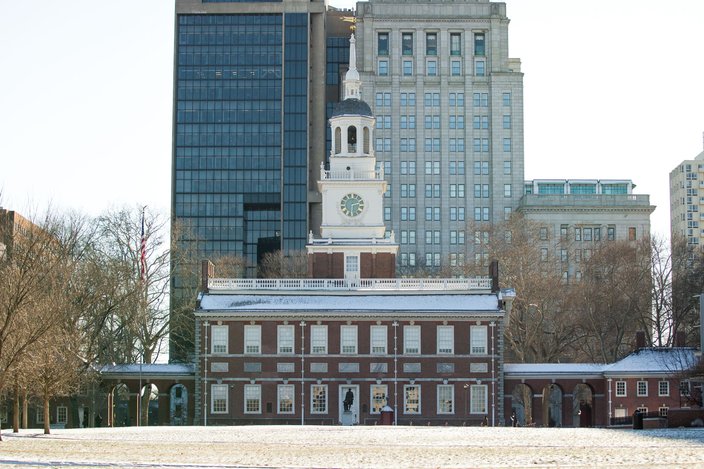 Pope Francis will deliver a speech on immigration at Independence Hall on Saturday. (Thom Carroll / PhillyVoice)

The public will catch its first glimpse of Pope Francis in Philadelphia when he steps in front of Independence Hall on Saturday to deliver a speech on immigration, arguably the most controversial issue in American politics.

“The immigration speech may be the most important thing he does in Philadelphia,” said Charles Reid, a law professor at the University of St. Thomas. “But who knows?”

Francis, known for his unpredictable nature, could provide an unforgettable gesture at any time. Plus, his schedule — which includes a highly-anticipated prison visit — is loaded with opportunities for influential comments on varying contemporary issues.

But given the political urgency, Reid foresees the possibility of Pope Francis’ immigration remarks having a long-lasting effect. He pointed to Pope John Paul II’s trip to Poland in 1979, a visit credited for triggering the demise of communism in Eastern Europe.

“I think we’ll see a ripple effect,” Reid said. “Will it happen Oct. 1? No. … Maybe not an overnight or immediate effect, but long-term it has to have a huge effect.”

Pope Francis already has broached immigration in Europe, Reid said, encouraging Catholics to extend hospitality to all new arrivals — not just Christians — through their governments.

“We’re going through a nativist resurgence we haven’t seen since the 1840s,” Reid said, citing a period when anti-immigration sentiment was directed toward Catholics. “His message will be a message of welcoming, of compassion, of a transnational notion to common good.”

Francis also has been critical of economic inequality, the idolatry of money and trickle-down economics. While speaking in Bolivia earlier this summer, he decried “an unfettered pursuit of money.”

Pope Francis likely will broach those topics throughout his U.S. trip.

Joe Kaboski, professor at the University of Notre Dame, expects Pope Francis to challenge Americans on issues of money idolization, environmental protection and caring for the poor and marginalized.

“Lots of people will pick and choose what to hear, or they will hail him or dismiss him,” Kaboski said. “But I don’t think the pope wants to tell us the answer to our economy or society, but he wants to tell us the questions. He is a pastor and he is trying to open people’s hearts, to baptize their values.”

Workers build a stage ahead of Pope Francis' scheduled visit on Eakins Oval in view of a statue of George Washington in Philadelphia. (Matt Rourke / AP Photo)

Perhaps the biggest wild card — beyond Pope Francis’ penchant for spontaneity — revolves around the logistics of the papal visit.

Much has been written about the massive road closures, heightened security, lengthy walking distances and the SEPTA ticketing fiasco. Local groaning grew so large that event planners seemingly created a marketing campaign in response. And the pope repeated it this weekend in a video message to Philadelphians.

Have the logistics scared off potential pilgrims? Or did event organizers overestimate the number of attendees? No one will really know until this weekend.

Beyond hosting the Olympics, Lolli said there are not many events greater in magnitude. He does not believe Philadelphia ever has been tasked to this extent, a sentiment Mayor Michael Nutter acknowledged last week.

If pilgrims can move place to place without any major problems, Lolli said the papal visit could elevate Philadelphia as a leading destination for large-scale events, an attribute already claimed by local tourism officials.

“I think all eyes are going to be on the city,” Lolli said. “There will be a report card. This could be wonderful and do great things and bring all sorts of ancillary business — or it could be the total opposite.”

Regardless, Philadelphia then will turn its own eyes toward the 2016 Democratic National Convention. But the papal visit provides a broader crowd that political conventions don’t attract.

“What are we going to do with all this international press?” said Elizabeth Barber, associate dean of Temple University’s School of Tourism and Hospitality. “You can’t pay for all of the international press that we’re going to get. From a tourism point of view, how do we want to capitalize on that?”

Despite the negativity portrayed in the local press, Barber said impressions presented by the national and international media have greater implications on the tourism and hospitality industry. The local grumbling over logistics has not become a national or international issue.

When Pope Francis arrives Saturday, she expects Philadelphia to bask in the spotlight.

“I think it will open doors,” Barber said. “Lots of times when people come to a convention, they enjoy the city. The next time they have a vacation, they bring the family back. I think this will have the same kind of impact.”

A GAME OF NUMBERS

Katz warned against using attendance figures to measure the historical implications of the papal visit.

Only about 45,000 fans saw the Phillies win the 2008 World Series in person. But Katz said that did not define the significance of the city’s first championship in 25 years.

“Success is about how many people hear him,” Katz said. “It’s factually true that not that many people will put their eyes on him. … Because once you get past a certain number of yards from the altar, you’re not going to see him live. You’re going to see him on a video board.

Within that context, Katz said, will come the legacy of the papal visit.

“I think when you take the sum total of all that he does while he’s here, that will be the aggregation of what this is about,” Katz said. “Not any one event or any one speech or any one ceremony.”