The holiday(s) roll on 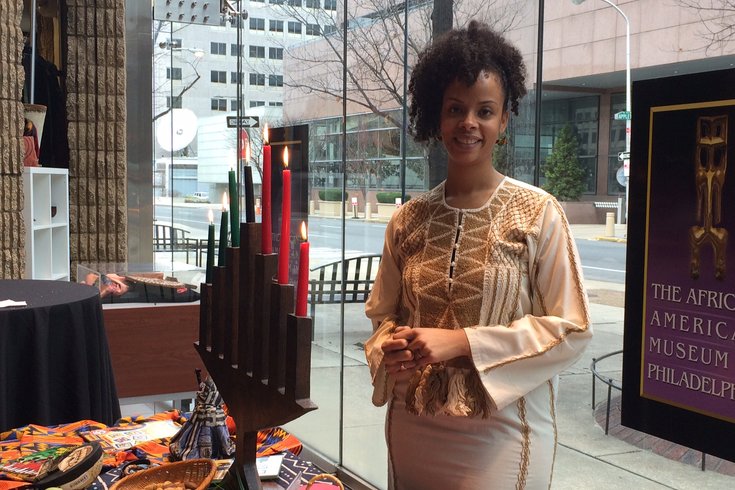 Nwasha Edu helped to celebrate the 49th anniversary of Kwanzaa.

The holiday(s) keep rolling on.

Not only was Saturday the traditional second day of Christmas, but it was also the start of Kwanzaa.

Also, St. Stephen's Day, for which you can either thank – or blame – that Philly New Year's Day tradition, the mummers.

Nwasha and Montsho Edu of Mercer County traveled to Philadelphia's African American Museum at 7th and Arch streets to celebrate and remind visitors about "the rituals and symbolism" behind Kwanzaa.

There was a candle lighting ceremony and demonstrations of Aftican instuments and story-telling. Events continue Sunday.

A made-up holiday celebrating its 50th anniversay, Kwanzaa is meant to honor African American traditions and the fruit of the harvest.

While it has spritual overtones – the candelabra used is much like a menorah in the Jewish faith – the focus is on family, community and culture.

Edu explained the central black candle in the display is meant to represent unity, knowledge and wisdom.

The red candles remind followers of stuggle and finding purpose, she said. The green are meant to show the meaning found through struggles overcome – "the fruits of the struggle."

"It is meant to bring meaning and recognize our ancestors," said Edu, whose ancestors hail from south Africa and also West Africa.

"Ritual is important, part of our daily consciousness," she explained.

She has embraced the celebration as a means for forming new good habits and connections.

"It's great to have an idea, like a New Years resolution, but to make that last you need to have a strategy," she said of her own approach.

Cousins Dan Love, 30, from Cincinatti, and Randy Love, 21, from Voorhees, came to the museum to explore post-Christmas Center City.

They stumbled on the Kwanzaa celebration, a holiday that they don't celebrate, even though they see its value.

"It brings families together and is a good celebration of values," said Dan Love.

Genevieve Minick, 43, of Drexel Hill, had not celebrated the holiday recently, but seeing the display "rekindled" her interest.

Across town at 15th and Locust streets, about 200 people had gathered by 10:00 a.m. at the Irish bar known as Phado to drink stout and cheer on their team.  It was part of a day-long round of Premier League soccer contests, featuring a match between Leicester City vs. Liverpool.

Chad Renshaw, 39, his wife, Mary and their two young sons came in from Haddonfield, NJ to watch the Boxing Day games.

"I learned what Boxing Day was from watching the Premier League," he explained. Mary's Irish grandparents had celebrated the day, which has come to be soccer's equivalent of the connection between American football and Thanksgiving.

The holiday is not religious, though. It is celebrated instead by parading around in a crew and asking friends and neighbors for money.

And here's where Philly's New Year's Day connects: the groups of Irish lads who go house-to-house, dressed in disguises, were known as mummers.

The Philadelphia Recreation Department was placing bleachers on Broad Street Saturday in advance of next Friday's mummers parade.