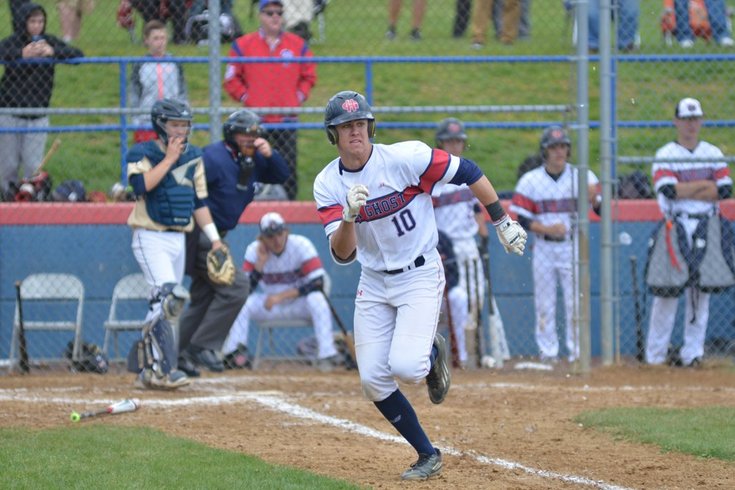 Holy Ghost's Nolan Jones reached base safely in over 75 percent of his plate appearances this season.

Even though his son's high school baseball career had come to an end just a few minutes earlier, Tom Jones couldn't help but smile. It had nothing to do with the game itself -- an 11-9 season-ending loss to Radnor in the PIAA District 1 AAA semifinals -- or with the fact that his 18-year-old hit a majestic three-run home run in his final at-bat.

No, no. That look of paternal pride was all about what comes next.

You see, on Thursday night, his son Nolan, the now-former Holy Ghost Prep shortstop, will very likely be selected in the first round of the MLB Draft. In March, he was ranked by Baseball America as the No. 16 prospect in this year's draft.

"It's been a lot of fun," Tom said. "If someone takes him, they take him. And he's the same way. He's not too worried about where he goes. Whoever wants him, he wants to help them. That's his attitude."

And, although it's highly unlikely, what if that team happens to be his hometown Phillies?

"That would be incredible," he added.

But that doesn't mean the power-hitting lefty will go where he is selected. He'll have to decide between going straight to the pros or heading to the University of Virginia, where Nolan has a full baseball scholarship waiting for him.

"I haven't decided yet," Jones said of his plans. "I'm going to wait and see, but I'm really excited to see what happens."

And what about his parents, they've got to be pushing him towards that college education, right?

"Honestly, whatever path he chooses, we're behind him all the way," his father said. "Either way. Even if he signs pro, the college puts money into an account for him to use after his career is over. So, either way, we know that college will get paid for, and that's important."

"He's definitely the best athlete to come through Ghost," Rossomando added. "And by the time his career's done, we could be talking about him as the best baseball player -- or athlete in general -- ever to come out of Bucks County. He's that good."

According to his high school coach Vince Rossomando, a 2002 graduate of Holy Ghost who has coached Jones for the last three seasons, the shortstop is ready for the big time.

"The kid is a fierce competitor," he said. "He has a phenomenal work ethic, and despite all that talent, he's very humble. And he's mature. If he decides to skip college, he'd fit in just fine in a professional clubhouse."

Unfortunately for Virginia baseball fans, it doesn't sound like there's much reason for Jones to wait any longer before turning pro.

"He's absolutely ready," Rossomando said. "If I didn't think that was the case, I would've sat him down and had a talk with him about that. But he's ready."

So what is it about the Langhorne native that's made him such a highly regarded prospect?

As one anonymous MLB scout said recently, "What's not to like about him?"

According to Jones, who proved to be a more-than-capable pitcher (although those days are likely now behind him) and above average fielder, he does his best work in the batter's box.

"I think my bat is the biggest thing I bring to the table," he said. "I'm a big lefty, which works in my favor, and I have the power for it too."

Jones bulked up between his junior and senior seasons by about 20 pounds. And after a back injury forced him to miss the beginning of the season, Jones put that power on display. Here's a look at his numbers from this season, according to maxpreps.com:

With an on-base percentage of over .775 this season, it's more than just his power that makes him such a dangerous hitter.

"He's got that rare combination of power and average that you rarely see from players, especially this young," Rossomando said. "The power numbers speak for themselves, but his ability to draw walks is amazing. A lot of guys will get frustrated when the other team is pitching around them. Not Nolan. He'll wait until you make a mistake and then make you pay. Or, he's totally comfortable taking the walk and making you pay on the base path, one of the places he's often overlooked."

Jones also excels in the field, where his range and plus-arm have some thinking that a move to the outfield may be in his future.

Whatever position he's playing -- and whatever city he's doing that in -- those around Jones believe he's a rare talent that is headed for big things.

"He's definitely the best athlete to come through Ghost," Rossomando added. "And by the time his career's done, we could be talking about him as the best baseball player -- or athlete in general -- ever to come out of Bucks County. He's that good."

Jones' older brother Peyton, however, may have something to say about.

That's because Peyton, a 2014 graduate of Holy Ghost and Penn State signee, may also be drafted this month. Only his big night will come a few weeks later ... at the NHL Draft.

Peyton is currently ranked as the 23rd-best North American goalie prospect after a solid season with the USHL's Lincoln Stars last year. He went 19-11-2-1 with a 2.34 GAA, a 0.922 save percentage, and four shutouts.

"It's incredible," Tom Jones said. "Peyton's had a great year, but since that draft's not until a few weeks later, we'll have to wait and see."

So what was that household like when the two brothers were younger?

"Very competitive," said the father. "And it was good because Nolan was actually a pitcher [when he was younger] and Peyton was a catcher, so they worked together a little more. But then in hockey, Peyton is a goalie and Nolan played forward, so they were always competing and there was always a lot of competition in the house."

Although Jones was invited to Secaucus, N.J. to attend the draft, he's opting to stay home so he can be with his family and friends.

But no matter what happens on Thursday night, Jones is only looking forward.