Phillies should be able to score big in second round of MLB draft, too 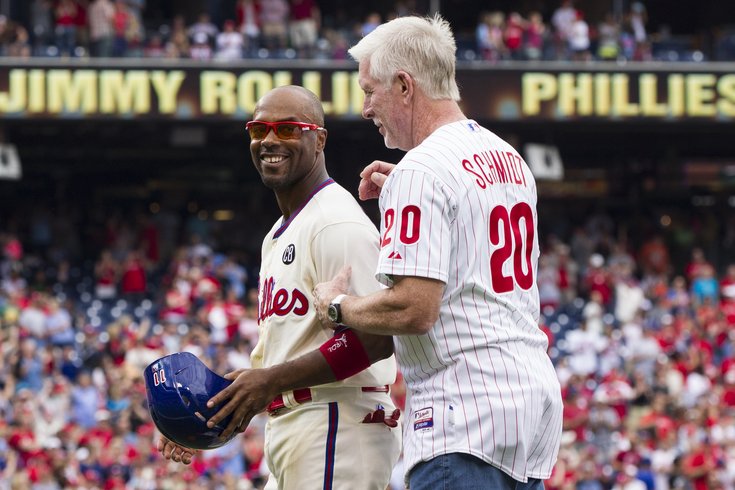 Two of the best hitters to ever don red pinstripes -- Jimmy Rollins and Mike Schmidt -- were both second-round draft picks.

The Phillies will get Major League Baseball’s Draft started two weeks from tomorrow, on Thursday, June 9.

They will make the first overall selection in the draft for the first time since 1998, when they chose University of Miami slugging third baseman Pat Burrell. It’ll be a defining moment for the rebuilding franchise (although, as drafts go, it probably won’t be clear if they hit or missed on the pick for at least a few years).

As for who the Phillies will select with the top pick, University of Florida left-hander A.J. Puk seems to be the most popular choice among the draftniks required to publish mock drafts for the past two months. But others, along with college outfielders Kyle Lewis and Corey Ray, California High School outfielder Mickey Moniak, and even New Jersey (Barnegat High School) lefty Jason Groome, are surely under consideration, too.

The fact that there isn’t a consensus No. 1 pick – no Bryce Harper, or Stephen Strasburg, or Ken Griffey Jr. – could benefit the Phillies as we mentioned in a draft preview earlier this month.

Along with the No. 1 overall pick comes an assigned slot value of $9.015 million. But since there isn’t a surefire, bonafide superstar waiting to go with the first overall pick, the Phillies surely won’t need to spend all of that on the first player they pick.

Instead, the Phillies are more likely to use the roughly $10.5 million slotted for their first two picks (or $11.4 million for their top three picks) to nab more than one elite talent, as the Houston Astros did in 2012 (again, see the story from earlier this month). The Phils front office can get someone they really like with the 1-1 selection, but also manipulate the dollars wisely to get top talent (players that fall for signability reasons, perhaps) with their next selection(s), too.

This all leads to this point, which easily gets lost with the hype that comes with owning the first overall pick: there should be plenty of talent available to the Phillies with their second pick, too, which will come with the 42nd overall selection of the draft, also scheduled to take place two weeks from tomorrow night. (Rounds 3-10 follow on Friday, June 10; the 40-round draft then concludes on Saturday, June 11).

While mining for first-round talent in the second round (or beyond) isn’t easy in a draft format that already comes with a high degree of difficulty in terms to projecting future major league stars, the Phillies have fared OK in Round 2 when you consider it’s where they found the best player in franchise history and the team’s all-time hit king, too.

The Top 10 Second Round Picks in Phillies History

(According to Baseball-Reference.com career WAR)

If you’re more of the glass-is-half-empty kind of guy, you might look at that list and say, “Well, I only see a handful of above average major leaguers.” But the unpredictable nature of the draft itself sometimes makes it just as likely to find future All-Stars in the second round as you can in the first round.

The Top Second Round Picks in the Last 10 Years

(According to Baseball-Reference career* WAR)

*That means more recent picks, like Mets lefty Steven Matz, are left out

The Phillies also had as many second rounders (Tommy Joseph, 55th overall in 2009) as they had first rounders (Tyler Goeddel, 41st in 2011) in their starting lineup on Wednesday afternoon in Detroit. Ditto in their current starting rotation, with Vince Velasquez (second round, 58th overall, 2010) and Aaron Nola (first round, 7th overall, 2014). The only other player on the current 25-man roster selected in the first two rounds is former first-rounder Emmanuel Burris (33rd overall, 2006).

Needless to say, it’s an imperfect science, this whole MLB Draft business, when guys like Emmanuel Burris and Joe Savery are former first rounders and Giancarlo Stanton and Jordan Zimmermann didn’t go until the second round. Of course, the list of elite talent that lasts beyond the first two rounds is almost endless, too, with Norristown’s own Mike Piazza, heading to Cooperstown this summer, easily leading that list.

As for some of the intriguing names that could be available to the Phillies when they make that 42nd overall selection in 15 days:

• LHP Joey Wentz – The Kansas high school lefty was labeled by MLB.com as the “toughest sign” among the crop of high school pitchers in the draft. Of course, they also have him going 21st overall in their latest mock. But if he has signability issues…

• RHP Cal Quantrill – The son of long-time major league pitcher Paul Quantrill, the Stanford starter hasn’t thrown a pitch this spring after undergoing Tommy John surgery in 2015. He was projected to go in the top of the first round this time last year.

• SS/3B Drew Mendoza – Again, if the Phillies use their slot money wisely, they should nab a first-round talent in the second round. MLB.com referred to Mendoza, a Florida State commit, as “the most unsignable first-round talent” in the draft. Mendoza, who is represented by Scott Boras, is listed as the 43rd best prospect in the draft by Baseball America.

• RHP Alec Hansen – Like Quantrill, Hansen, a University of Oklahoma pitcher, was projected as a top half of the first round guy a year ago. Baseball America still says Hansen has the “best pure stuff in this year’s draft class” among starting pitchers after Riley Pint (who is projected to go in the top five picks). Hansen had an elbow injury in high school. So did Cole Hamels, too, though.

• LHP Jeff Belge – Perhaps more of a guy the Phillies hope falls to them in the third round (78th overall), Belge, a Syracuse-area prep pitcher, is listed by Baseball America as “a physical specimen, sitting at 6-foot-4 and 235 pounds” with “an athletic, balanced delivery and a clean arm action.” But he’s also nearly blind in one eye. Dodgers top prospect Julio Urias, one of just two players MLBPipeline.com lists above J.P. Crawford on its top prospect list, hasn’t let an eye issue deter his own progress (although his surgery was cosmetic).