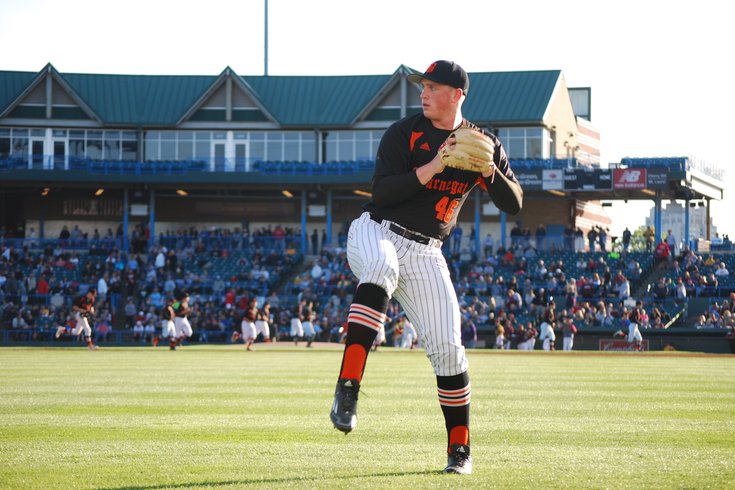 Barnegat High School senior Jason Groome, considered by many as the top prospect available in next month's draft, warms up before a game at Campbell's Field in Camden on Monday night.

CAMDEN – The two lines for concessions on either baseline – with pretzels, pizza, water, and sodas for sale – were consistently 30-40 people long. But it still didn’t seem like there was a single empty seat at Campbell’s Field, formerly the home of the now-defunct, independent league Camden Riversharks.

Behind the last row in each section, there were more spectators packed four and five deep, trying their best to get eyes on the teenager many consider the best high school baseball player in America.

Thomas Groome, 72, didn’t have to peek over anyone’s shoulders.

Jason Groome’s grandfather, who moved his family from Elizabeth, N.J., to Barnegat 42 years ago, was in a perfect perch, seated in the small handicap section behind section 100, directly behind the first base side on-deck circle.

“I’m very proud of him, very proud of him, you know?” said the elder Groome, who wore a canary-colored t-shirt with his last name and his grandson’s number, 46, on the back. “I played ball myself, my brother, too. His father. We were all sportsmen.”

Jason Groome impressed his grandpop and the some 5,000 or so others in Camden on Monday night, including the two or three sections set aside for major league scouts. The Phillies, who hold the No.1 pick in next month’s draft (June 9) had two of their most influential front office people at the game: amateur scouting director Johnny Almaraz and Charley Kerfeld, a special assistant to the general manager.

In a game billed “Ks4TheKids,” with Groome’s Barnegat High School matched up against Gloucester Catholic and their own ace, Tyler Mondile, who could also be selected in the draft’s first few rounds, Groome, the 17-year-old left-hander with the mid-90s fastball and dancing, darting curveball, struck out 14 of the 21 batters he faced, including the final eight, in a 1-0 loss at Campbell’s Field.

All proceeds of the game – admission was $5 – went to charities selected by each pitcher: Children’s Hospital of Philadelphia (Groome) and 15-year-old Audubon High three-sport athlete Kari Jenkinson, who is battling brain cancer (Mondile).

Mondile tossed the game ball to Jenkinson shortly after the game went final.

“I’m just so happy so many people showed up, sold out,” Groome said. “It was great. I give all props to Mondile. He pitched a great game like me but they came out on top on a couple of errors. I’m not mad, I’m just happy we had such a great turnout.”

Groome’s scholastic season is drawing to a close. He’ll pitch in the Shore Conference Tournament this weekend and the state playoffs follow next week.

As soon as a week from today, his high school career could be over. And then the focus will shift to the team that plays across the Delaware River from Campbell’s Field, the team that holds the top pick in the draft, which gets underway three weeks from Thursday.

“If the Phillies were to take me it would just be all of my hard work paid off,” Groome said. “I know the draft isn’t the biggest picture, but it’d be pretty awesome to go 1-1. I’m just taking it day-by-day and living in the moment.”

Campbell's Field capacity is 6,500. Luxury boxes are closed, but otherwise this place is jam-packed. pic.twitter.com/0MvRoIDTg0

The scouts populated the portion of the jam-packed crowd behind home plate had to like what they saw from the 6-4, 230-pound Groome. The lefthander struck out 14 in six innings; he allowed two hits and walked two.

The only run Groome allowed came in the third, when Gloucester Catholic sophomore Jason Bobiak led off with a single (much to the delight of the maroon-clad crowd), advanced to second on a passed ball, and scored on an error. Groome, who had to sit out for almost three weeks when the NJSIAA ruled that he violated a transfer rule, somehow fell to 1-2 on the season.

But that obviously wasn’t a number anyone holding a notebook was concerned with on Monday. The number on the radar gun, 95 MPH, now, that was one they likely jotted down and brought back to their draft rooms as teams begin to stack their draft boards.

Phillies general manager Matt Klentak said on Friday that his area scouts from all over the country are flying into Philadelphia this week to present their cases for the players they’ve been watching regularly.

The Phils' brass obviously has kept tabs on Groome. But there are others, including University of Florida left-hander A.J. Puk, Mercer University outfielder Kyle Lewis, and Louisville outfielder Corey Ray, who they also could consider with the top pick in an uncertain first round.

There was a report last week that the Phillies could be zeroing in on Lewis.

“As far as the first pick is concerned, we’ve started to narrow our focus a little bit down to a more manageable number of players,” Klentak said diplomatically. “But we still have almost a month to go and plan to use every bit of it before we make our final decision.”

“We’re going to be in a limousine headed to Secaucus!” his grandfather said with a hearty laugh, referencing the site of MLB Network’s studios. “I’m happy, happy for him. I’m very happy that he’s come this far.”

Groome, who does his best to ignore the growing group of scouts that have attended his games in the last year, picked up momentum with each passing inning on Monday.

Matched up against a Gloucester Catholic team that was ranked No.1 in South Jersey and No.4 in the state, Groome battled command early, walking two of the first six batters of the game. But after the error-filled third inning, Groome took off, firing fastballs by batters and following them with his hook.

“My fastball was working for me,” Groome said. “I was getting first-pitch strikes. My curveball came along in the fourth inning and I just stuck with it, got some K’s and kept going back to it.”

Mondile, a righthander with a fastball that also topped off at 95 MPH on Monday, did an admirable job sharing the mound with Groome. He struck out 10 and allowed three hits and one walk in seven innings.

“It was exhilarating with all of these people here,” Mondile said. “I was excited from the get-go. To pitch against a guy like that, it’s a lot of fun.”

The two pitchers share an agent and both work out at the same complex, Maplezone Sports Institute in Garnet Valley. They went to dinner together at XFINITY Live! on Thursday after doing a television interview together.

“I told him whoever scores first was going to win,” Mondile said. “We went over lineups, defense. I got a lot of info out of him that I didn’t think I was going to get, so that was pretty cool.”

The two opponents gave each other scouting reports?

“I did not,” Mondile clarified. “He gave me a scouting report, I didn’t give him one.”

Groome fared pretty well without it. And three weeks from now, he’ll probably do alright, regardless if he’s the first or fourth pick in the draft.

“We’re going to be in a limousine headed to Secaucus!” his grandfather said with a hearty laugh, referencing the site of MLB Network’s studios. “I’m happy, happy for him. I’m very happy that he’s come this far.”