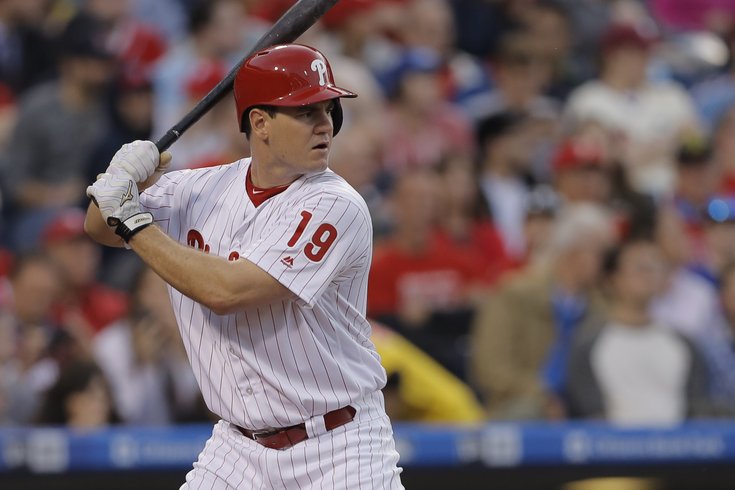 It was bound to catch up with them eventually.

The Phillies, MLB's best team in games decided by three runs or less, dropped a close one to the Marlins on Monday night at Citizens Bank Park, falling to Miami, 5-3, in the series opener.

The Phillies batters scored just three runs in support of the young righty -- but just one before he was pulled from the game --and he could have used a few more. In his 46.2 innings of work this season, Eickhoff has seen his teammates score just 13 runs. That 2.51 runs of support per nine innings is fourth-lowest in the bigs, and a large part of why he has has MLB-worst six losses despite allowing three runs or less in seven of his eight starts this season.

Manager Pete Mackanin decided to pinch hit for Eickhoff with the Phillies trailing 3-1 in the bottom of the sixth after Tyler Goeddel hit a two-out double. Emmanuel Burriss then preceded to line out to Marlins CF Marcell Ozuna, ending the inning.

Eickhoff, who was at 97 pitches when Mackanin called him back to the dugout in favor of Burriss, allowed three runs (all earned) on six hits, including solo home runs by Ozuna and Justin Bour, and two walks while striking out four Marlins.

The Phillies stayed in the game until the end but were unable to put together the rally they needed to tie the game. After cutting it to a two-run game thanks to Maikel Franco's sacrifice fly, Carlos Ruiz came to the plate representing the tying run with a man on third and two outs. However, Marlins closer A.J. Ramos struck Chooch out looking

Here are some more observations from South Philly.

•    Tommy Joseph got his first career hit in the bottom of the sixth inning. Starting his second game of the season, the 24-year-old first baseman led off the frame with a single up the middle off Marlins starter Adam Conley. Unfortunately for Joseph, the excitement didn't last long as Freddy Galvis followed up by grounding into a double play.

•    South Jersey native Andrew Bailey hit a bit of a speed bump against the Marlins. After starting the season with Lehigh Valley, Bailey had been pitching quite well for the Phillies since being called up in late April. In fact, the 31-year-old former A's closer had held the opposition scoreless in seven of his eight appearances (8.2 innings) on the young season. That, however, was not the case Monday night.

Bailey surrendered a leadoff double in the top of the seventh to Adeiny Hechavarria, who advanced to third on a wild pitch. Following a walk to Ichiro, Hechavarria scored on a sacrifice fly by Derek Dietrich. Then, Bailey walked Martin Prado and Mackanin decided he'd seen enough.

Bailey's final line? One-third of an inning, one hit, a pair of earned runs, two walks and a wild pitch. That caused his ERA to nearly double, jumping from 2.08 to 4.00 on the season.

The problem is that the Phillies lack the offensive firepower to score runs in big chunks. Nine of their 10 hits against the Marlins were singles. Heading into play Monday, hey ranked 15th (out of 16) in the National league in each of the following categories: runs scored, doubles, home runs, slugging pct., and OPS. The Braves are the only team worse, and they rank last in each of the aforementioned categories.

More and more, it seems like they need to record three hits (or some combination of hits, walks and errors) in an inning before they're able to score, and that was pretty much the case again on Monday. In the fourth inning, Carlos Ruiz walked. He then moved into scoring position on a single by Galvis and scored -- barely -- on another single by Goeddel.

Then, in the bottom of the seventh, Herrera reached on a single that ricocheted off Marlins reliever Dan Barraclough. He was followed by Cesar Hernandez, who grounded into what should've been a fielder's choice, but instead resulted in an error. Maikel Franco walked to load the bases and Ruiz, who played a role in the Phillies first two runs, grounded into a fielder's choice that allowed Herrera to score.

And in the bottom of the ninth, despite the first two batters reaching safely, the Phillies were unable to score the three runs they needed to tie the game. Instead, they managed just one.

•    Tyler Goeddel has been coming on lately. He's recorded at least one hit in six of his last seven games, including a career-high three hits against the Marlins. Over that span, he's hitting .375 with a pair of doubles, five runs batted in and three runs scored. He finished Monday night's game three-for-four with a double and an RBI. Since April 23rd, the Rule 5 outfielder is hitting .310 (13-for-42) in 14 games. Prior to that, he had recorded just one hit in his first 16 career at-bats.

•    Carlos Ruiz made a pair of plays that were atypical for the defensively-gifted catcher.

In the top of the fifth, Miami starter Adam Conley laid down a sacrifice bunt after Adeiny Hechavarria led off the inning with a double. Instead of simply checking the runner and then throwing to first, Ruiz opted to throw immediately to third. By the time Franco caught it, not only had Hechavarria safely made it back to second, but there was no chance to get Conley at first. After a walk to Derek Dietrich, Hechavarria scored on a Martin Prado sacrifice fly, and had it not been for an ensuing double play, that mistake by Ruiz could have really cost the Phillies.

Then, in the top of the ninth, Ruiz allowed Giancarlo Stanton to reach on catcher's interference. Luckily, that also failed to hurt the Phillies.