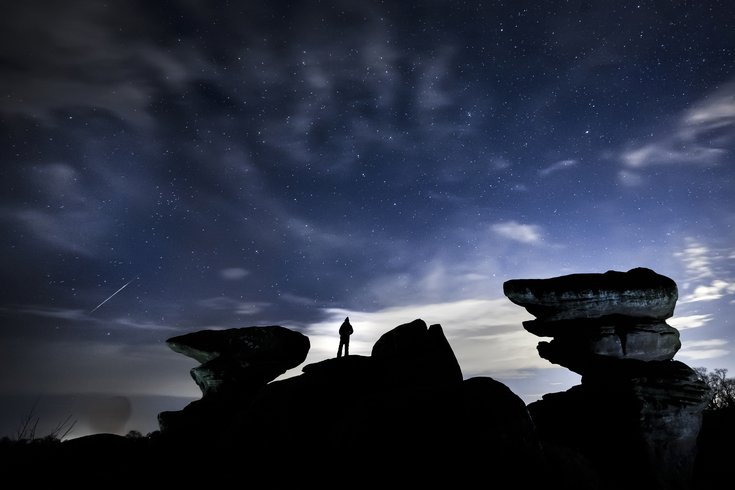 The final meteor shower of 2021 could be one of the most vibrant of the year. The Geminids will light the sky this week, peaking late Monday night into early Tuesday morning and remaining visible until Friday.

The shower could be visible from the Philadelphia region as early as 9 p.m., but experts say that it will be the most prominent early Tuesday morning. No equipment is necessary, as meteor showers are easiest to see with the naked eye.

The phase of the moon is important in determining how visible a meteor shower will be. As the moon is expected to be 77% full overnight, the shower may not be as easy to see until after it sets around 2 a.m.

For those who want to head to bed early, or who have trouble seeing through Philly's light pollution, NASA will broadcast the meteor shower live from the Marshall Space Flight Center in Huntsville, Alabama, beginning at 9 p.m. on the NASA Meteor Watch Facebook page.

"Rich in green-colored fireballs, the Geminids are the only shower I will brave cold December nights to see," said Bill Cooke, head of NASA's Meteoroid Environment Office.

6ABC describes the meteor shower as one of the most active of the year, with an average of 100-150 meteors per hour.

August's Perseid shower produces a similar number of meteors, but Geminids are unique because of their range of colorful hues.

The Geminids – named after Gemini, the constellation from where the meteors appear to originate – are caused by debris from 3200 Phaethon, a celestial object whose origins NASA says are subject to debate. And they're fast: the Geminids travel at 78,000 miles per hour.

They're easily visible and vibrant because of their density, which allows them to get as low as 29 miles above Earth's surface before burning up. Scientists believe that 3200 Phaethon is either an extinct comet or asteroid.