Howard Eskin is definitely trolling us all on Twitter, right? 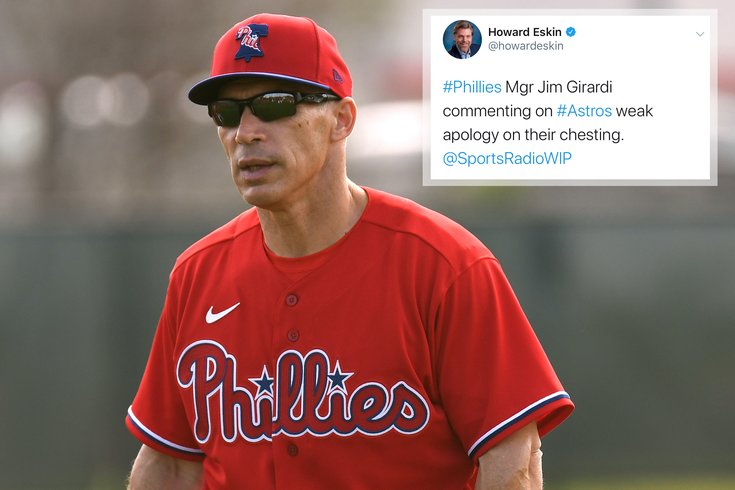 On Wednesday, something truly incredible happened.

Long time Philly sports radio and TV personality Howard Eskin made a Twitter gaffe for the ages — he called Phillies outfielder and former MVP Andrew McCutchen, "Lawrence McCutcheon," which of course, is not his name but is the name of a former NFL running back who hasn't played in nearly 40 years.

A common mistake I make on Mccutcheon first name. Its Andrew. So go ahead and make this a federal case. The twitter police can be dopes. Bite it https://t.co/m5U3jjWupD

It was so bad that even the Phillies poked fun at him on social media.

Hell, it was so bad that we even wrote an entire story ranking Eskin's best worst mistakes on Twitter over the years — and, boy, are there some gems.

But not even 24 hours after the whole Larry debacle, Eskin was back at it again, calling Phillies manager Joe Girardi "Jim" and mixing up cheating and chesting.

At this point, it's hard not to wonder if Eskin is simply trolling us with this latest mistake. And that very well may be the case, even if the previous evidence doesn't help his defense. Furthermore, even if this one is a joke, that doesn't mean all the ones we listed yesterday were done intentionally. If you're wondering why he suddenly might be making a joke at his own expense, consider the following: Did you see all the attention Eskin got yesterday after making that Cutch error?

Another argument that might suggest Eskin's recent tweet was intentional is that if you type "chesting" into your phone or computer, it automatically suggests that you correct it to "cheating." Somehow, that didn't happen for Eskin. Could that mean he purposefully made the mistake? Hardly. Here's a theory my wife offered up while reading our previous coverage on Wednesday night...

What if, back when he first got on Twitter, Eskin — or someone acting on his behalf — turned off the autocorrect feature on his phone? Why would anyone do that, you ask? Well, as any sports reporter can tell you, autocorrect can often change the names of players to a more commonly used word. So, unless you actively edit your tweet before you send it and change them back, you might wind up with something like this:

After a few errors like that, Eskin may have felt he could do a better job on his own. And the result has been a flurry of typos that have provided some incredible content. And for that, we thank you. Whether you meant it or not.