One way to increase HPV vaccinations? Let adolescents decide for themselves, study suggests 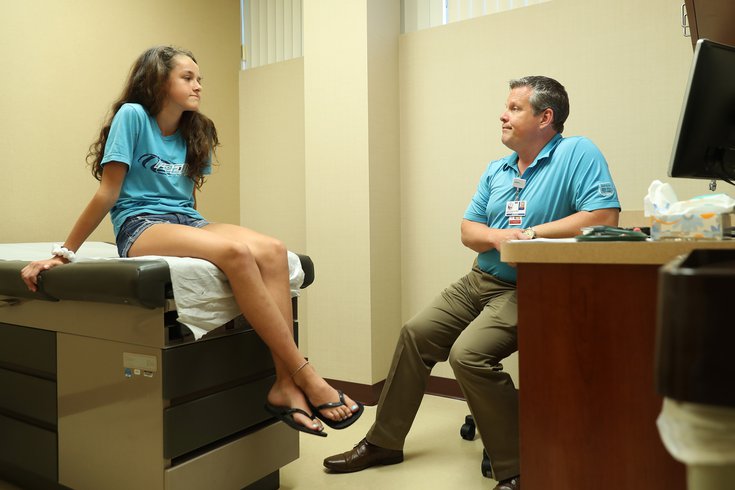 Abby Major and Dr. Erik Johnson share similar expressions after a discussion of the HPV vaccine and its protections against various forms of cancer during a medical appointment at an Amita Health clinic in Illinois in 2018.

Research has shown that the human papillomavirus vaccine is highly effective at preventing cervical and other cancers.

Children are recommended to get the vaccine between ages 11-12, but parental hesitancy about the immunization still remains despite its safety and effectiveness. Only 54% of U.S. adolescents are fully vaccinated against HPV, a lower rate than other vaccines given at this age, including meningitis, tetanus, diphtheria and pertussis.

A new Yale study suggests that taking parental consent out of the equation and empowering adolescents to make their own decisions is one way to increase the HPV vaccination rate.

Eight states – including Delaware – and Washington, D.C. have passed laws allowing adolescents to get the HPV vaccine without parental consent. Some of the laws only allow adolescents to consent for care regarding sexual health and reproduction. Others allow them to consent to broader care.

The researchers said their study, published in JAMA Pediatrics, doesn't prove the consent laws are driving the higher vaccine rates. But they said it is a strategy worth considering.

"It's certainly food for thought," said Dr. Sangini Sheth, an associate professor of obstetrics, gynecology and reproductive sciences at Yale. "I think it could lead to some very interesting policy conversations."

Yet, the Yale researchers also found there was less of a correlation between the consent laws and completing the multi-dose vaccine series.

One possible explanation? Adolescents' ability to make the decision for themselves makes the most difference when initiating the vaccine series, Sheth said. A stronger reminder system for follow-up doses could increase the number of adolescents who become fully vaccinated.

In Pennsylvania and New Jersey, HPV vaccines must be authorized by parents. The other states that empower adolescents to make their own decisions are Alabama, Alaska, California, Idaho, New York, Oregon and South Carolina.

One of the biggest drivers of these laws is parental hesitancy regarding vaccinations.

Earlier this year, a study found that almost two-thirds of parents were unlikely to have their children vaccinated against HPV. Overall, HPV vaccine hesitancy decreased from 69% in 2010 to 63% in 2019, but most of those gains were made by 2012.

Some parents believe the vaccine is unnecessary because their children are not sexually active, the study found. Not having enough information about the vaccine was another reason parents cited for forgoing it.

Yet, studies continue to show the vaccine is safe and effective. The Children's Hospital of Philadelphia reports there have been no cause-effect links between HPV vaccines and adverse events such as blood clots, allergic reactions, strokes, seizures, Guillain-Barré Syndrome, birth defects, miscarriages, infertility or premature ovarian failure, or infant/fetal death.

The U.S. Centers for Disease Control and Prevention also recommends that adolescents receive the Tdap vaccine — which protects against tetanus, diphtheria and pertussis — and a meningitis vaccine that protects against four strains of meningococcal bacteria. For these vaccines, vaccination rates are a lot higher – almost 89% for meningitis and over 90% for Tdap.

Sheth said there is such a stark difference in vaccination rates because the HPV vaccine is perceived differently.

"Whether parents think that the HPV vaccine is somewhat optional, that their children can wait and get it at some later point, or that it's not for all children — none of that is true," she said. "And sometimes the HPV vaccine is not discussed at all."

Advocates of these consent laws say they go hand in hand with public health laws allowing teens to get diagnosis and treatment for sexually transmitted diseases without parental consent. However, there are some experts who are concerned that these laws can divide families.

Dr. Cora Breuner, of Seattle Children's Hospital, previously told NBC News that the better approach is to emphasize to parents the importance of the vaccine in protecting their children's health. Breuner also serves on the American Academy of Pediatrics' committee on adolescence.

The HPV vaccine must be administered as two doses to provide full immunity. Anyone who receives the first dose after their 15th birthday should receive three doses.

Though three HPV vaccines have been approved by the U.S. Food and Drug Administration, only one – Gardasil 9 – has been available in the U.S. since 2016. It was found to be safe and effective in clinical trials involving more than 15,000 people, according to the CDC.