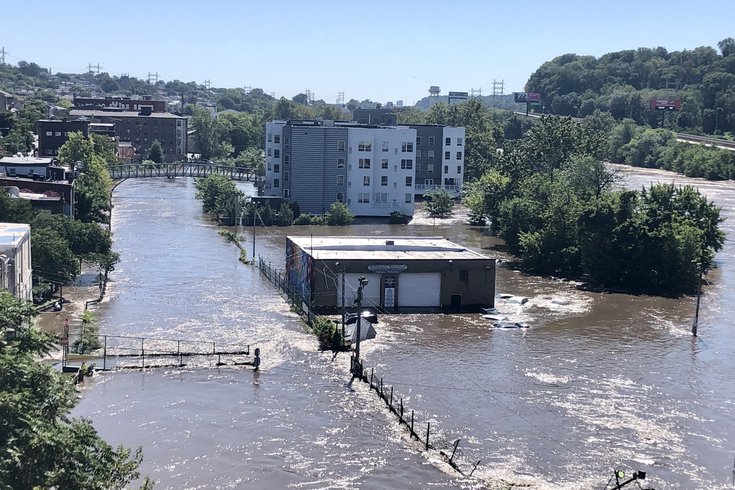 President Joe Biden approved a disaster declaration in Pennsylvania for damage caused by the flooding and tornadoes from former Hurricane Ida earlier this month. Philadelphia, Bucks, Chester, Delaware, Montgomery and York counties are covered by the declaration. This photo shows water from Schuylkill River that flooded the Manayunk Canal and Manayunk Towpath.

Pennsylvania residents impacted by the heavy rainfall, severe flash flooding and tornadoes from the remnants of Hurricane Ida are eligible for federal aid after President Joe Biden approved a disaster declaration in the state.

Biden on Friday granted Gov. Tom Wolf's request for a major disaster declaration allowing assistance to individuals in Philadelphia, Bucks, Chester, Delaware, Montgomery and York counties. The White House said assistance can include "grants for temporary housing and home repairs, low-cost loans to cover uninsured property losses, and other programs to help individuals and business owners recover from the effects of the disaster."

Residents and business owners who sustained losses can begin applying for aid by either registering online or by calling 1-800-621-FEMA (3362). Individuals with hearing and/or speech impairments can call 1-800-462-7585. The White House said those toll-free numbers will operate from 7 a.m. to 9 p.m. seven days a week "until further notice."

"I’m grateful our president has responded swiftly, and the federal government worked with state and local officials to conduct damage assessments and determined that Pennsylvanians are deserving of this critical federal aid," Wolf said. "Pennsylvanians will now have opportunities to receive financial assistance, which will go a long way toward replacing and restoring their property."

With damage assessments ongoing, the White House said more counties may become eligible for federal assistance and more aid could be designated to the state in the coming weeks. Residents across Pennsylvania are eligible for federal funding on a cost-sharing basis to support efforts to mitigate future disasters.

"I urge everyone affected by this historic storm to continue to document all damages and costs incurred with cleanup so that you’re ready to apply for and receive financial support," said Randy Padfield, director of the Pennsylvania Emergency Management Agency.

Did #Ida cause damage to your property? At this time, individuals in 6⃣ PA counties are eligible to apply for disaster assistance: Bucks, Chester, Delaware, Montgomery, Philadelphia & York.

A week after Pennsylvania was hit by Ida's powerful remnants, Wolf said that damage to public infrastructure was estimated at $117 million, “which far exceeds the commonwealth’s threshold of $19.7 million." PEMA is partnering with FEMA and county governments to create disaster recovery centers in impacted communities, according to Wolf.

Ida killed at least five people in Pennsylvania and more than 45 people across the Northeast, according to a report from the Associated Press. Three people were killed in the Philly suburbs as a result of storm damage and flooding.

"I remain grateful to all the first responders who risked their lives during the storm to help people, many of whom were impacted by the storm too,” Wolf said Sept. 8. "I also thank those who continue to provide much needed support to individuals and families who are recovering from devastating losses."