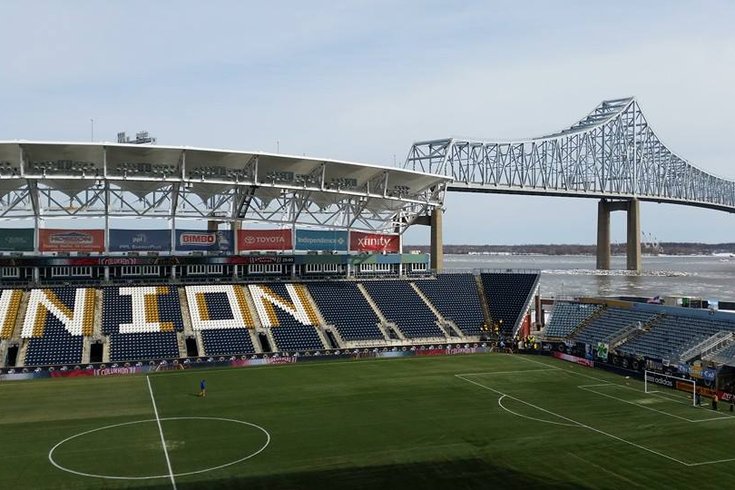 PPL Park, home of the Union.

Not since 2011 has the Philadelphia Union roster turned over this much.

There’s no team in Major League Soccer that cut ties with more players, or added more players this offseason. The club brought in 12 new guys and moved on from 15 others, including three starters and the only two home-grown players on the roster.

That’s a great sign for a team that hasn’t been to playoffs in four years and holds the longest postseason drought in the league. It’s not on the level of a Sam Hinkie rebuild, but Earnie Stewart didn't waste any time reworking the roster in his first transfer window since becoming the club's first Sporting Director.

It was a busy winter, but did every move make sense? The result is a much improved, if unbalanced roster.

This is certainly the best Union midfield ever assembled.

The issue is trying to fit these guys into a shape that works.

With the 4-2-3-1, you're obviously going to play Maurice Edu at the 6 and Vince Nogueira at the 8. Tranquillo Barnetta is expected to start at the 10, so that leaves two wide spots for six players.

Ilsinho and Roland Alberg were the most significant offseason additions, so let's use them to fill out the midfield. Does that mean Chris Pontius, Sebastien Le Toux, Leo Fernandes, and Walter Restrepo all begin the season on the bench?

It feels like the Union "overcorrected" in this department. The commitment to Pontius took place early in the offseason and long before Ilsinho or Alberg had signed. Even with D.C. United picking up some of his salary, is the cap hit justified? Was it necessary to add Pontius if you knew that these foreign signings were in your future plans?

These are good problems to have, and inevitably there will be injuries and absences that require depth across all five midfield spots. Maybe it would have made more sense to put some cash into the forward spot instead of overstocking the midfield, but I think Stewart knows something that we don’t.

It's a young defense with upside, so expect growing pains.

Philly used two of the top three picks in the draft to rebuild the backline. They traded up for Josh Yaro, who will need to produce at the level of a Steve Birnbaum or A.J. Soares to justify the selection.

The team also left Brandon Vincent on the board and reached for Keegan Rosenberry, just months after trading Sheanon Williams to Houston and naming Ray Gaddis as the starting right fullback. Rosenberry needs to push for a starting gig to validate his top-three selection. It's probably not fair to either player, but we're going be comparing Rosenberry and Vincent for the next several years.

That's the nature of the draft; sometimes you end up with Brandon Graham when Earl Thomas is available. Maybe Rosenberry will prove the doubters wrong.

Otherwise, Anderson Conceicao is a journeyman center back with good size and a rather unspectacular resume. Ken Tribbett looked pretty good in preseason and we’ll see if Taylor Washington and Cole Missimo pan out.

Truth is, Maurice Edu is still the best center back on this team.

I think we're all assuming that the front office will pursue a DP striker this summer.

That said, the Union enters the 2016 season with the weakest forward corps in Major League Soccer. The departing Fernando Aristeguieta and Conor Casey were replaced by rookie Fabian Herbers, who is the only depth at forward unless you want to push Le Toux or Pontius up top.

C.J. Sapong had a nice 2015 season and fought through some difficulties both on the field (broken face) and off the field (DUI). He bagged nine goals and four assists and earned himself a contract extension this offseason.

But Sapong is not Kei Kamara. He's not Fanendo Adi, or Cyle Larin or even Will Bruin. He's a 27-year-old forward who was forced to the wing in Kansas City then deemed surplus and shipped to Philly for a draft pick.

The best case scenario is that the improved midfield amplifies Sapong's production. He got very little service from the wingers last season and worked his butt off in a demanding, single-striker system. If Ilsinho, Barnetta, and Alberg can constantly create for Sapong, then he’s going to break the ten-goal mark this year.

Herbers, on the other hand, is an exciting attacking prospect with zero minutes of MLS experience. You never know what a rookie will bring to the table. He could have an impact this spring, or he could come out and struggle.

Fans might be waiting until the summer transfer window for reinforcement at the weakest position on the roster.

In: Matt Jones. Out: Zac MacMath

The best move here wasn't even a player acquisition, it was Jim Curtin's confirmation that Andre Blake will be the day-one starter, which should have happened a long time ago.

Blake will miss time on international duty, so veteran English stopper Matt Jones will get plenty of minutes this year. Jones was an underrated acquisition, certainly overlooked by the myopic segment of the MLS community that still makes Union goalkeeper jokes. You're going to need decent cover at this spot, and now you have it in Jones and John McCarthy, the latter of whom was originally signed to be the third-stringer in 2015.

For the first time in a long time, the GK spot looks to be a position of strength on this team.