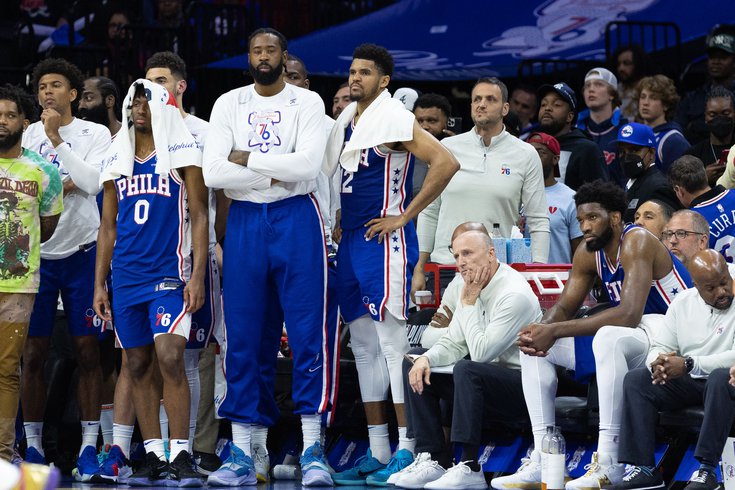 The Sixers have not won in the first round of the NBA Playoffs since 2001.

We can discuss the failings of the roster, the injuries to their best player, the playoff shortcomings of James Harden and Doc Rivers, and so on down the list, but Tobias Harris would have you believe their issues are far simpler than any of that. Where do you look to explain a pair of horrible losses to end the year, losses where the Sixers were barely competitive?

"Mental toughness," Harris said Thursday. "That part of it, I don't think we have yet, right? Seeing the Milwaukee game yesterday, that's a team that's been through the fire, being able to fight and just keep going. I think at times for our group, too many things just affected us as a whole. We drop our heads too much, our body language at times is crappy, and we needed that to be better throughout this series. And I think that hurt us in this series, our mental toughness for sure hurt us versus that group.

"And they did a lot of things to kind of challenge that. The hustle plays, the 50/50 basketballs, everything. The physicality by them as well, we need to be better as a collective group of holding our head and just fighting, just going right back at it, and I don't think we did a great job of that."

Miami, as Doc Rivers was mocked for pointing out after the game, was clearly a better and tougher team than the Sixers at the end of six games. There was no hiding from that fact. But when the word "toughness" is thrown around, it means a lot of different things to a lot of different people. It manifested all across the box score and all across these six games the teams played over the last week and a half.

For starters — the offensive glass. As the Sixers were in the process of folding for good, it was Miami who kept twisting the knife sticking out of their back, running through and around Philadelphia players for rebounds. They more than doubled them up in the final game, and the series count ended at 60-42 in favor of Miami, an accurate reflection of how badly they were pasted across six games.

Nobody embodied the difference in this series quite like Jimmy Butler, who absolutely dominated the Sixers in the final four games. There he was, soaring for an offensive rebound and putting two points on the board with a putback. There he was, leaking out in transition and Moss-ing Philadelphia players on long outlets to get Miami set up. He dug down and got his hands on many a driver, and he beat almost literally every Sixers player in isolation at one point or another, working around his diminished outside touch with absolute mastery of the in-between.

The story Butler tells now is filled with half-truths and outright fabrications to spin his career as the cost of being a hero, despite whatever evidence exists to the contrary. Butler crowing in the Game 6 tunnel that the Sixers chose Tobias Harris over him in the moments after the game, for example, is roughly the fourth or fifth time there has been an attempt to rewrite what happened.

It doesn't make the end result any less devastating. He was the player built for this moment, the guy who developed a closer relationship to their franchise player than any other high-level guy he has played with. His departure was not under the control of any of the important people in place for this Sixers regime, but it looks increasingly like the moment it all went south when the organization backed the fragile young star who eventually forced his way out of town anyway.

Even when Butler started slow in the series and within some of those aforementioned dominant performances, there was never a moment where you felt he was on the fringes of the game, mixing it up in some form or fashion. A tone was set that most of his teammates followed, in part because they are built to. You could make a strong case that PJ Tucker threw his weight around more than the Sixers managed to as a collective across six games. Bam Adebayo might be giving up size to Joel Embiid, but he made his opponent battle for every inch, hell, every touch that he was able to get.

It was telling that Embiid, doing his damndest to avoid making proclamations about the roster and what he wants to be done to it, spent a good chunk of his postgame reflecting on PJ Tucker's contributions specifically.

"When you have size and toughness, that goes a long way. You look at someone like PJ Tucker, great player, but it's not about him knocking down shots, it's about what he does, whether it's on the defensive end or rebounding the ball," Embiid said. "Defensively, plays with so much energy, believes that he can get from point A to point B, and he believes that no can beat him, and he's tough. He's just physical and he's tough, and they have a few of those guys."

"Since I've been here, I'd be lying if I said we've had those type of guys. Nothing against what we have, it's just the truth. We never have PJ Tucker, that's really what I'm trying to say. I think physicality, once you get to the playoffs or the later rounds, you need that, you need those guys that are really tough."

With Embiid at less than full strength, the Sixers had nothing but finesse to offer in a street fight, no great equalizer to change the tone and tempo. Even with Danny Green, who suffered a gruesome leg injury early in the Game 6 loss, that would have remained true.

This was not a team that lacked resilience on a broader scale. They did indeed absorb the loss of one of their most important players to a publicly-waged battle with the franchise. But none of that meant anything when they had to come together and fight on the floor when the lights were brightest.

"Yeah, the team faced a whole lot of adversity [this season]. Truth be told, every team goes through some sort of adversity, and honestly, everything we went through, we still had enough talent and enough firepower to fight for a championship," Harris said. "And we weren't able to do that to the best of our ability. That sucks, and it's disappointing. Everything that happened prior really doesn't truly affect the present moment right now. We still had a golden opportunity to take advantage of this series and see where that led us, and we didn't do it."

The immediate question that must be asked is where Philadelphia expects toughness to come from. They are not a group that has anyone who could be considered a "back against the wall" guy, a leader who can rally the troops, raise his hand and say, "I got this" when the chips are down. This playoff run is where we hoped to learn if Embiid was that guy, and injuries robbed us of the opportunity. In the end, he looked to have nothing left to give, hunched over between possessions from the sheer exhaustion of trying to be out there for his team.

There is certainly no evidence that James Harden is going to be the well they draw from when times get tough, not based on this run or the entirety of his career to date. His second half of Game 6 will be plastered all over the media for good reason, yet another disappearance in a spot where his team needed him most. And unlike Embiid — hell, even unlike Ben Simmons — there is no making up for that with his defensive contributions, Harden fighting just to tread water there at his best.

The hope for this version of the Sixers rests on Harden using the offseason to reclaim some of his burst, something he was excited about reflecting on the season, to be a dominant enough force on offense that nothing else matters.

"I'm excited man, I've been trying to get right throughout the course of a basketball season for two years straight," Harden said Thursday. "And it's like, that's not it. All last summer, I was rehabbing, and it was a little frustrating because I'm not used to going through something like that. It is what it is, and I'm just happy to be healthy now. I got a full summer to be straight, and do the things necessary to come back even better next year."

Even then, even if Harden comes back resembling something closer to his former self, the Sixers are not built to be a bruising, hit-first team.

Their best perimeter defender was barely playable in the playoffs due to vaccination mandates and his own pitiful offensive repertoire. Tyrese Maxey, bless him and his development, was absolutely drawing dead on most perimeter assignments in the Heat series, a fact he will never be able to avoid as a small guard playing in a lineup with Harden. Harris, who deserves credit for figuring out his place in this ecosystem, still ultimately came up way too small when they needed him most. And it gets uglier further down the bench, with the likes of Furkan Korkmaz, Georges Niang, and others hardly looking like guys who can hold up for a run at a title.

The Sixers, perhaps knowing all of this, would not take the road out that led to blaming the coach. It would have been an easy out for Embiid, the beloved, beaten and bruised franchise player pushing the oft-maligned Rivers out the exit door. But that didn't happen, Embiid looking at himself and the players on the floor to explain their failure.

"I believe that we have the right people. I think at some point you got to stop looking at coaching or front office, you got to look at the players," Embiid said. "Maybe they're just not good enough. I'm not trying to blame anybody. The players also got to do their jobs, it doesn't matter how much a coach or GM talks to you or try to motivate you, if you still go out there and don't do your job, and the other team is more physical than you, that's on the players."

"I don't think at this point we should need anybody to motivate us. This is our job. If you're really serious about winning, I don't need anybody to be in my ear about playing hard and doing my job. This is what I get paid for and I love doing it."

It sets up another interesting summer ahead, one where the Sixers have to figure out how to transform this group into a real-deal contender instead of a team that just hints at being one on their best days. What they're missing is hard to quantify, hard to scheme into the team, hard to pull off without trades that aren't realistic with the state of their cap sheet.

To win titles, you can't simply win games when everything is clicking. You need to be Andy Dufresne, coming out victorious even when you have to swim through shit to get there. The Sixers, by their own admission, never made it past ankle-deep.

"That's truly the disappointing factor," Harris said Thursday. "I could see if we came out and just gave it 100 percent effort, gave it the greatest effort we could and just lost. But that wasn't the case in this series."