10 years ago today: Sixers upset the No. 1 Bulls in playoffs 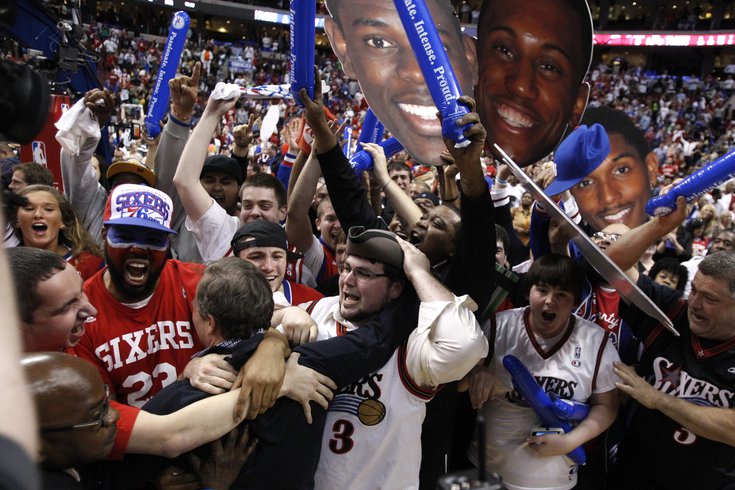 Sixers fans celebrate a playoff victory over the Bulls in 2012.

While the Sixers are attempting to pull ahead in their series with the Heat on Tuesday night, this day also marks the 10th anniversary of one of the most memorable times in modern Sixers history. On May 10, 2012, the Sixers beat the Chicago Bulls in Game 6 of their first-round matchup, advancing to the second round of the playoffs for the first time in nine years.

An eighth seed going against the No. 1 team in the East, the Sixers pulled off a dramatic end-of-game sequence that gave them a 79-78 win to clinch the series:

The #8 seed Sixers take down #1 Chicago Bulls to take the series.

Andre Iguodala went coast-to-coast off a rebound with just seconds remaining, got fouled, went to the free throw line and sunk both shots to put the Sixers ahead. Iguodala shot just 61.7 percent from the line that season, a year in which he made his lone career All-Star appearance. As someone who was sitting in the Wells Fargo Center that night in Jordan 11s and a Sixers fitted hat, I can attest that confidence was not sky high that Iguodala would make those free throws.

It was an odd situation the Sixers found themselves in. 2012 was a lockout-shortened campaign with the Sixers going 35-31 under head coach Doug Collins and grabbing the final playoff spot in the East. Normally, the Bulls would've wiped the floor with the Sixers, but Chicago star Derrick Rose ended up tearing his ACL late in Game 1 of the series, an injury he would essentially never recover from. Center Joakim Noah also missed Games 4, 5 and 6 that round.

It didn't matter in my mind though.

I was 18, a senior in high school and a diseased Sixers fan who had not known quality basketball in a long time. It was a fool's gold win perhaps given that the core had no future upside and would ultimately be broken up later that summer, but in the moment, it felt like all my basketball dreams had come true. Walking out of the Wells Fargo Center that night, it was as if I was in a celebration out of a Disney Channel original movie.

As much as that's one of my favorite basketball memories ever, it's sad that it's one of my favorite basketball memories ever. A first-round win over a team missing their two best players in a Mickey Mouse season stood as the greatest thing that happened as a Sixers fan between the end of the Allen Iverson era and the 2018 Sixers. Yikes. This is the last two decades of Philadelphia hoops summed up. This is why the Process had such fervent support. This is why Joel Embiid was worth the wait. This is why the James Harden trade is supposed to complete the puzzle.

These types of memories are things I'd absolutely destroy other fan bases for. I'm terrified to ever step foot in the state of Minnesota for the unending jokes and tweets I've sent to Vikings fans over the years for celebrating their 2017 team that ran into the buzzsaw that is Nicholas Edward Foles. There is a bit of loser energy to loving something that was so minuscule in the grand scheme of the 2012 NBA season, right? I don't know. Fun is fun. It's okay to enjoy things. It's okay to cherish games and moments even if they didn't result in the ultimate goal (unless you're a Vikings fan).

The Sixers have advanced to the second round four times since that night in 2012, but have yet to reach the glory of the Eastern Conference Finals in 21 years. That gap is longer than some Sixers fans have been alive.

I can't predict what the rest of theis Sixers' postseason brings, but I'm optimistic. Maybe another snotty, yet idealistic, 18-year-old kid will see something this spring or summer that they remember forever.