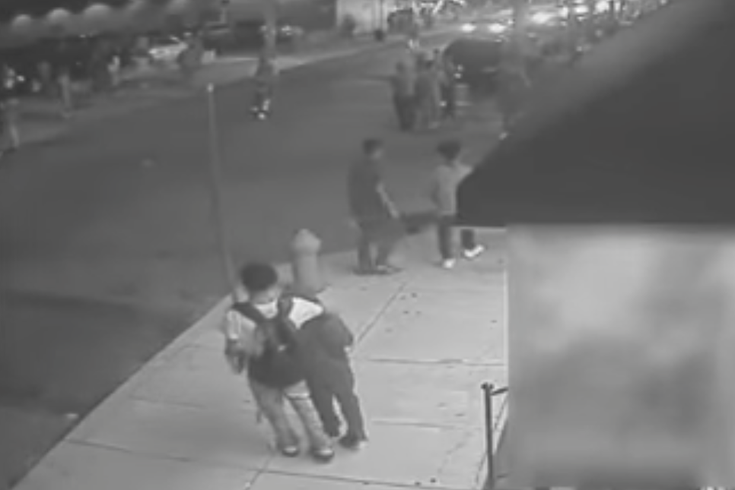 Philadelphia police are investigating assaults and a robbery that took place near Temple University on Friday, Oct. 21, 2016. Police have blamed the incident on a flash mob. So far, two males have been arrested, and as many as 20 other juveniles are being sought.

Police have increased their presence around a Philadelphia college as harrowing accounts of assaults over recent weeks are starting to emerge.

Over the course of the evening, police said there were large groups of juveniles — including a group of "75 to 100" on one corner, according to police — roaming Broad Street.

University police told The Temple News, the independent student newspaper, on Saturday that the incident involved minors “at different points along Broad Street starting fighting and then harassing students.”

In fact, according to the Philadelphia police, there were three separate incidents of assault — as well as a robbery  — on Friday night in the vicinity of Temple University.

On Tuesday, Philadelphia police released surveillance video showing some of the flash mob.

According to a statement from Temple University, a group of individuals began converging at Broad and Oxford streets at about 6:45 p.m. following social media posts allegedly organizing the meet up.

But criminal incidents allegedly involving the flash mob didn't begin until about 8:30 p.m., police said, with a robbery that occurred along the 1400 block of W. Oxford Street.

According to police, a 19-year-old woman — who has been identified by her father as Christina Lauletta — and two men aged 19 and 20, were assaulted by group of about 20 juvenile boys and girls, who "kicked, punched and knocked to the ground" the three victims.

Lauletta's cell phone was stolen in this incident.

Following that incident, and with descriptions of the attackers from the victims, police said they apprehended a 15-year-old male and a 17-year-old male shortly after the incident and both have been charged with aggravated assault, robbery, and related offenses.

Then, about a half hour later, police said, a 15-year-old male was arrested after he allegedly assaulted a Temple Police officer along the 1900 block of N. Broad Street.

According to police, the officer, who police did not identify on Monday, approached the juvenile when she spotted him throwing rocks at cars along the 1600 block of N. Broad Street.

Police said that at the time, there were a large number of juveniles on the street — in a release, law enforcement officials called the group a flash mob — and the juvenile disappeared into the group. However, police said, the Temple officer followed the group, where approximately a half hour later she saw the same male along the 1800 block of North Broad Street.

The Temple University officer, along with an officer of the Philadelphia police then approached the juvenile, but police said, he took off running.

When the officers chased the male in an attempt to apprehend him, the juvenile spun around and threw the Temple University officer to the ground, causing her to fall on top of her bike, police said.

The juvenile then ran before he was apprehended on the 2000 block of Broad Street.

The 15-year-old male was arrested and charged with aggravated assault, propulsion of a missile (for throwing the rock), simple assault, resisting arrest and related offenses.

The Temple University officer suffered bruising to her left leg and a scrape on her knee, police said.

At about 9:10 p.m., along the 1700 block of North Broad Street, a Philadelphia police horse was punched in the face, law enforcement officials said.

At this time, police said, a group of mounted officers were following a group of about 75 to 100 individuals on Broad Street, when an unidentified 16-year-old male stepped up to an officer's horse, punched it in the face twice, and fled.

The juvenile was apprehended shortly after and has been charged with assault on a police service animal.

Finally, police said, at about 9:20 p.m., an 18-year-old woman along with two 19-year-old men, told police they were accosted by "a large group of males and females in their teens" who surrounded the three victims as they stood outside a business along the 1700 block of Cecil. B. Moore Avenue.

According to police, the group used "hand and foot" to assault the three victims, and the female victim suffered scrapes and cuts to her legs. Also, the woman's cell phone was smashed on the ground and a debit card was taken our of her purse, while law enforcement officials said the two male victims also had a cell phone, wallet, a backpack and a wireless speaker, stolen in this incident.

On Monday afternoon, Joe Lauletta said his daughter, Christina, was recuperating well after she was robbed. Lauletta wrote about his daughter's ordeal in a post that has been shared on Facebook more than 2,870 times as of Monday morning.

In the post, Lauletta said that his daughter, a Temple student, and her friends were "badly beaten by a group of 30-40 black teenagers on their way home from the Temple football game."

The incident sent his daughter to the hospital after the group reportedly "held her down and kicked and stomped on her repeatedly."

"It was nasty," he said during an interview Monday afternoon. "They beat her up, pulled her hair ... Every part of her was bruised."

According to Lauletta, his daughter and her friends were walking home after leaving the Temple football game early when a group of teenagers "turned a corner and swarmed her."

On Friday evening, the Temple football team hosted a game against the University of South Florida at Lincoln Financial Field in South Philly. The contest kicked off at 7 p.m. and concluded around 10:30 p.m.

Another student told The Temple Tab that a group had formed as early as 7:45 p.m. and witnessed multiple assaults:

“I only walked around it when the crowd first started forming on Broad in front of where Burger King and Koja Grille are. It had to be over 100 people, various ages from middle school to high school.

“The mob I walked passed by started to form around 7:45pm after I walked from Rite Aid to the IBC.”

Temple police encountered a similar crowd along Broad Street the previous Saturday night, but a campus alert was not issued.

Last week, a female student was targeted in an armed robbery near the intersection of Ninth and Berks streets. During that incident, the victim was struck over the head with a rock and had her cellphone stolen. The school issued a campus alert to warn students to avoid the area.

Earlier this year, Temple officials announced they would increase off-campus policing to address the safety of both students and residents of the surrounding neighborhoods.