A microchip led to dog's return three years after being stolen 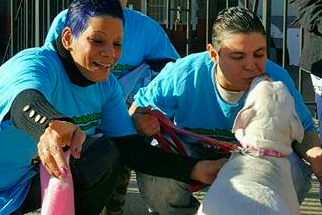 Rihanna, a boxer mix stolen three years ago from a backyard in the Bronx, was recently reunited with her family by a South Jersey animal shelter using her microchip information.

It was an incredible journey for Rihanna, a white boxer mix who ended up in a Camden County animal shelter, and her family from the Bronx.

It took three years and more than 100 miles for a microchip to reunite them, with a bit of an assist from the Voorhees Animal Orphanage.

While still a puppy, the dog was stolen out of Maria Gonzalez’s backyard.

Heartbroken, the Gonzalez family clung to hope that they would see the dog again.

On Feb. 18, the phone rang, telling the family the dog had turned up and the identifying microchip had helped the South Jersey animal shelter track down the Gonzalez’s.

When she was scanned the next day, shelter workers found the dog had been reported stolen.

Workers at the shelter recently returned the dog to the Gonzalez family.

“In this case, given all that the family and the dog had been through over nearly three years -- nothing short of a miracle. Everyone at the Voorhees Animal Orphanage was thrilled to play a part in such a happy reunion,” she added.

Robert and Dixie Heininger, the Voorhees couple who reunited Rihanna with her family, uploaded a heartwarming video of the special occasion.