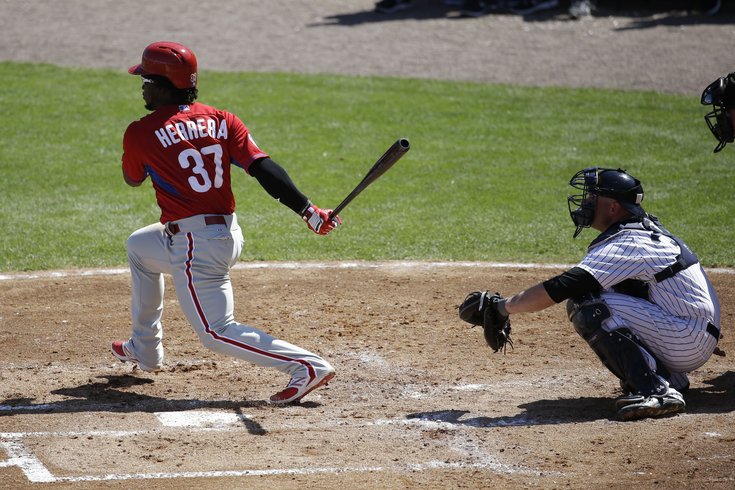 Odubel Herrera hasn't played in a game in 10 days. When asked whether he'd be ready for Opening Day, he let out a belly laugh: "Of course."

CLEARWATER, Fla. – With the Phillies moving closer to leaving Clearwater – camp breaks a week from tomorrow – general manager Matt Klentak would like to get some kind of clarity on the status of his outfield, and most importantly, the status of his starting center fielder.

But Klentak said no one he’s spoken with seems to be very concerned about Odubel Herrera, who hasn’t played in a game since March 12 after bruising his left middle finger a week earlier. And so he is moving toward coming up with the final composition of his roster with the assumption that Herrera will be ready to go on April 4, when the Phillies open the season in Cincinnati.

Although manager Pete Mackanin admitted he was concerned a day earlier, Herrera, for the second straight day, downplayed any worries over his status and was more than confident he’ll be back on the field before the Phils play their final handful of exhibition games next week.

“It’s a little bit behind, nothing major,” said Herrera, who referred to the injury as a bruise. “I’m getting treatment on it and it feels better today.”

Herrera, who suffered the injury when he slid headfirst into home on March 6, had an X-ray on the finger last week (it was negative). The hand was re-examined this morning in Clearwater.

The takeaway: Herrera will wear a small guard on his finger while he hits until it heals completely.

“I saw a doctor this morning, there’s a little bit of inflammation left,” Herrera said. “I felt a lot better (hitting) with the finger guard on.”

Herrera has not taken live batting practice in the last week but has progressed toward hitting off a tee and off soft toss during his 10-day absence from games. He expects to be back on the field before the end of the weekend.

Herrera let out a hearty laugh when asked if he’d be ready in time for Opening Day, 13 days from Tuesday.

Of the outfielders that patrolled Citizens Bank Park at the end of 2016, Herrera still remains the most likely to be on the field in April.

“It’s not to the point where it’s hurt anymore,” Asche said following a productive hitting session. “It’s more where you’ve got to just get over mental hurdles. It’s like if you broke a foot and you wanted to go running. It’s going to take baby steps. It’s such a violent movement.”

Asche remains almost certain to begin the regular season on the disabled list.

“It is what it is,” said Asche, who has missed the entirety of the Grapefruit League schedule. “Like I said before, (the Phillies) are going to act in the best interest in me.”

Is it even remotely possible he could be cleared for enough games at some point in the next weekend and then be ready to go for Opening Day?

“You know, it’s really hard to tell because I’ve never been in this situation before,” he said. “I’ve always just gotten my spring training at-bats and then even if I didn’t feel good hitting I just went and played, so it would be unfair for me to tell you guys that. It would unfair to everybody making decisions, too.”

The outfielder who certainly will begin the season on the DL returned to the clubhouse for the first time since his surgery a few hours earlier. Aaron Altherr will wear a cast on his left hand for four more weeks following wrist surgery.

While Asche was considered to be on the outside looking in for an everyday job in the outfield at the outset of the 2016 season, Altherr was a heavy front-runner for the regular right field job until he dived and landed awkwardly on his glove hand on March 4.

“Definitely, it's disappointing,” Altherr said. “Stuff like this happens and you just deal with it and move on. I'm just trying to get back stronger and better than ever and get back playing before the season's over.”

Before Altherr’s surgery, the prognosis was that he would be sidelined for 4-6 months. With the latter end of that taking him into the final month of the season, it’s worth wondering if it even makes sense to put him back on the field in 2016.

But the 25-year-old has obviously made getting back on the field in August or September a clear goal.

“Oh definitely – no doubt,” he said. “I definitely can see myself being back sometime before the season's over. Definitely I have that goal in mind to get back before then. … Everybody heals differently. It's just a matter of how my body feels and how it feels after I can start rehabbing and moving around. It's really up to me how I feel and how soon I can be back.”