Infrequently Asked Questions: Why do sports fans say 'we' won a game? 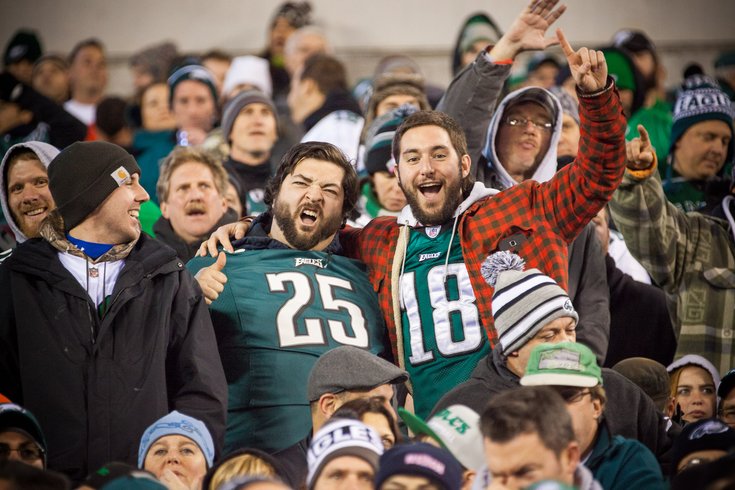 Eagles fans at the Dec. 14, 2014, game against the Dallas Cowboys at Lincoln Financial Field.

Sports are pervasive. Team logos brand our clothing, television broadcasts eat up our Sundays (and Mondays, and Thursdays ...) and celebrities even use them as ammunition for Twitter warfare. As kids, we practically have a favorite sports team before we ever have a favorite color. But as invested as we all are, why are sports fans constantly "we-ing" all over the place when their sports team of choice wins a game? After all, Joe the Eagles Fan didn't exactly catch the ball in the end zone from his sofa.

We reached out to Jeremy Jordan, director of the Sport Industry Research Center at Temple University, for some insight.

Why do we say 'we' won a sports game when, in fact, the sports fan on the couch didn't win anything?

It has to do with our psychological attachment to a team, and in the literature, it’s called 'fan identification.' So, [the common term is] 'BIRGing,' which means 'basking in reflected glory.' When the team is successful, we tend to associate that we’re part of the team as well, so that's why you hear 'We played great,' and that’s because of this high level of identification we have with the team that supports our own self-esteem. We associate the success of the team with our own success.

... It really comes out of research in psychology [in the ‘90s], where people were studying team identification. For example, how strongly I identify with the Philadelphia Eagles. And what they found was that for some people, it’s part of their self-esteem. So when the Eagles do well, it makes me feel better about myself and it also is part of my membership in a group. Other people stand around and have this shared experience, and that relates to group membership and individual self-esteem. One of the ways we retain our strong connection to the team is by really connecting ourselves as closely as possible, so when the team does well, in some ways, we’re part of that accomplishment.

Is this why Philadelphians might be braggy on a Monday morning? To 'BIRG' is to brag?

Yeah, there’s actually been research where they’ve gone onto a college campus, and after a big win, or after a team has won a game, they’ve observed the propensity of people to wear branded apparel. So, if Temple beats Notre Dame this Saturday, on Monday, you’ll more than likely see a lot more Temple paraphernalia around campus. That’s part of how we express that affiliation as well.

And it works in reverse as well?

Yes. There’s also something called 'CORFing,' which is 'cutting off from reflected failure.' Obviously, people have varying levels of identification with a team – some people are highly identified, die-hard fanatics. And other people are casual fans or less connected. So people who are not highly connected in a team can engage in 'CORFing,' which is, when a team does bad, distancing yourself from a team in the process. And the reason for this is it’s a way of maintaining self-esteem. By saying 'they’re' really bad.

For example, the Phillies this year: There were a lot of people down on the Phillies because they didn’t have a very good year. For people not highly identified, they may no longer try to attach to them as a team and may start to refer to it as 'them' and 'they' and kind of distance themselves in that way. What’s interesting about that is, for people highly identified, fanatics, they aren’t able to do that because it’s such a part of who they are.

There’s another mechanism called 'blasting,' which is when they tend to deflect the failure of the team onto the opposing team, or to the opposing team’s fans, or the officials. This is where we’re unable to blame our own team because we’re so highly identified and connected. We blame other parties within the activity. Again, other coaches, teams and refs, and that’s a way to manage the disappointment and failure of our team.

What does this mean for sports in a practical sense? Is there anything useful to knowing this?

From a team perspective, you want highly identified fans. You want mechanisms that make them feel connected to the team because that increases their consumption behavior. Fans who are more highly identified with the team are probably going to go to more games, watch it on TV, read about it, buy more merchandise, and they’re going to, if they can afford it, buy season tickets. All of those things. Really, there’s an underlying principle of loyalty. For the highly identified, it can be very difficult to give up on a team, because it’s such a big part of who they are. And that loyalty is something that teams want as well.

I suppose the negative is, if you have a really highly identified fan base and you have a failure, one of the ways for them to maintain self-esteem is lashing out at other fans, or officials, or coaches or the other team, and sometimes that’s where you’ll see fan aggression and acts of violence and things like that. We care too much, a little bit.

How does Philadelphia fit into this? Do you think we 'BIRG' more than others, or are we falling in line with everyone else?

You know, I think Philly’s known for having very passionate fans, obviously. Another way to say that, is they have highly identified fans. There are a lot of people who -- you know, Philly teams are a big part of who [Philadelphians] are in the fabric of their lives, and so I think that passion can be a very positive thing and make for a very loyal fan base. And when you have a group that’s highly identified, it’s difficult then to process the failure of the team. So Philly is, whether right or wrong, known for having fans act out in maybe aggressive ways. I think when you look at 'BIRGing,' 'CORFing' and 'blasting,' Philly is a great example of those things, and I think you can really easily pinpoint or identify how those principles function in our community.