Ink brings in the tattoo customers, lifestyle makes them stay 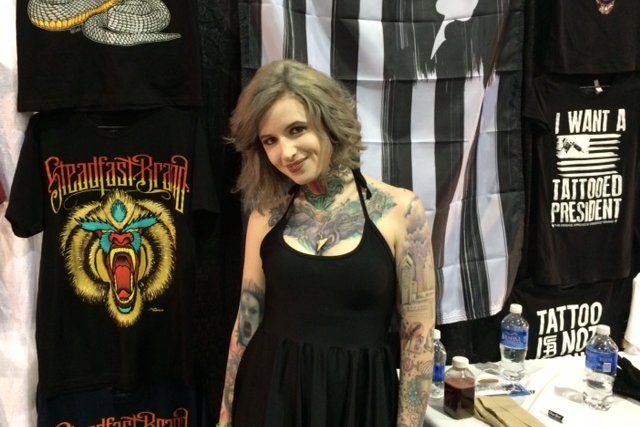 Emmy Szadyr, a vendor at the tattoo convention at the Pennsylvania Convention Center, believes the tat lifestyle is what holds customers, not just the ink.

Ink is the reason to go to a tattoo convention, Emmy Sazadyr admitted at the Philadelphia Tattoo Arts convention on Saturday

After all, she said, she’s like a walking advertisement, tats visible from neck to ankle. Which is why she was working a vendor booth.

But what brings people back and makes them stay longer at a convention is the tattoo lifestyle, Sazadyr said, showing off the T-shirts and hoodies she sells for Steadfast Brand, an Orlando-based company.

As she pointed out, her mother, who has just two small tattoos because she works in a hospital, dons ink-inspired T-shirts “to be in the culture, even if she doesn’t have as many tattoos as she’d like.”

Sazadyr added that some folks buy shirts with a design from an artist they otherwise can’t afford.

York, Pennsylvania’s Amy Wagner, whose husband, Shawn A. Wagner, and son, Shawn L. Wagner, are independent tattoo artists, was there for the ink – and the fashion.

The guys were stocking up on ink – a whole backpack full – and she was carrying shirts in a plastic bag reading “Addicted to Ink.”

The Wagners said to credit the U.S. Navy, biker culture and Harley-Davidson – from York – for the spread of tattoos.

Arthur Rose, in from Union County, New Jersey, was getting a video game stenciled on his leg by Lisa Doll with the Rose Red Tattoo shop in Ellicott City, Maryland.

He expected the procedure to take perhaps 90 minutes and join art he started acquiring at 18.

Sometimes they have something specific in mind, sometimes they are window-shopping for an artist whose style matches their design.

Franczak said attending conventions is necessary to establish credentials and gain a following.